Sit down for a minute, and let me share a story with you. A story that just ten years ago, I could never imagine myself sharing.

Yesterday, I took my son to gymnastics. Since his sister is two, and cannot sit still for 55 minutes, my husband kept her at home. We planned to meet at a nearby Mexican restaurant when class was over.

Naturally, he brought Holland to dinner in the clothes she was wearing at home: A unicorn dress with a rainbow tutu, complete with a horn and flowers. 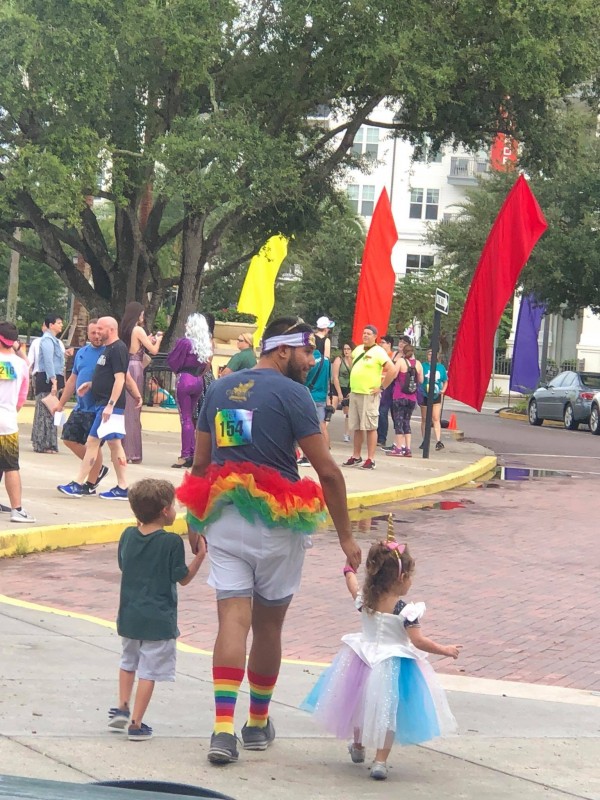 What we didn’t know is that the Mexican restaurant was twenty yards away from the starting line of a gay pride event in our neighborhood.

It was the annual “Drag Race”, which you can probably tell by the picture, was not exactly a NASCAR event.

Incidentally, Holland was FABULOUSLY prepared for the party and it didn’t take long before she was engaged with a neighboring table, discussing rainbows and unicorns and tutus.

After some chatter between the adults, we decided to push our tables together and watch the race together as new friends. We ate chips and salsa and talked about raising kids and schools nearby.

Everything was pretty typical. I mean, other than the fact my daughter was dressed up with hundreds of strangers who made a point to treat her like a princess.

My son, a curious kid, is a little older than Holland. So he asked innocent questions that a boy might have when he sees a man wearing a tutu for the first time.

But he wasn’t scared. And he sure as heck wasn’t bothered.

He was just unfamiliar. So, he simply attempted to BECOME familiar.

Isn’t that so beautiful about children?

They are naturally inclusive, innocent, curious, and loving. Their first instinct isn’t that something unknown is dangerous or bad.

They look to their parents for that guidance

And how we respond in those moments of curiosity forever shapes how they will approach the world.

Now, I’m not sure how you were raised, or where, or if you have any experience with the gay community in your area.

But let me tell you what my experience has been: this group of human beings (LGBTQ) is the most inclusive, warm, and loving group I’ve ever encountered, and I’ve been a church-going Christian most my life.

But that didn’t stop multiple families from turning on their heels when they happened upon the Drag Race on Sunday. No less than six families ushered their children back to their cars and found somewhere else to eat their dinner.

Somewhere, I presume, unaffected by the evils of tutus and Lady Gaga and exuberant strutting.

I know those folks.

I have been those folks.

You see, I grew up a small town Alabama girl. And while I was never taught to hate gay people, I was never encouraged to know them, either. They existed, I believed, “out there” somewhere.

Proverbial unicorns that I never would know personally, and would therefore never have to understand.

It is not enough to teach your children NOT to hate.

You must teach them to actively LOVE.

You can’t avoid people you don’t understand and you shouldn’t teach your children to do that, either.

Look around at the world we are living in right now.

Hate is gaining a serious foothold in our society, and the only way to push back is to GET ACQUAINTED with one another.

Let the children lead the way. Be like the kids.

Ask the questions. Make the friends. Wear the hell out of the rainbow tutu. (Or don’t.)

But no matter what your beliefs or orientation, I’ve got news for you:

You can’t claim to “love thy neighbor” if you never get to know them.

My New Best Friend: Advocacy for Kindness, Inclusion, and Representation
My dad was in the KKK: Here’s how I undid the damage
The answer to racism, from the mind of a boy with autism
advertisement

My New Best Friend: Advocacy for Kindness, Inclusion, and Representation
My dad was in the KKK: Here’s how I undid the damage
The answer to racism, from the mind of a boy with autism