When I hear the word 'abortion'

For weeks my social media feed has been swarmed with conversations surrounding abortion. I’ve read articles discussing the horrors of late-term abortion, angry pleas to legislators to reconsider new abortion laws, and stories of women who ended the life of their child for a host of different reasons.

I’ve often thought of what I might add to this conversation. For so long I thought it would be Johnny’s story I would use to share my thoughts on abortion. I would tell of the beautiful, perfectly formed baby boy that I held in my arms after a mere 14 weeks and 5 days gestation. Our first tiny triplet son that I delivered at home that warm summer morning was just that…perfect. His long fingers and toes reminded me of his Pawpaw. His sweet face looked as though he was simply taking a nap. Never mind the fact that he fit into the palm of my hand. I wanted everyone to see that he was already a baby in every sense of the word even at 14 weeks. How could anyone abort their baby if they could see how “human” they are so early on in pregnancy?

That’s the story I thought I would tell. But sitting here today, when this topic is weighing on so many people’s mind, I find myself finally ready to tell an entirely different story. 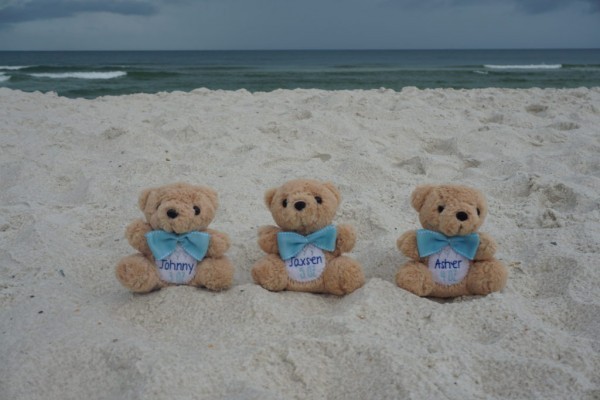 Over the years I have shared about our struggles with infertility, the loss of our triplets, parenting after loss, and our journey with adoption. I have chosen to be open about every detail of my walk through motherhood in hopes of supporting someone else that might be navigating a similar path. There is one story I’ve never shared, though. I’ve never shared Asher’s story. Not the whole story anyway.

There are four words I have always left out of his story. Four words that I’ve never spoken out loud or so much as typed onto my computer screen.

I had an abortion.

Saying it, even now, sounds strange. I argue that he was one of the most wanted little boys in the entire world. I had been flat on my back fighting for his life for 16 days before making the decision. The decision that ended his life.

I had made it to 17 weeks pregnant with our remaining two triplet sons after Johnny’s passing. I had never wanted something as badly as I wanted them to survive. But in the early hours of the morning, Jaxsen couldn’t be held inside any longer, even through the stitches placed carefully to prevent his birth. I was sick. Horribly sick. An infection coursed through my body, and the babies and I wouldn’t all be able to survive the cards we had been dealt.

I’m often taken back to the moment when the doctor stood over my bed telling my husband and I that I needed to be rushed into surgery, but that our final baby would likely not survive. It plays back in slow motion now eight years later. I can still see my husband’s head solemnly nod in agreement before I blacked out.

I woke up hours later after surgery and knew my womb was empty. I wasn’t conscious when Asher was taken from my body. He is my only baby I don’t remember delivering. One minute he was safe inside my belly, and then he was gone. The weeks and months that followed were gut-wrenching, empty, and numb.

It wasn’t until months later that I even thought about what really happened that day. I was sifting through a pile of mail, when I ripped open yet another medical bill. As I read through the insane charges, I realized what I was being billed for. My abortion. I trembled in horror as I read the words. It must be some mistake. Who was playing this cruel joke on me?

You see I never really thought about the fact that my husband and I had chosen my life over our son’s. It’s true that he just could not have survived at such a young gestation, yet he wasn’t born under his own terms. A doctor removed him from my womb to save me. He was still alive and well until the procedure. Medically what I had done was just that, an abortion.

I bet that when my friends share articles about abortion online they don’t imagine the range of emotions someone like me might be feeling. When I read the word “abortion” my head starts to swirl. I question the decision we made in the hospital that morning. I know that no one looks at me, the mom of four, as someone who has been affected by abortion. Strangers could never see the pain and devastation that I carry with me always.

I know those close to me would never judge me, but I worry for women that do not have a support system. What message do these accusatory, no room for discussion articles send to women who have no choice about their child’s future. What do they say to the young woman who truly feels like abortion is her only choice?

I guess I’m confused with my feelings about abortion. I’ve never been one to judge someone for such a deeply personal decision, but I am also horrified at the thought of terminating a pregnancy without medical necessity. Am I pro-life? Am I pro-choice? My thoughts start to blur when I think about where I stand on such an important issue.

I do know that no two abortion stories are the same. I know that some might say I don’t have the right to share my story because it “isn’t that bad.” But my baby died because of a decision I made. Whether I had an option or not, I will carry that choice with me forever.

I share this story now because I think it is important. I share it for the fact that it might matter to even one other person. Maybe a mother out there can relate to my feelings of regret about the decision I made. Maybe a woman needs to know that there is life after abortion. I will carry the hurt with me always, but I have found a way to have peace and happiness in my life once again. Maybe they can too.

Most importantly, I hope to illustrate the point that maybe abortion isn’t as black and white as we wish to make it. Perhaps it is a debate with no resolution in sight. What I do know is that if we navigate the conversation while keeping our hearts open and full of love for the very people that are connected to the tiny humans we wish to save, we might just help more than we hurt.

Having to Abort My Very Loved and Wanted Son: the truth behind terminating for medical reasons
I Knew I'd NEVER Get an Abortion, But Life Had Other Plans
A Long Journey to a Full House
advertisement

Having to Abort My Very Loved and Wanted Son: the truth behind terminating for medical reasons
I Knew I'd NEVER Get an Abortion, But Life Had Other Plans
A Long Journey to a Full House