We Need to Take Pictures in the Bad Times Too

Published by Jillian Benfield on November 30, 2017 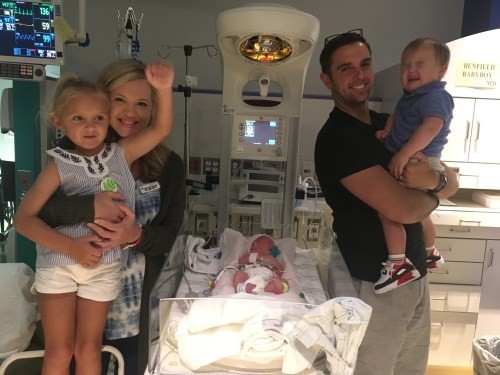 When adding a new baby to the family, parents dream up how our older children will react to seeing their new sibling for the first time. We purchase carefully crafted t-shirts, exclaiming “Big Brother” and “Big Sister.” We can’t wait to snap the first picture as a new family all together. Only this time, after this baby, this wasn’t me.

I relocated to a new city more than a month before baby number three’s due date, because to his prenatal diagnosis of a Lower Urinary Tract Obstruction to be closer to the medical care he would need. At 36 weeks, I ended up developing a liver issue that’s associated with pregnancy and baby Preston made his debut a week later.

The day after my son was born, my mom put our older kids in the car and made the nearly 4-hour drive to come see us, only, I wasn’t sure if I wanted to see them.

After a frustrating morning in the NICU, where my husband realized one of the doctors didn’t perform part of a procedure he was supposed to, I was upset and exhausted, their dad even more so. We felt like we couldn’t leave our new son’s bedside. I didn’t know how I was going to act like myself around our 4 and 2 year old. And I wasn’t sure I wanted them seeing their new brother hooked up to wires and tubes.

But they were waiting for us. The hesitation I had about seeing their happy faces, melted away as we rounded the corner. Our daughter was dressed in little mermaid sunglasses, a bouncing high ponytail and was carrying her new build-a-bear my mom spent too much money on the day before. Our son was having his cousins chase him, while he was still trying to navigate those new PT-approved high-top sneakers I bought him just before leaving home.

I thought seeing their joy, would make me miss them more, or possibly make it harder for them when they realized we weren’t coming home. But instead, I felt infinitely grateful. I felt flooded with that kind of love where it’s so deep that it hurts. How I missed them, but oh how I was thankful they were there, even if they couldn’t stay long.

We walked them into the NICU. My daughter responded age appropriately, “He has tiny feet.” She proceeded to talk about how cute her new brother was before bringing down the nurse’s station with her spunkiness—her acts included asking me why I still had a “bump” and then questioned where babies come from…a inquiry I brilliantly diverted to a willing medical professional.

Anderson reacted just as he should at two. He wanted “uppp” to see the “baybeh”, and was interested for about all of five seconds.

They didn’t have matching outfits. We hadn’t put a single thought into what we ourselves were wearing that day. We forgot about the picture. But we took it anyways.

When life isn’t perfect, take the picture. Because even though an Intensive Care Unit is about as far away as an ideal setting for a first family photo, there are some flawless things inside.

There’s a little girl, full of life, excited to see her new baby brother. A little boy, who is pretty clueless about what this new addition will mean for him, but is happy to be with his parents. A six-pound baby who has no idea what’s going on, but is surpassing the odds that are stacked against him. Then, there are two exhausted, worried, beat-up parents. But for all of those negative emotions those parents feel, they are coming out of a place of love.

When life isn’t perfect, there’s likely something beautiful happening around you. In this picture, I can see the stress on my husband’s face, the feeling of being torn between two places on my own, but the reason there’s so much angst, is because of the enormous amount of love we’ve been blessed with. Even behind the camera is my sister who turned her life inside out to help bring this child into the world and my mother who has sacrificed most of 2017 watching our children to do the same. When the dark times come, love often shines its brightest.

When life takes an unexpected turn, when we feel at our lowest, it’s likely because of the loss or fight for someone we love. We hurt, because we love. Capture it.

How My Children Raise Autism Awareness For Their Brother
The photo I hate and love
'My heart grew, again': 7 things I've learned about welcoming baby number 2
advertisement

How My Children Raise Autism Awareness For Their Brother
The photo I hate and love
'My heart grew, again': 7 things I've learned about welcoming baby number 2