The photo I hate and love

Published by My Dishwashers Possessed-Kathy Radigan on May 13, 2019

The other day as I was going through some old photos, I found a picture of myself, with my daughter and newborn son, from fourteen years ago.

My husband and I had just brought our third child home from the hospital and I was sitting on our bed feeding a very hungry baby.

Just as I settled in to feed Peter, our daughter got home from preschool and seeing me back home ran straight to her bedroom, got one of her dolls and sat right next to me and the baby. She looked up at me and started to feed and burp her baby in the same way I was feeding and burping her brother.

I see this picture and a part of me just melts. I remember the joy I felt bringing home our new son and feeling our family was finally complete.

I remember the thrill of watching Lizzy react to seeing me with Peter and wanting to connect with the two of us. 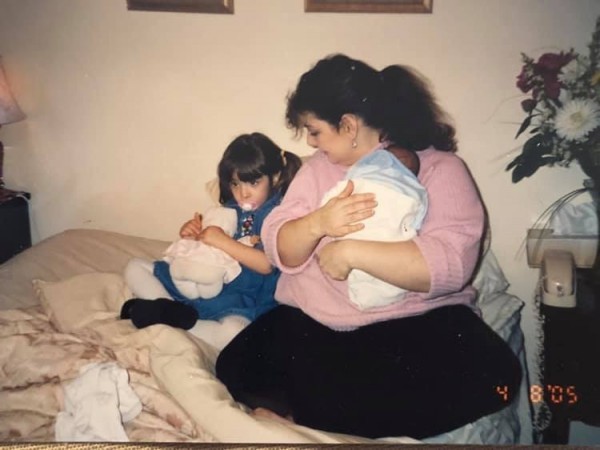 This was huge because even though our daughter was three, she really wasn’t talking. And the preschool she was attending, the one designed for kids who needed extra help, was not nearly enough for her. We were just told a week before that she needed a school with a much more extensive program.

Though we didn’t really need to be told this because it was so obvious that she was much further behind than the other kids in her class.

Yet here she was, totally present and wanting to be with me and her baby brother.

I adore this picture.

I also hate this picture.

I see a me so much heavier than I had ever had been before. Or even thought was possible.

Unfortunately the fifty pounds I put on with my third baby, six months before my 40th birthday, wasn’t all baby. Even though I swore he had to be a 18 pounder. I was crushed when the nurse said he was six pounds. Not even one little extra ounce over.

I see my fat legs and my huge stomach. My hair quickly pulled in a ponytail so I don’t suffocate my newborn in my long curls that badly needed a haircut.

I see our bedroom without a headboard or perfectly placed pillows.

This is not the image of me as a mother that I fantasized about. It doesn’t match the Madison Avenue image of motherhood I grew up seeing in commercials or the ones I see today on social media.

My body is flawed. I’m flawed. My house is flawed.

Part of me, the young idealistic part of me that still remains despite years and years of therapy, wants to throw out this image, tearing it up into tiny pieces. Or at least never letting it see the outside of a drawer. Never mind being crazy enough to post it online and subject myself to the often harsh eyes of social media.

I see the flaws. Every. Single. One.

But I also see my infant son. The sweet, funny boy who is now 14, taller than me, wears braces, loves to play video games and is starting high school next year.

And I see my beautiful daughter, whose speech and developmental needs are very significant. To some extent, the three year old Lizzy in this picture isn’t that far removed from the 17 year old teenager she is today.

Yet she is. She’s done more than most people thought she could. And she is constantly surprising us. Just like she did on this day, fourteen years ago, when she grabbed a doll out of her room, and hopped on my bed so we could feed our babies together.

I’m glad I didn’t throw this one out. Real life is messy, but it’s also stunningly beautiful.

A version of this piece was first published on Kathy’s Facebook page. You can read more about special needs parenting on her site, My Dishwasher’s Possessed!

My Daughter, the Fashion Model
Moms, we're all familiar with 'the guilt market'
My Daughter with Special Needs Wants You to Know She Loves Me
advertisement

My Daughter, the Fashion Model
Moms, we're all familiar with 'the guilt market'
My Daughter with Special Needs Wants You to Know She Loves Me