There is light at the end of the tunnel 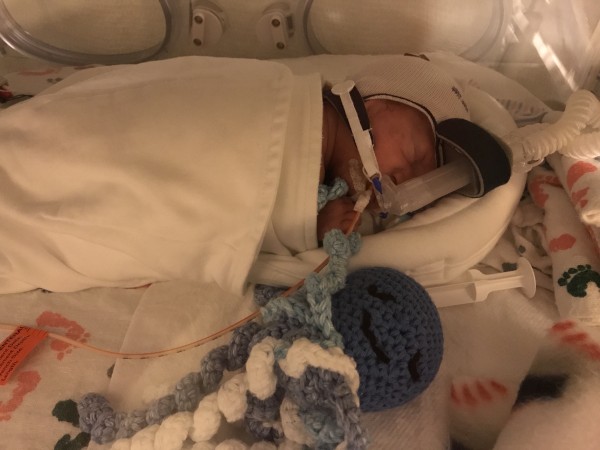 After not feeling my baby move for about 10 hours at 28 weeks and 3 days, I began to get nervous. I called the doctor and went to the hospital for a stress test. I was relieved to hear my little one’s heartbeat. However, not even five minutes later his heart rate dropped into the low 60s and then everything around me changed. My husband left work, they were admitting me, the specialist was called and I was doing everything in my power to stay calm. The doctors were unable to figure out what was the cause of my little one’s dropping heart rate. They found that my amniotic fluid was low and did a test but they couldn’t find where I was leaking from. They mentioned that when the amniotic fluid was low, my little one was able to squeeze his umbilical cord and cause his heart rate to drop. They wanted to keep me in the hospital for at least a few more days in order to allow the steroid shots to take full effect and to increase my baby’s lung development.

After a very eventful and sleepless night in the hospital, the doctor came in early the next morning and made the decision to do a cesarean ASAP. Within ten minutes of receiving this news, I was on the operating table. Our beautiful baby boy had arrived, all 2 pounds, 8 ounces of him! Before I knew it, he was rushed off to the NICU and I was left lying there in my tears, praying that he would survive.

I had no idea what the next steps were going to be but I knew that no matter what, I had to be strong because I was just blessed with a little fighter! I didn’t know it then but he gave me the strength to make it through those long and tiring 85 days in the NICU. I told myself that if this tiny little human can make it through all of the blood tests, tubes, and breathing machines, then I can do anything. Every day was a challenge. When I would walk into his NICU room every day, I was so excited to see him but so nervous as to what update I would hear from the doctors. It was an emotional rollercoaster but it has been so worth it!

When our NICU graduation day finally came, I was more scared than anything. How were we going to make it at home without any machines or alarms? I think for a week straight, I woke up constantly to make sure he was still breathing. I still get up to check on him throughout the night but not as much.

He is now 6 months actual and 3 months adjusted and is doing fantastic! Every day is a miracle and I thank God for every day he gives me with my special little boy.