At 20 weeks we found out that our twins water had already broke and there was not enough amniotic fluid. We were asked if we would like to terminate the pregnancy. We wanted to give them every chance they could have. From there on I was put on bed rest for 2 weeks at home then 2 weeks in the hospital. At 24 weeks 3 day January 10th- Around 4:30 while on hospital rest I started going into labor. I was dilating and having contractions. More medicine was started, Antibiotics, Magnesium and 2 more bags for a blood transfusion.

By 7:15PM both John(Baby A) and Finley(Baby B) were born and immediatly moved to the NICU. They were both put on monitors and breathing support seeing that they both had low fluid for over a month.
1/11/2017 - Early morning- "Code Blue neonatal room 3310 bed 1" It was John. You feel absolutely hopeless. Getting up to the NICU as fast as we could and finding out that he was not breathing and didn't have a heartbeat and more. There was at least 10 nurses in their room. Seeing them doing chest compression's and telling us that he was gone. 5:35AM- John had passed away. We were devastated.
We had a funeral for John on 1/18.
Finley was our little fighter. Against what the doctors thought she was doing great for how little she was. Being able to be on a ventilator while being able to assist and take breaths on her own was amazing!
Day to day she would have her good and bad moments but overall doing great.
Day 9- We found out that Finley had gotten a staff infection. With her being so little and not having much of an immune system the doctors were concerned.
They started her on antibiotics and additional help for her breathing so her body could fight.
Day 10-11 we stayed at the hospital with her.
Day 12- She was doing better. Not great but her stats were higher. That night her body started giving up. The doctors increased everything and told us that we would just have to wait and see.
Day 13 1/23- Morning- We were sleeping in one of the parents rooms when the nurse came to the door to get us. Right after that we heard it again "Code Blue neonatal room 3308" I don't think we have ever moved so fast in our lives. When we got in her room it was the same scene. Nurses everywhere and working on Finley to save her. Around 5am she was gone.
We had a funeral for Finley on 1/27.

Just like that our NICU journey had began and was over. There is nothing on earth that can compare to the loss of a child. Leaving those NICU doors for the last time without our beautiful twins was the most devastating thing we have ever experienced.

Even though we were not able to bring our babies home we are eternally grateful for the care and support the NICU nurses and doctors had given not only to our twins but also to us. 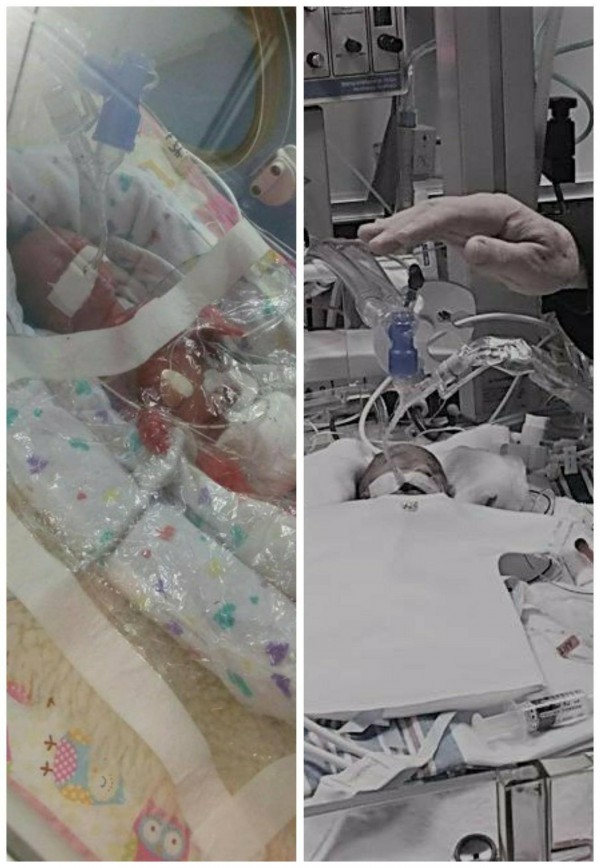 Angels and Miracles!
NICU: Our Premature Twin Girls
Never in my wildest dreams