Throughout my pregnancy my doctors were watching me for Twin to Twin Transfusion Syndrome (TTTS) which is where identical twins share the same placenta and one twin takes all the nutrients from the placenta, which results in that twin having excess fluid and the other twin having none.

During my weekly appointment, the doctor noticed that Baby B's fluid levels had dropped significantly and made the decision to give me the steroid shots to help develop my girls' lungs.. just in case. He wanted me to start coming in twice a week for a biophysical exam. My next appointment date would be just 3 days later on New Year's Day. Since their office was closed, I had to be seen at the hospital L&D triage. The hospital wasn't too thrilled with making an appointment to see me for a semi-routine appointment. Thankfully, my doctor insisted and made sure I was to be seen.

On New Year's Day, I was at 27w5d. At the ultrasound, they discovered that Baby B's fluids were gone so the doctor decided that I would need a C-section that day. The next few minutes were rushed as doctors and nurses came in to get me ready for the c-section. After the room cleared, our nurse was still in the room with us. She was also one of our good friends from church. She hugged us, cried, and prayed with us. As soon as she was done praying, the doctor poked his head in my room and noticed that our baby was in distress and called for an emergency c-section. The next thing I knew I was in the OR. Since it was an emergency, they had to put me under and my husband couldn't be in the room. Within 6 minutes, they had me under and both baby girls out. Annabelle was 2lbs and Magdeline was 1lb15oz. The doctor later told us that he had to peel the sac off of Maggie's skin because there was no fluid left in her sac.

The first few days after were so hard. The NICU nurses told us that those little baby birds in that cage were ours, but since neither my husband nor I were there to experience the birth of our girls, we didn't have that bond. I was also having phantom kicks. It all just felt like a very bad dream. We were finally able to hold our princesses for the first time a week later. That was the moment we became a family!

Our girls are little miracles. We were told that the NICU was a roller coaster ride and that we would have our good days and our bad days. But everyday, the doctors would come in our room during their rounds and tell us how boring our girls were and they had nothing new to report. In the NICU, boring babies are good! Maggie was only on oxygen for one week and then she was breathing room air!! Annabelle was only on oxygen for 3 weeks. At week 2, Annabelle's lung collapsed and she needed a chest tube to drain the air outside of her lung, but that only lasted one day.

The rest of our NICU stay (59 days total) was focused on our girls growing and teaching them how to eat. Of course, lots of kangaroo care. From day 1 they told us that twins never go home together, but on Leap Day 2016, we leaped BOTH of our girls out of the NICU!!

I have a lot of mixed emotions about the NICU. I hate that I didn't get to experience my third trimester, or the birth of our girls, but we also got to meet our girls 3 months early and watch them grow and watch God work right in front of our eyes. We felt like the NICU was a crash course in parenting, too. They got the girls on a schedule and even more importantly, they got us on a schedule. NICU doctors and nurses are angels. They are truly the unsung heroes and we will be bonded for life.

We now have a couple of wild toddlers who are almost 2. They are the best of friends and they are constantly giving each other hugs and holding hands. They have an obsession with Mickey Mouse and we can't wait to take them to meet Mickey at Disneyland next month!

I have never seen God work as much as I have in the lives of our girls. From the moment they were conceived, God had a plan for them. If I didn't have that weekly appointment, if I didn't get those steroid shots, if the hospital wouldn't see me on New Year's Day, if our doctor didn't INSIST on the hospital making the appointment, if our nurse wasn't our friend who was there to pray with us, if the doctor didn't poke his head in right after and see that she was in distress, if the appointment had of been just a couple of hours later, I could have been telling a much different story right now. 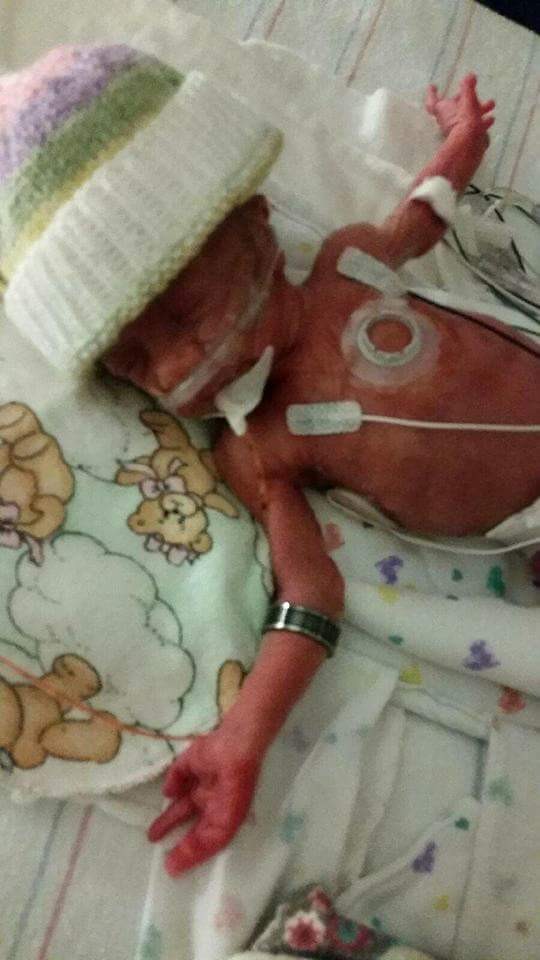 My husband's wedding ring could fit all the way up her arm. 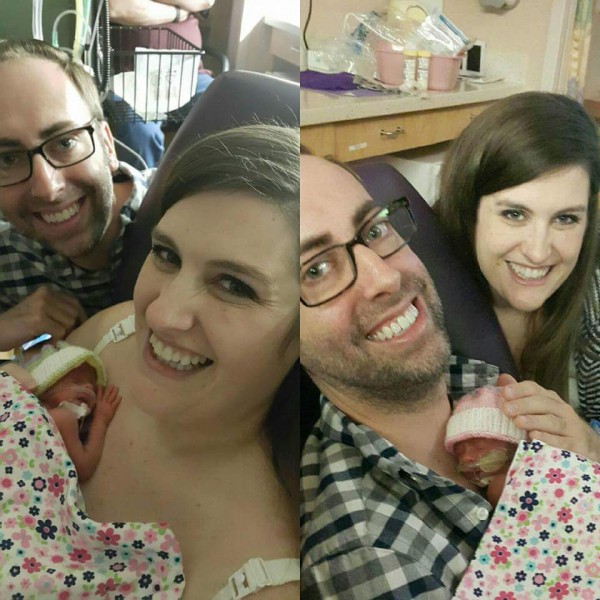 Finally holding our girls after a week! 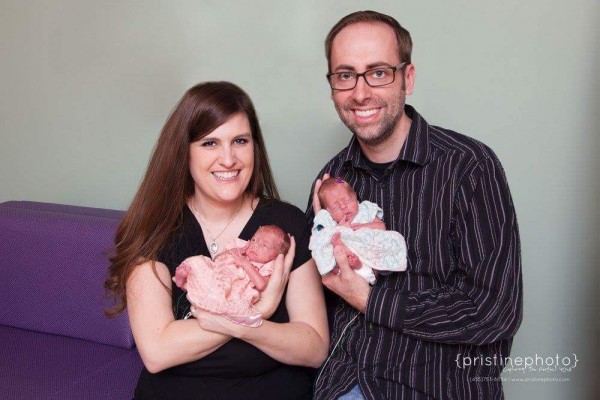 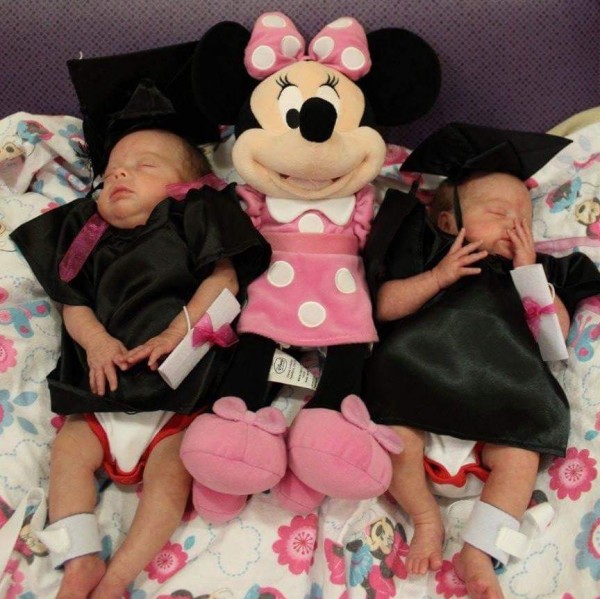 Going home! Both girls came home on the same day!! 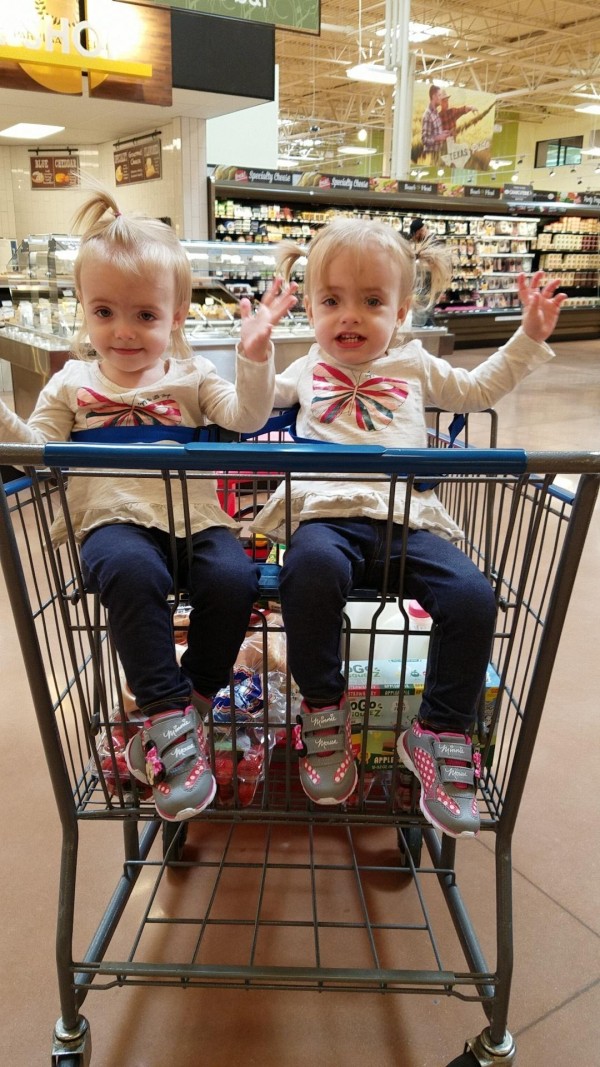