The Untold Journey of Dads to Super Dads

Published by Suzanne Winchester on September 26, 2017

Being a dad is one of the most beautiful emotions; but being a super dad is no less than an achievement. One doesn’t need super powers to be a super dad, for every father plays a role of a super dad on at least one occasion in his lifetime. No matter how big a trouble a man is going through, but when it comes to making his kids happy, he is ready to do anything at the drop of a hat. Like an unwavering and defensive wall, he stands firm to protect his children against all odds. However, sometimes he has to become an uncompromising and unflinching authority in order to instill values and good habits in them. That’s a typical dad for you.

Raising and nurturing kids is not an easy job, especially during the crucial years when dads’ decisions and actions may make or break their kids’ future. There are many important aspects of growing kids that need to be addressed at right instants of time such as play, nutritious food, love, healthy body and healthy brains. Today, when moms are also working and making their contribution to their families as well as nation building; many dads are interchanging their roles in order to bring balance and taking up their children’s responsibilities. 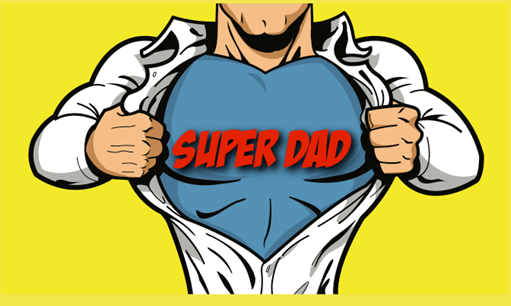 From preparing breakfast to dropping kids to schools to helping them in their homework to even singing lullabies for them, these dads not shying away from doing everything for their kids, which, otherwise traditional dads wouldn’t ever like to do. That’s a new age super dad for you. A super dad, therefore, effortlessly plays the role of a friend, a teacher, a role model and a leader. By endlessly working around, he is a pillar of strength, support and discipline.

How to Become a Super Dad

A good dad is the one who encourages his children, who lets them experience the life it is supposed to be, who rather than being over protective motivates them to do what they want, and inspire them to believe in their dreams.

Here is how a dad becomes a super dad:

Feeling of happiness is contagious. Who else can understand it better than a happy dad himself? Despite being under work pressure and many other social obligations, when a man realizes that his kids look up to him and his state of happiness affects them invariably, then he chooses to be happy for them all the time. Many studies have also shown that children with happy and involved fathers are usually better off. Their peer and sibling relationships are much better and they eventually hold on to stable jobs themselves. This is how a father begins his journey of becoming a super dad.

2- Understands the value of time

Irrespective of a tough schedule and tight working hours, a super dad is able to find quality time for his kids and other family members, which shows he perfectly knows the value of time. As a matter of fact, kids need their dads more than they need their kids because this is the time their foundations need to be strengthened. This is the time when hope and confidence need to be instilled in them for their life ahead. Dads, therefore, need to be aware of what their children are doing and who they are becoming. Many dads today are getting help of time clock apps in order to manage their time properly at workplace as well as at home. In this way they are also passing this habit of effective time management to their kids as well.

3- Becomes a source of strength and inspiration

There are times when kids go through difficult phase. It may be not performing well in academics, or not able to cope up the peer pressure, or being bullied by other kids. This is where a conscious dad plays his role perfectly. He realizes that something is wrong with his kids and tries to solve their predicament by becoming a friend philosopher and guide. By being a super dad right at this instant, he proves to be a source of strength and inspiration for them. This situation is an important ice-breaker for the relationship because a careful handling sets a future healthy relationship between the two.

4- He tells his kids the value of failure

Kids do not have the capacity of handling failure; neither do they have the ability of interpreting it as an opportunity. This is what super dads do for their kids. They know the secret and educate their children to perceive their adversities in meaningful and constructive ways. Super dads succeed in making their kids that failure is not the end, in fact, it is an opportunity to do things differently. It is a great way of learning and self-evaluation.

Suzanne is an independent health care industry analyst & speaker and entrepreneur. She has two children .She has successfully completed many health care events and in-demand as a speaker, regular contributor.