I was 24 weeks and 4 days pregnant with my already miracle baby when I started having terrible pressure. After going all day with this pressure and not knowing what waz going on scared that I was having a miscarriage since I had 2 prior I finally went to the er. When I got there and stood at registration for what felt like a million years someone finally came and got me and took my to labor and delivery where the had me change into a gown for examination. When I went into the restroom to change I started bleeding and instantly started crying because I thought I knew what was coming next. My mom stood outside the bathroom and knew what was wrong when I came out of the bathroom and the look on her face was so sad because she knew also. The. She grabbed my clothes and my panties were damp so the nurse used a strip to test the see if it was urine or if my water broke and instantly change color to show my water broke. Then they moved me to a room and my mom called to tell my husband and dad to get to the hospital asap because we were having a baby tonight. Then the nurses were a little scared because this waz not something they saw very often being that there was no NICU at the hospital I was at so the proceeded to tilt my bed to where I was basically on my head feet in the air until a NICU team came from another hospital. Then when the team got there they did not check me because I had a second water bag the did not break so they didn't want to until my Dr got there to deliver. The NICU doctor basically told me and my family because I was so early there was a good chance the baby would not make it. When everyone waz finally there I waz taken into my first ever surgery which was an emergency c-section so no One could go in with me. I was put to sleep and when I woke up I asked the nurse I recovery if my baby was ok and she answered she didn't know....when i finally got back to my room my mom and dad were there, no baby. They had to transfer him to the other hospital very soon after delivery. My husband and mother I law went with him and my parents stayed. They had pictures of my baby boy but told me the pictures made him look bigger. Later that morning my husband sent me my fist picture of my 1 pound 10 ounce 13 inch long baby boy. I did not get to see him the first 48 hours being we were in separate hospitals and I was recovering from surgery. Those 2 days were terrible...i cried and wondered what I did that made this happen. Then every time I talked to the NICU doctors they never sugar coated anything,they told me the first 48-72 hours were crucial. The day I got out of the hospital we went straight to the NICU and the nurses were amazing and nice and just incredible. He was so tiny in his little incubator and all I could think was this is my baby this is my miracle and he was my everything. The nurses told my when they intubated him the first day he kept rejecting it. Then after about 2 weeks we found out he had brain bleed grade 1 and 2, then we were told all of the outcomes and then we were told by the NICU doctors he was strong and would overcome everything. When we held our baby for the first time it was AMAZING! I cannot describe how great it was to hold my baby that I dreamed about forever. The NICU nurses were so amazing everyone of them,they never rushed us or discouraged us,they seriously became family and meant so much to us. I am still friends on Facebook with one of them and I tell Draven, who is 7 now and 100 pounds and in first grade, that is Anthony and he was awesome with you when you were in the nicu. So thank you to all NICU doctors and nurses, you are amazing strong people. 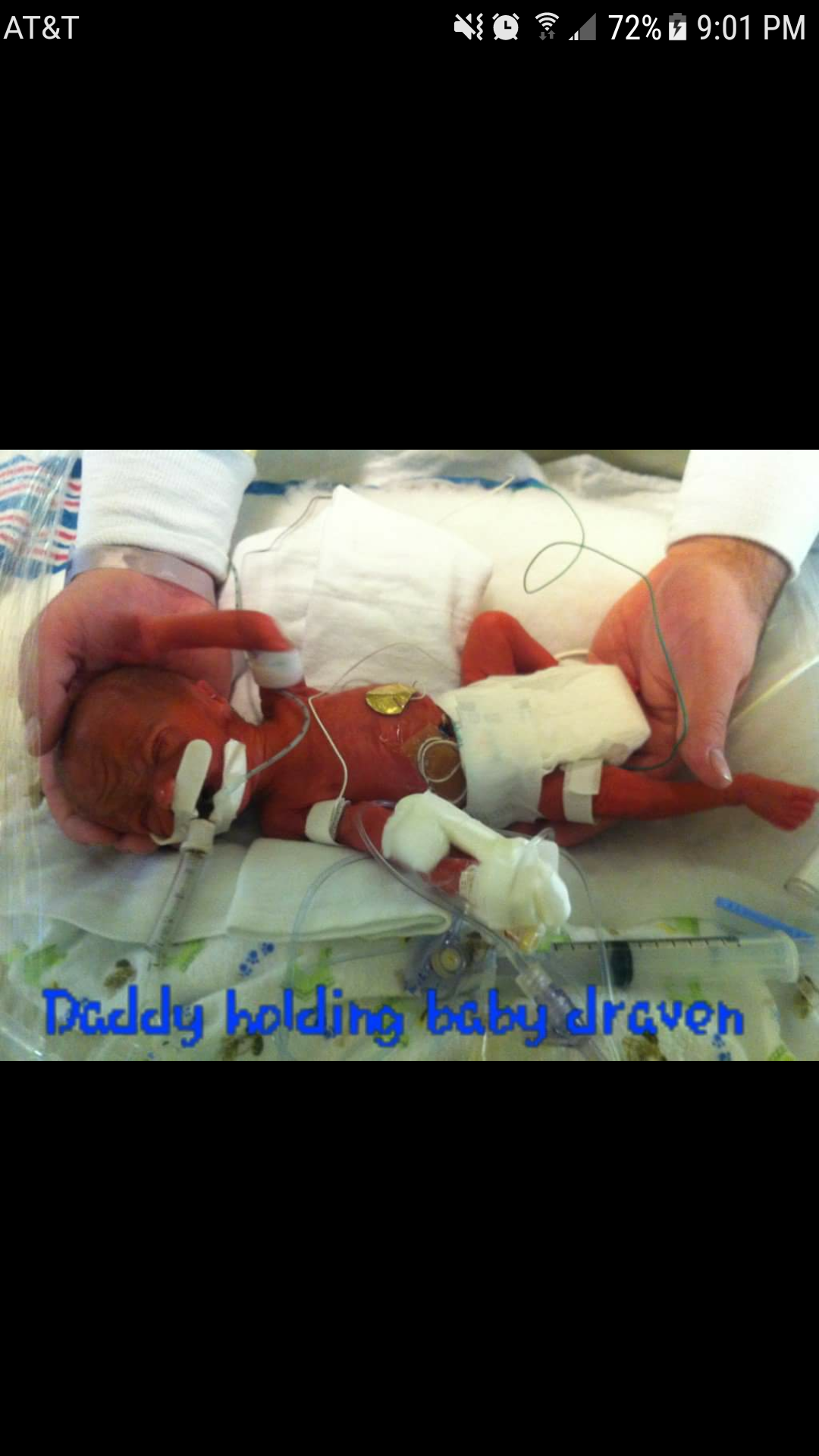 The Day I Finally Felt Like My Baby's Mother
An unplanned way to give birth.
The big kid of the NICU
advertisement

The Day I Finally Felt Like My Baby's Mother
An unplanned way to give birth.
The big kid of the NICU