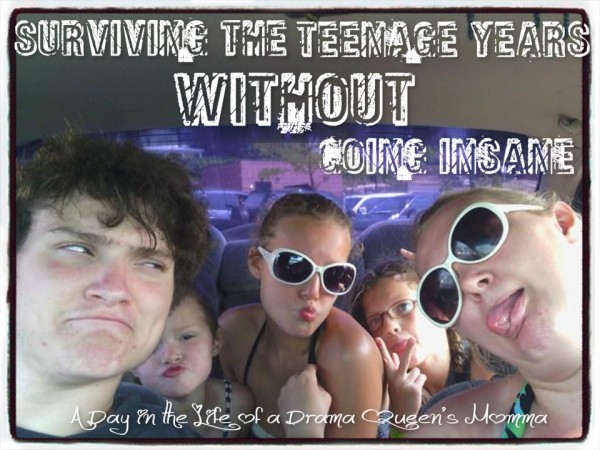 I love being a mom to a teenager.

There... I said it! And it is the truth. You hear so many horror stories about teens, that you most likely inwardly cringe when you start getting closer to those "dreadful" years of parenting.

I know that I did.

But then, my baby boy started to grow up, and he hit those crazy teen years full force, and I realized "Hey! This isn't so bad! IN FACT, you are even a BETTER mom now that he is older!" <---Crazy, but true! Something in me just "clicked" and all of a sudden I could understand WHERE he was coming from. Maybe it is empathy because of my OWN teenage years, or maybe it is because he reminds me so much of myself at that age, or maybe I have just flown the coop mentally and IMAGINED myself as a better mom....whatever it is, I am declaring myself a teen rearing expert.

And because I am now a self-declared teen expert, I have compiled a list of pointers to help get YOU get through the teenage years and maybe even keep some of your sanity in the process!

Seriously! This is the love language of ALL teens. And if you can speak it, they will love you too. And if not, you can at least still get a few zingers in there and feel a little better!

Don't whimp out now! You are raising the next generation of adults! If YOU don't teach them how to wash their own underwear and pick up after themselves, their future spouse will HATE you. AND they will still be bringing home their nasty laundry for YOU to wash when they are 30. Eek! And don't make excuses about how "they can't DO it as well as you so it is easier to just do it yourself"! You aren't doing them any favors by sending them out into the adult world unprepared. TEACH THEM. And if they don't do it right the first (fifty) times, keep showing them until they do! (And by "showing them" I mean ---> make them do it again and again and again until they get it right!)

3. Model the behavior you want to see in them.

We have ALL heard it preached that kids will "do what they see and not what they hear" and this is ESPECIALLY true in teenagers. If they see you being a lazy bum, a cheater, a back-stabber, a liar, a complainer....they will be one too! Ding ding ding. This one should be somewhat self explanatory!

Oooh, a toughie. This one really needs to be started as a smaller child. But it isn't too late if you didn't. Talk to them now. (Not like they are your bestie, because they are NOT. Believe me. Even if you WANT them to be...they aren't!) Teens don't do well in face to face communication. They tend to be SLIGHTLY on the confrontational side. So this one works best if you do something together WHILE conversing. For example: talk while doing the dishes together (two birds, one stone, y'all!), or while driving them to practice or to a friend's house. These are great times to talk about school, relationships, and even that dreaded s-e-x! (I know... It's awkward! But it is better coming from YOU than their completely clueless friend! I mean, have you ever seen "American Pie"??! Jim could be YOUR son. And THAT is way more awkward. Believe that!)

Embarrassing, you wonder?! Yes. Embarrassing. It let's them know that you still hold the cards. So don't push it. And it's fun. We still need to have some fun, right?! I mean, who doesn't get a kick out of singing MC Hammer or Sir Mix-A-Lot at the top of their lungs with the car windows rolled down and their son and his girlfriend in the back seat? I know I DO! But don't be a monster. After all, we ALL have our limits. And if you go a little too overboard (like pulling out naked baby pictures on a first date) you will definitely push them away.

7. Be honest about who YOU are.

Don't hide who you are and where you came from. They aren't stupid. They KNOW that you haven't been a saint your entire life. Come on now. If you made some big mistakes, let them in on it. If you had sex before marriage and feel bad about it, talk to them about your regrets. Trust me, this works WAY better than the "you better not be having sex" speech! If you did drugs or drank before you were of age, use that. These experiences are GREAT learning tools. And when they see that you weren't perfect, they don't feel like they have to hide themselves from you, which plays into the whole "communication" thing above! Double win!

7. Don't be afraid to show your love.

I think this one is the biggest. At least for me. Something about our kids getting bigger makes us feel a little bit "weird" about the hugging and kissing that we USED to give so liberally when they were smaller. Maybe it is the fact that they are no longer DEMANDING it and ACT like they don't want it. But truth is...they do. Maybe not the same lip smacking, raspberry blowing stuff you did when they were small (okay, DEFINITELY not those things!) but they DO still need your affection. And when they ACT like they want to be left alone in their room for hours on end, they don't REALLY want complete solitude. They want YOU to SHOW them that they still are important to you by demanding that they join the family.

I have a couple rules about this at my house. You HAVE to give mom a hug at bedtime. Period. No matter WHAT AGE YOU ARE. At first, my son huffed and puffed about how HORRIBLE that rule was. He tried to give me "knuckles" or the "sideways shoulder bump" or any other thing he could think of. But I wasn't going to back down. A real hug. Period. And guess what...now, at 15, I get one EVERY night without even asking. And I also demand that when I say "I love you" I get one back. Even if you are with your buddies. (I know, I am seriously cruel! Please refer back to "embarrassing" rule above.) No exceptions.

So there it is. Teenagers aren't that bad. Really. I swear! With just a little adjustment in YOUR thinking, you CAN do it! And remain sane too!

...Or maybe I just have it easy because my first teenager is a laid-back boy...

If that IS the case, I am in serious trouble with the three girls coming up in the wings! I will get back to you in a year when my oldest daughter is OFFICIALLY a teenager.

I am a mom of 4, 3 girls. I live in drama up to my eyeballs daily. I write to find my sanity. Or escape from reality. Same difference, right?