Published by Catherine Coulson on April 29, 2018

I am a Speech Pathologist who works with preschoolers and elementary aged students (I'm also planning to share my progress on my blog). One of my students who has a diagnosis of Autism has difficulty recognizing the faces of his peers. When he brought home his class picture, his mom asked him to tell her who the people in the picture were. He told her he didn’t know their names. Since it was March and more than half the school year was over, his mom was very surprised that he did not know the names of his classmates. Disappointed, she spoke to his classroom teacher the next day and informed the teacher of this problem.

The teacher was also surprised to learn this since the teacher had engaged in many ice breaker activities at the beginning of the year to help the students become familiar with each other and is always calling the students by their first names. During the year the teacher has also arranged several opportunities for partner work, rotating partners on a regular basis so that all the students had a chance to work with everyone else in the class. The teacher and parent then presented this problem to me and asked for my assistance. I explained that it is not unusual for autistic children to not know the names of their peers, despite the teacher’s efforts, because autistic children do not know what distinctive features to focus on when looking at people.

At our next Speech Session, I showed him the class picture and asked him to point to a child that I named who I have seen him play with. He told me that he could not find his friend in the picture because they all look the same to him. I asked him if he could close his eyes and picture what his friend looked like in his mind. He said he couldn’t. Then I asked him if he knew what color hair and eyes his friend had and again he did not know. I remembered that he frequently confused two other teachers with me, calling them by my name. Now that I thought about it I realized that he grouped us all together because we are all short in stature and that instead of focusing on our faces when he saw us, he was focusing on our size. This was part of the same problem that his mom and parent were describing.

Then I began an intervention program for face recognition. I explained to him that we can tell people apart because people have different features that make them look different. These features include hair, eye and skin color, hairstyle (long, short, curly, straight), size (tall, short), etc. We studied pictures of each feature and labeled them. Then we practiced drawing pictures of people with different colored hair, eyes, skin and different hairstyles. He looked in the mirror and labeled his own hair and eye color and hairstyle. Once he learned to focus on different distinctive features that make a person who they are, we looked closely at individual pictures of family members and I asked him to describe the distinctive features that they had as he wrote who they were under the individual pictures. When then did the same with individual pictures of his classmates only this time I supplied the name of the classmate and wrote it on the picture while he talked about the distinctive features that person had. Another distinctive features we discussed was who wore glasses. We did activities like sorting boys and girls, sorting classmates according to one distinctive feature such as everyone with brown hair, everyone with short hair, everyone with curly hair, etc. We talked about what feature really stands out for certain classmates and what we can remember about that person to help us associate that person’s name with the picture of that person in our mind. Some other features included “muscular and athletic”, “acts funny – makes class laugh”, “has a high/low/loud/quiet voice”, etc. We also played the commercial game, “Guess Who”.

After intensive instruction in distinctive features, he was able to look at the class picture and name all the classmates. Now when he meets someone new, he knows to look for these distinctive features on new person and try to find a feature to associate with that person’s name. 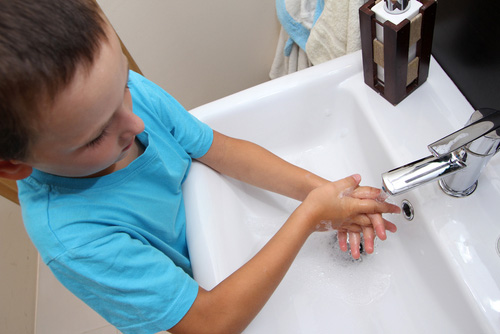 My name is Catherine. I worked as a make-up artist. Now I'm a mother of a Ian - he's 4-years old, and he is an autist. Now I'm working as a teacher in a learning center for autistic children.