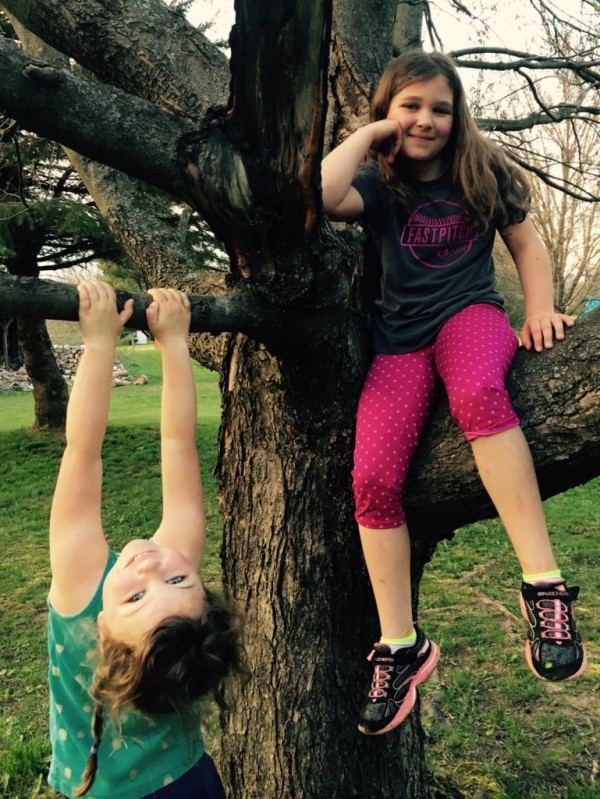 "Mommy! Look!" my daughter Gabby, six, is yelling at me from the backseat.

"Honey, I'm driving," I tell her. "I will look in a sec." I think about also explaining that she doesn't need to yell, since the space between her mouth and the back of my head is at max, eight inches, but math isn't her forte yet and I haven't had enough coffee to engage that much.

"MOMMY MOMMY MOMMY MOMMY. LOOK." All sorts of things that she could want me to see run through my head, a ticker tape of possible horrors. She's puked. She's peed. She's pooped. She's blown her nose down her shirt. She's opened the window and thrown her pants/shirt/little brother out it.

We reach a stop sign--thank God--and I turn around enough in my seat to see that it's none of those things. It's her belly. She's holding up her shirt, pointing. "Look at my belly! Isn't it great?"

Grinning, I turn back around and drive on. "It sure is, baby. It sure is. Don't wipe your nose on your shirt."

Gabby loves her body. Like, REALLY loves it, the kind of loving that all the self-help gurus and yoga teachers and body image experts keep trying to teach the rest of us. She runs around, belly out, excited with the sheer joy of being able to move and dance and flop and jump in her body. I don't know where this came from, but I know enough to know it didn't come from me. I've spent more years than she has been on this earth trying in vain to walk the line between doing enough yoga to find enlightenment and doing enough stomach crunches to be able to zip up my jeans. I long ago gave up on the idea of loving this body and settled for the more reasonable goal of making peace with it, and even that feels out of reach more days than I care to admit.

Maybe she learned it from her older sister Maria, whose confidence is not as in-your-face as Gabby's but instead strong and silent, enough to be the only girl on her little league team and hold court with boys twice her size. I couldn't care any less about baseball--watching it is like watching paint dry but with more spitting and groin adjusting--but I could watch Maria on the field all day long, her curls hanging down her back, long enough now to cover half of the number five on her jersey.

Except I haven't had to teach them any of these things, not once, not yet. They came out of me and inherently loved their bodies and perhaps even more amazingly: they loved MINE, especially in the soft places that I still struggle to own. They came out instinctively wanting to move and fought to learn how and still haven't stopped, and I know they're not doing it so they can justify that second scoop of ice cream because to them that ice cream is just that: ice cream. It isn't love and naughtiness and wounds and numbness and something they will have Catholic guilt over eating long after the taste has faded from their mouths. They eat when they are hungry and they stop when they are full and if I told them what the patriarchy was and how hard they might have to work to achieve their dreams just because they have vaginas they would look all confused and narrow-eyed at me to see if I was joking because there isn’t any room for that nonsense in their hearts.

So I've been trying to amend my best laid raising-girl plans. Maybe my goal here isn't to teach them those things at all, but rather to help them hold as tight as they can to what they came out naturally knowing. Maybe my job is to soften the blows of the universe and keep these girlies alive and eager and from closing up tight around their wounds like I did, like so many of us did, getting bitter and hard where we used to be wide-eyed and soft.

And that would be lovely, if I had a clue how to do it. But I'm just winging it, I realized, when I went to tuck Maria into bed the other night and she was crying. "What's wrong, baby?" I asked her, the ticker tape of tragedy again flying through my head. She was teased, she was bullied, she hated her teacher, her friends, her hair. She was in love, or out of love, or god forbid: pre-menstrual.

But it wasn't any of that either. It was bigger than that. "Everything's changing," she said simply, and she looked three decades older when she said it. She looked like me. This was my chance! I got excited. I got preachy. I had so much to say and so much to teach and I tried until it all got stuck trying to fall out of my mouth at the same time and I fell quiet, and she was quiet, and we sat that way for a long time until the space between us started to feel holy and like there was more gospel in our simple being than there ever could be in the lessons I struggled to spew forth.

Eventually her breathing slowed and her face softened back into youth and I knew she was asleep. When I stood I tucked the sheets around her body and the curl back behind her ear, and leaned in close, right next to her ear. "Fight the patriarchy," I whispered. I couldn't help it.

Her eyes stayed closed, but I swear I saw her raise her fist under the covers.