We Have to Dance Even When the World is Shit 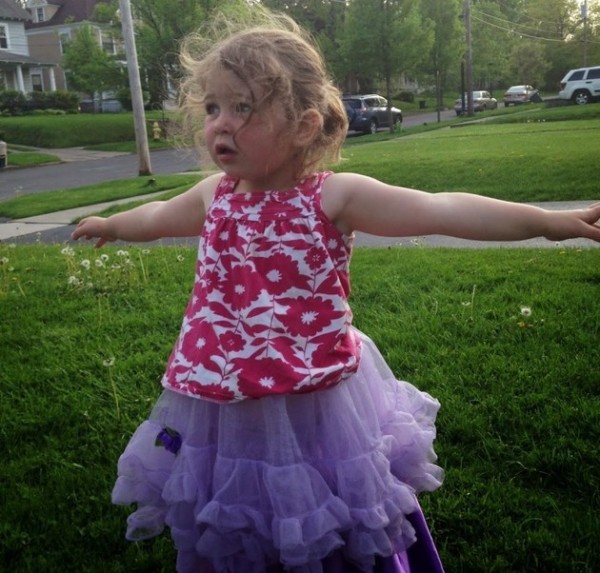 Times like this I worry. I worry about you guys and about myself too: the feelers of the world, the people who take this shit news storm (people and children dying senselessly, another singer is lost before his time, Trump is still president, men are wearing rompers) and internalize it until out of self defense and the need to keep doing laundry we become these desensitized zombie versions of ourselves, stepping languidly through the fogs of our lives but not feeling much of it at all lest we crumble into piles of ash in the middle of the cereal aisle.

Maria was eight years old when my mother died, and when I told her she took the news on the chin as she does with everything, the only clue that she was affected an almost imperceptible droop in her shoulders as the words settled in. She stayed next to me though, sitting with me on the front steps in the showoff-y splendor of the September sunshine.

Together we watched Gabby, then three, dance in front of us, twirling circles in the lawn. "Mommy," Maria asked, leaning into me enough that that her loose curls brushed into my lap, “if Nona is dead, is it okay for Gabby to keep dancing?”

The question has stayed with me a long time, through the aftermath of the death sure, but after that too. It's not the answer to the question that I struggled with either, the assurance that it was okay--necessary even--spilled out of my mouth so quickly and with such force that one of her curls lifted in the breeze of my breath.

No, what I have turned over and over again in my head since then is the why. With all this misery in the world, why would anyone dance, ever?

Because there is just so much, isn't there? The Buddha said that life is suffering and anyone who has lived a life at all can attest to that: we lose so much in a lifetime that it's borderline cruel.

There's the loss we're feeling right now of faith in our leaders and the free world and the ability to believe in pillar principles of sanity like freedom and justice for all.

There's the loss of these artists, one after another, the people we grew up watching make songs and movies and art that tapped into the things we felt alone in and made us realize that while pain is individual, this suffering is universal.

And of course, there's that big loss we are all pretending ain't coming by losing ourselves in our bottles or our phones or our churches or our beds: the great cosmic irony that to have been given this gift of life at all is also to know you will, someday, lose it too.

You'd have to be ignorant, one could argue, or even insensitive, to dance in the face of such things.

This is precisely why we must dance, and I don't mean in spite of the suffering, either. We have to dance ourselves THROUGH the suffering. We have to court that shit, get up close to it, extend a hand and make a dance partner out of it, twirling it around in the front lawn until we are both so dizzy that we can't tell anymore where the suffering ends and where the joy begins.

Because there's a big truth and beauty in this life of suffering. And that is this:

Suffering and joy are borne of the same things. Without love, there would be no loss. Without joy, no pain. Without the greatness of their art, we would have no artists to mourn. Without a country and a people we so deeply love, we would have nothing and no one to feel drawn to protect. To miss. To mourn. To lose.

There are many things I wish I had done differently in the aftermath of my mothers death, but not the least among them is this: I wish so hard that I had just grabbed Maria's hand and pulled her down from those steps and onto the grassy dance floor. I wish I had danced, even if it took me a while to find my rhythm. Even if what came out looked more like a convulsion at first than a celebration. Because eventually I think the three of us together could have made something quite beautiful out of that pain.

And I think my mother would have liked that very much.