Play in the Sandbox: why our kids need to be in school, this year more than ever. 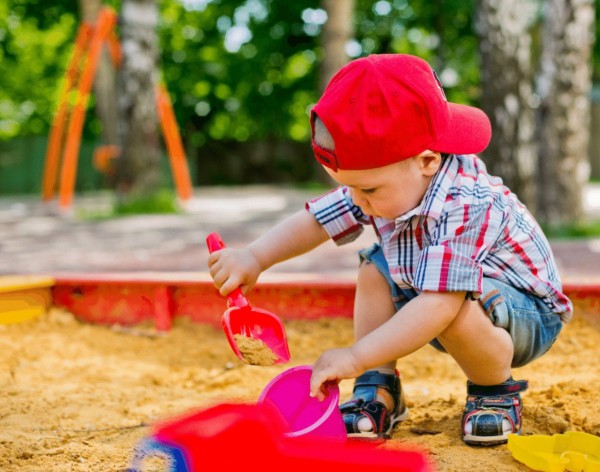 One day in first grade, my son took a football in his backpack so he could toss it around with his friends after school. At the end of the school day, the elementary kids would run wild on the playground, released from the confines of the classroom where they had tried, with varying degrees of success, to keep their energy in check all day.

This particular day, my son and his friends began tossing the football on the playground while I watched. An older fifth grader came up to him with a ratty, deflated football and a cocky mouth full of proposals. I could tell he was offering my son his football in exchange for my son’s smooth, brown, new football. My son looked up at the fifth grader, eyes dark and wide, cheeks still chubby in that first grade way, and shook his head. No deal.

Ten minutes later, the fifth grader came back to my son, but this time with three friends in tow. The four fifth graders surrounded my son in a mildly threatening way. In a we-are-10-inches-taller-than-you way. And, once again, they made their request.

This time, my son reluctantly made the trade. He watched his new football being tossed by the big men on campus, and he started throwing the ratty football with his friends until it was time for him to retrieve his ball for us to walk home.

Never having been a boy, I got home and relayed the story to my husband, wondering if my son should’ve stood his ground the second time. He laughed and said our son did the right thing. “He stood up when it was one guy, but when the one guy comes back with friends, you gotta give up your ball. He got his football back at the end, and that’s what matters.”

Last year, that same child was himself a cocky 8th grader, top of the middle school, big man on campus. He and his friends were playing a card game on the bleachers at a field near his school. Some high schoolers were tossing a football on the field and one of them motioned for my son and his friends to join them.

The 8th graders walked out to the field, excited to be included. When they got halfway there, the older boys said, “Nah, we were just kidding,” and laughed. My son and his friends did the walk of shame back to the bleachers, laughing with embarrassment.

I talk to kids every day at home and work, and I’m here to tell you the rules of the sandbox are legit. A senior this year told me that it’s a tradition to point a lost-looking, map-carrying freshman in the wrong way if he asks for directions. That’s a classic sandbox prank, which has likely been around since my dad was in high school in the 1950s.

There’s only one way for our kids to learn the rules of the sandbox: they have to get in the sandbox, and we have to let them.

When children are 18 months old and need a diaper change, they learn that sometimes they have to sit on the “waiting bench” because another friend is there first. When they are two, they learn not to bite someone who takes their toy and makes them angry. When they are seven, they learn how to handle it when their best friend refuses to play with them at recess.

They learn how to deal with kids and teachers of every ethnicity, race, religion, cultural background, and socioeconomic status. They learn their multiplication facts and history dates. But they learn so much more in the process of living in a school, which is a little microcosm of the broader world.

This year my kids are in 12th, 9th and 6th grade, so two of them are starting at new schools. The 12th grader gets to walk in confidence with all she’s learned so far, but the other two have a big learning curve coming in the next few weeks, which will be cringeworthy at times. As hard as it is as a parent, I just need to let them play in the sandbox, messy as it is, and learn what they need to learn.