Published by Run.Knit.Love on September 8, 2015 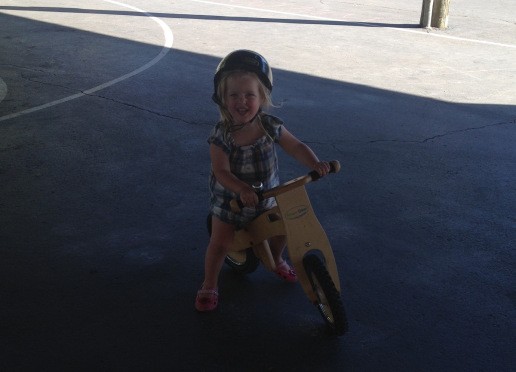 Last weekend my family and I were all playing together at a playground two blocks from our house. It has a large blacktop which is perfect for our kids’ burgeoning biking and strider-ing skills. They happily played on their bikes and on the play structure. Then the baby started getting sleepy and it was time to pack it up and head home.

“Time to go” is a loaded phrase in these parts. More than half the time it’s met with an “Aw man, okay.” Every once in a while, we get everyone in the magical moment of all feeling ready to leave at the same time. Last weekend was not one of those times. Last weekend fell squarely into the remaining ten percent or so of times when you question the wisdom of ever leaving the house again.

I mentioned above, but it bears repeating – we live two blocks from this playground. We can see it from one of the upstairs bedrooms. It is not far. It’s the equivalent of maybe two rounds around the blacktop, which my daughter had done approximately 64 times in the past hour. The remainder of the journey, however, was proving too much for her.

“I don’t want to ride my strider home.” She declared, calmly at first.

“That’s fine, you can walk it home.” I explained, also calmly.

“I don’t want to walk it home!” She was escalating quickly. “I need someone to help me!”

With three kids, we have to have some hard rules. One of our hard rules is that if you bring something out, you are in charge of bringing it home. There just aren’t enough arms and hands for the parent to bring everything back. We have also learned from experience that with our strong-willed daughter, it is important to set firm limits. My husband reminded her of the rule. As you can imagine, the reminder did not go over well.

“You can leave it here,” I said, “but someone might take it. We might not see it again. So your options are to ride it home, walk it home, or leave it here and maybe lose it. It’s your decision.”

At this point the baby was past nap time and starting to scream. Our oldest son was already waiting for us at the end of the block. We couldn’t keep hashing over it. We started to walk. My daughter continued to scream. And I mean scream. She was tired and she was pissed. And she was making that known to everyone within a two-block radius. She was also lagging behind us about 50 yards, slowly walking her strider while screaming her displeasure.

My husband moved ahead to get our oldest son home while I stopped to wait with the baby so she could catch up a bit. A man was loading something into his car, and stopped to look, alarmed at the sounds of my daughter. “It’s okay,” I said, embarrassed at what he must be thinking. “She’s my daughter.”

I could imagine what he must be thinking, because I was doubting myself too. “Why can’t she control her kid?” Why won’t she help her?” I did have a baby strapped to my chest, but my hands were free. I could do it if I really needed to. But I had to hold firm, because if I helped her “this one time,” it most certainly would not be this one time. And, despite her screaming, I also know that she really needs me to stick to what I say. It can be even more disruptive for her when I don't.

I cringed, waited for his comment. “Been there!” he said with a laugh, and got into his car.

“Oh okay!” he said. “I didn’t see you! Just wanted to make sure she didn’t need help.” And he went back to his gardening.

It can be incredibly awkward as a parent when you are doing what you know is best for your child when, outwardly, it may not look that way. It is easy to feel judged. It is also easy to assign these emotions to others, even if they are not actually feeling that way.

Another time, not long ago, my son ran ahead around the corner. I was walking with a friend, and her young son became concerned. “Where did he go? I can’t see him!” “It’s okay,” I said. “He knows not to cross the street on his own. When we turn the corner, you will see him.” Except we didn’t. He had crossed the street on his own – something he had never done before. A car was idling at the corner. The woman inside rolled down the window. I was so scared and angry and embarrassed. I called him by his full name – middle and all – something I had never done before. “It’s okay!” I yelled to her. “He’s my son.” She drove away as he started sobbing – scared about what he had done and at the fear in my voice.

I told my friend about it afterwards. I told her about how raw and tangled my emotions had been. How I was at first so scared, and then so embarrassed. “I can’t even imagine what she must have been thinking.”

“One time,” she told me, “my son was having a hard day. He ran to the end of that exact same street, and a mom stopped and checked in with him and drove away. I didn’t think she was judging. I actually thought it was a really nice community moment – that this woman checked in with him to make sure he was okay.” The funny thing was, that woman was me. And she was right – I wasn’t judging. I saw my friend's son looking upset and just wanted to make sure she was nearby.

I took a social psychology course in college. Our teacher was explaining altruism, and saying how some people believe that there are no true altruistic acts. This didn’t seem right to me. “What about a stranger who saves someone from drowning?” The teacher gave a few reasons for why that might not be altruistic – to alleviate potential guilt; to feel like a hero. I gave a few more examples, and she provided ulterior motives to all of them. Finally I said “Well, just because there are potential ulterior motivations, that doesn’t necessarily mean that’s what the person was actually feeling.” “Exactly,” she said.

That’s how judgment works too. You can assign ulterior motives to everyone along the way. You can imagine that the world is judging you for your children’s behavior, for your parenting. But a lot of the time, that’s not what they’re feeling. They’re just being good neighbors or good community members, checking in to make sure you are okay.

My daughter was still screaming. I took a few steps toward her and met her halfway. I got down on my knee and gave her a hug. “I know you’re feeling so frustrated. But I also know that you are a strong girl, and that you can do this. I will stay with you the rest of the way home.” We walked to the end of the street, crossed, and she rode her strider the rest of the way. “I’m proud of you.” I told her. “You didn’t feel like you could do it, but you did. That was hard work. You are a strong girl.”

And I meant it. No judgment.