My fourth c-section was the easiest AND hardest

*NOTE: This is my personal experience. Cesarean deliveries are major surgeries. Each pregnancy is unique and it is between you and your doctor whether one or multiple surgeries are preformed. 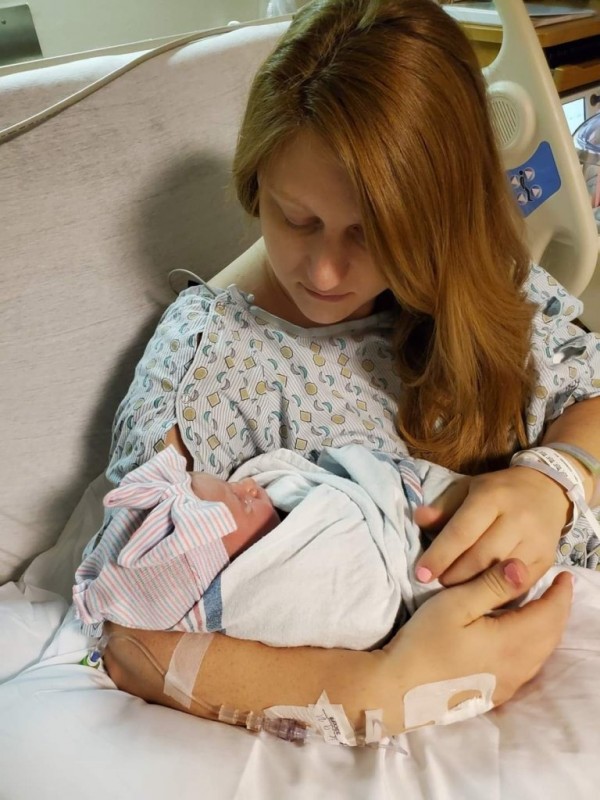 We knew from the beginning of this pregnancy that it would be a cesarean delivery. My first had been an emergency surgery, after a 30-some-hour labor that resulted in a barely dilated cervix and a “stuck” baby. Cesareans for any future babies, would now be expected.

Our fourth delivery was earlier than the others. It was decided by my OB and an MFM (Maternal Fetal Medicine) specialist that baby girl should arrive at 38 weeks. A couple months prior, I had been diagnosed with gestational diabetes. Even though I had both drastically changed my diet and become insulin-dependant, my blood-sugar refused to go down and then an ultrasound revealed a potentially problematic fluid level and an inflated belly on baby.

Despite a physically stressful pregnancy, my husband and I were feeling the most prepared and optimistic we’ve ever been. I guess when it’s your fourth baby, it all starts feeling like business as usual. We were readily stocked with diapers, formula, and baby gear months ahead of time. The weeks leading up to the big day, for me, were spent nesting – which was more about preparing my three other kids, husband, and kitchen than a new nursery. I knew that recovery from a c-section would be no walk in the park. I needed to make sure my older kiddos knew what to expect and that my kitchen was well-stocked so hubs could take over the cooking for a while.

My husband also nested in his own way. He set his focus on thinking of all the things I didn’t think of. He proudly ordered more clothes and baby gear in droves. He knew I needed him and the kids to be OK. He just needed me to be OK. He ordered so much so often that it’s probably safe to brag that he single-handedly kept a bunch of Amazon drivers employed these past few months.

My surgery was scheduled for the day after my oldest son’s 9th birthday. He swore it sounded cool to him, but I was determined to make sure his birthday wouldn’t be overshadowed by the baby. I knew it was probably my irrational hormones doing the thinking for me – but I just couldn’t shake the feeling that the closeness in birthdays would inevitably cause my son to resent his baby sister; if not now, then some day.

The week before his birthday, I planned an elaborate surprise for him after school. I turned our entire kitchen into the Upside Down and we had an early Stranger Things themed party. I don’t regret it for one second, though I’m sure he’d have been fine without and my back probably would have thanked me for not spending hours hanging Christmas lights. 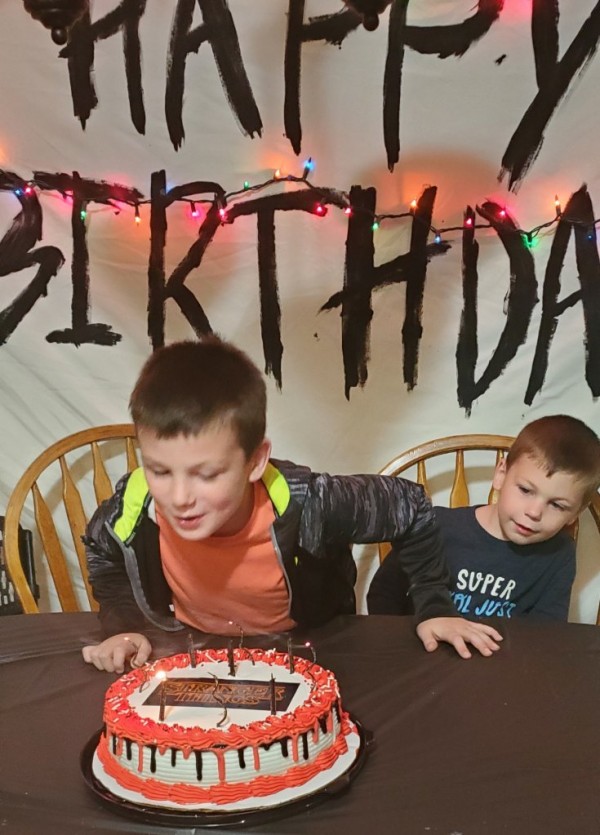 Hardest part about having my fourth c-section: hands down, the guilt I feel in regard to my family.

You see, as I said, I KNOW it’s probably my irrational hormones in the driver seat here – but I can’t help but feel that good ol’ maternal instinct. That lovingly nagging feeling that shouts at me: “GET UP AND TAKE CARE OF YOUR KIDS!”

…no matter how sore I am or how burnt out I feel.

I can’t help but have similar feelings toward my husband. Sure, he’s been a huge help since baby girl’s birth – but, picking up my slack also means he’s been putting his stuff on the back burner. Hey, it’s life, and he will swear up and down it’s all good, and then fiercely defend his position that he’d never have it any other way. I am filled with gratitude, but still plagued by immence guilt. I want to help. I want to do my normal day. My body just isn’t as ready as I am.

Recovery time from a c-section varies from person to person. It can take anywhere from two to six weeks to start feeling like you again…even when actual physical pain isn’t so bad anymore.

This was my fourth – so, naturally, I was prepared for extra discomfort this time around. I’ve never forgotten the simultaneous aching and burning that is incision pain. I had assumed that misery would be back, times ten, once my scar tissue was cut through yet again.

Don’t get me wrong – that pain was totally back. Times ten, just as I feared. But, funny thing – recovery felt easier than ever. How the hell is that even possible?

Well…easiest part about my fourth c-section: managing my pain.

I’m not trying to sugarcoat recovery from a major surgery. It absolutely hurt like a mother! My abdomen ached and it burned and with every sneeze, I was certain my uterus was going to fall out. But, if I’ve learned anything over the years about having surgery, it’s these three things:

So simple, yet these little tid-bits have literally taken me 10 years to fully accept.

The medication you get in the hospital will probably constipate you even more than you already are. But being able to pick up my baby without myself crying is way more of a win, the way I see it. I have learned that it is OK to accept that I’m not OK, and just take the medicine.

Walking for the first time after a cesarean is for sure one of the suckiest days of recovery. But the more you put off moving your body, the longer it’ll actually take you to heal. Bonus – it relieves gas pain and helps the constipation.

Asking for help is the single most important piece of advice I could ever give anyone. As a mom, I always used to have the mindset of, “nope, I’m the mom. I can do it,” when in reality – I couldn’t do it. True, I have a helpful partner. But, he isn’t a mind-reader and neither are my friends or family. I’m feeling better this week, but I ask my oldest to carry the laundry baskets. I ask my mom to help me reach the high shelves. I let my hubs know when I haven’t slept enough. 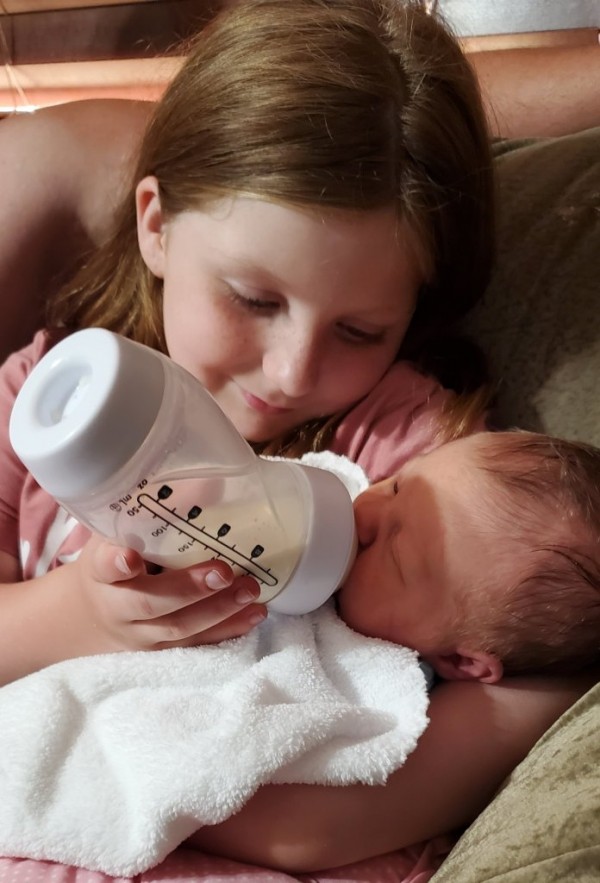 I’m proud to say we are making it through this recovery way smoother than I had imagined. I, obviously, still have moments when the tenderness of my belly makes it too much for me to stand for long periods of time or climb stairs. My husband and kids have their moments too – where they feel the exhaustion from taking on extra chores. But, as we make our way through the transition to a family of six, I see each of us adopting new, helpful and thoughtful behaviors, which make me even prouder. 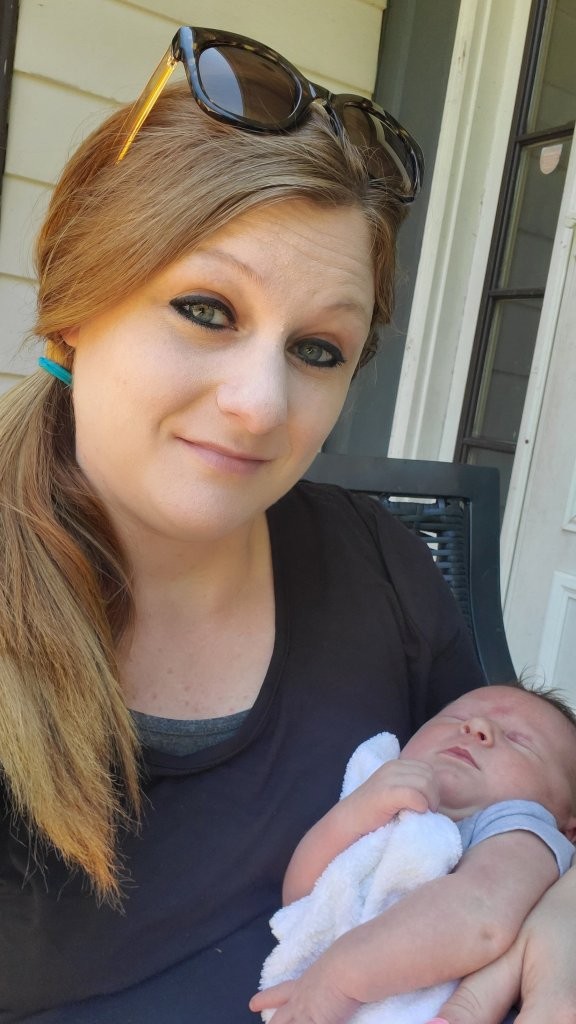 Though it has been advised by my doctor to not do this again (and, yes, we are taking that advice!), we are totally rocking this recovery as a family. This is unquestionably the easiest AND hardest c-section story I have.

Don't tell me how to feel about my birth story!
My Birth Story
His name was Lochlan Michael, he was born November 20th 2015.
advertisement

Don't tell me how to feel about my birth story!
My Birth Story
His name was Lochlan Michael, he was born November 20th 2015.