Don't tell me how to feel about my birth story!

Pretty recently, I was lucky enough to be interviewed for two separate articles written for today.com. Both featured women who have been through cesarean deliveries – their stories, outcomes, and their feelings.

One article highlighted the stigma sometimes associated with such deliveries and the other focused on recovery stories.

April is C-Section Awareness Month. Over 30% of all births in the US are cesarean. That’s a pretty large number! While there are various reasons for a surgical delivery, and, no two mamas are exactly alike, the internet is still chock-full of know-it-all trolls who insist their opinion is the only correct one.

When both of these articles made their debuts on social media channels, I was surprised, and honestly, a little let down by many responses from readers. Don’t get me wrong, there was tons of praise and women dropping by just to say, “hey, thanks for sharing your experience!” And, to those people, I am grateful. But, many other women felt…different. 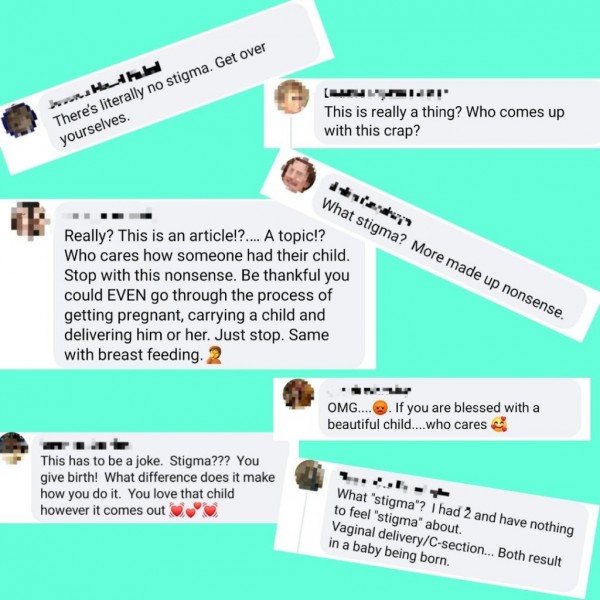 Listen – I am NO stranger to a little internet-roasting. I own a personal blog and I’ve had articles published by the likes of TODAY Parents and Scary Mommy. When I write an article, I am prepared for both love and hate. I can’t be EVERYONE’S cup of tea, and that’s totally okay!

When diving into the world of media, you have to develop a thicker skin, relatively fast. But, one thing I just CAN’T get on board with is women shaming other women. ESPECIALLY when it comes to our birth experiences.

Every experience may not be life or death. TONS are beautiful and joyful. TONS are also scary and full of uncertainty. But, EVERY experience is unique and YOUR OWN. And – for other women to say things like, “get over yourself,” or, “who comes up with this crap?” Ugh! It’s not just shaming. It’s shameful.

Assuming that because your journey was easy, everyone else’s couldn’t possibly be much harder…

You had surgery, but recovery was great for you, so the rest of us must be full of it…

Don’t you dare tell me how to feel about MY birth experience.

Labor began around 2:00am on June 7, and lasted 30 hours, total, before an emergency c-section was performed.

My water had broke while I was asleep, and steady contractions followed. Everything seemed pretty normal at the beginning. I excitedly called my parents. We grabbed our bags, which had been readily packed for weeks. We drove at a leisurely pace, because contractions weren’t incredibly close and the nurse on the phone said it was okay to take our time.

When we arrived at the hospital, the first nurses weren’t sure I was actually in labor yet. They couldn’t believe I hadn’t worn an incontinence pad on our drive over. They said I should’ve been leaking still if my water had really broke. I remember telling them I was almost positive I didn’t pee in my bed, and the contractions hurt like a mother, so they needed to get in there and investigate.

Apparently, it’s possible for your water to break, but get kind of blocked up. Once they had me pantless and in a gown, a nurse gave me a quick physical exam, and POP! – she “broke the bag” the rest of the way, and fluid gushed out of me so fast that I was able to hear it splash on the floor (like the sound of a water balloon hitting a hard surface).

From that point on, it became a grueling waiting game. My contractions started out consistent, but the strength soon began to taper. I wasn’t dilating as quickly as hospital staff thought I should, so they started me on Pitocin.

Almost immediately, I felt a change in the strength of my contractions. They were still slow and consistent, but holy crap they hurt so much worse now!

So, a few hours go by. The on-call doctor checks in here and there to see how I’m progressing, but it’s mainly nurses who are in and out of the room. They changed the Petocin dosage a few times, trying to find that sweet spot that would get the contractions to do their job and open up my cervix.

I was dilating SO. FRIGGIN. SLOW.

It was more than halfway through the total labor before I had an epidural. The doctor wanted me to “hang in there” as long as I could, since getting up to pee and moving around can help speed up labor (HA! That went well for me!).

Now, I guess I can fast forward the story just a little at this point.

By hour 30, not only am I tired and frustrated, but I’m now developing a fever. The doctor instructs the nurses to add antibiotics to my IV and begin the process of pushing, at just 9cm dilated.

I can’t speak for anyone else’s experience with pushing after having had an epidural – but it was REALLY difficult and the sensation (or lack thereof) was just weird!

I pushed and pushed. I felt my upper-body muscles tensing, and assumed my lower body was doing the same. My arms were sore from the position I was laying in. I was sweating profusely and my husband was cheering me on. I held back tears as I realized I just couldn’t tell if the baby was coming or not. Somehow I was exhausted but couldn’t feel my legs.

After an hour of pushing and no baby to show for it, the doctor came in to speak with me. She explained that I was still not fully dilated, and now baby was stuck in the birth canal and just not moving in the right direction (you know, OUT!). She apologized for letting the entire production go on for so long and then said a c-section was needed immediately.

Hospital staff quickly scooped up my husband to get him changed into scrubs. My mom came into my room to give me a kiss. I was then wheeled straight to the OR and immediately prepped for surgery.

In the OR, I was a mixture of terrified and exhausted. I was transferred from my bed to the operating table by four staff members lifting me. I didn’t know who any of them were or what their job there was. This moment began a complete out-of-body-like experience for me. I saw what was happening. I was still awake, but only vaguely aware of what was happening. I felt an odd sense of panic and simultaneous calm. I was petrified in every sense of the word. I began blocking out every movement of scrub-wearing figures around me. I remember holding my husband’s hand and praying to hear the sound of crying.

Finally the sound came. I heard my husband tell me our son was here. And then my eyes rolled back and I was out. 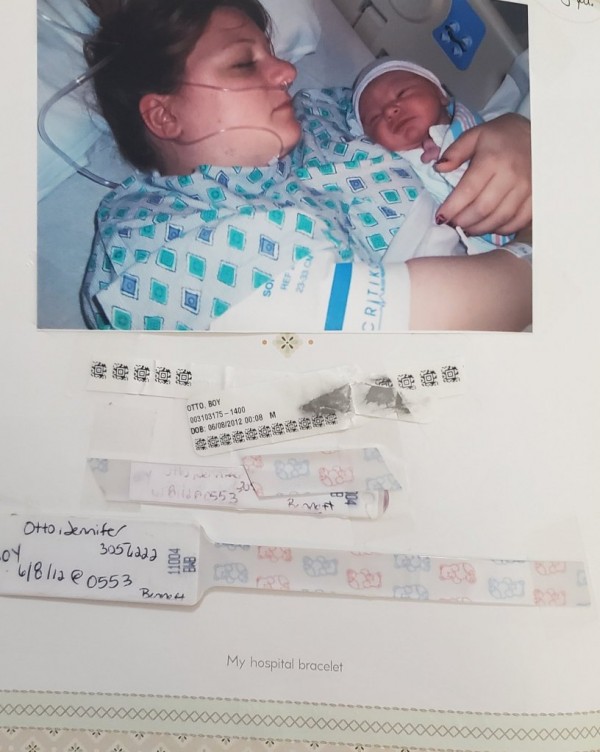 After surgery, baby was placed in my arms as I was taken to recovery. My husband tells me I was semi-conscious and kept saying I didn’t want to hold the baby because I was afraid of dropping him. I do not remember this at all.

I guess I slept for a while after. I definitely couldn’t tell you how long. 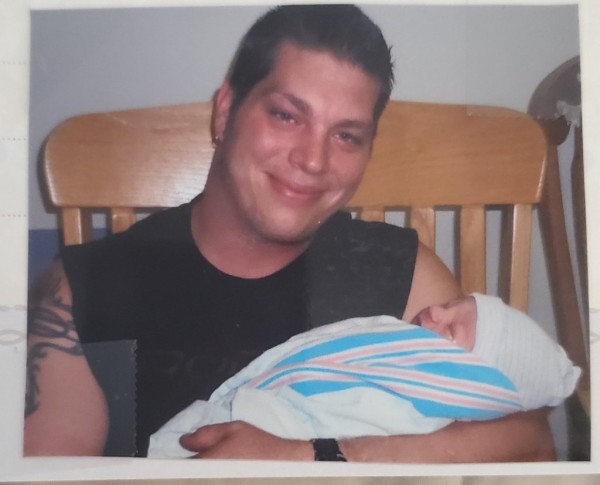 I don’t remember much of the hours after I finally woke, outside of a whirlwind of doctors and nurses checking on me and baby over and over.

I DO remember feeding the first time, but that's a whole different story.

Once I was fully conscious, and receiving visitors, I began feeling better. I was still tired. But, better.

The hubs and I proudly showed off our son to friends and family who stopped by.

A short time after, my epidural wore off and I regained feeling in my lower body.

All at once, intense feelings of physical and mental pain washed over me. This aching burn in my abdomen…it was something I had never felt before. Suddenly, it felt as though my insides were just waiting to fall out. I couldn’t move without holding my stomach. Standing up made me cry. And wait, what the HELL just happened these past few hours?

This was NOT how it was supposed to go. I didn’t sign up for major surgery. I was in perfect health and THIS is how my body repays me? What is wrong with me that I just couldn’t give birth the normal way? Everybody is happy and I’M sitting here in pain. This is not fair!

Well, friends, this is the beginning of what they call PPD (post partum depression). I won’t go into all the hairy details, and how breastfeeding being so damn hard for me contributed greatly…I think you get the picture.

I’ll just say that this began a months-long struggle for me. It took almost a full year for myself to come to terms with how “wrong” my labor and delivery went. And, while I was blessed that it absolutely could’ve turned out worse (but didnt!), it was still a hugely traumatic experience overall. 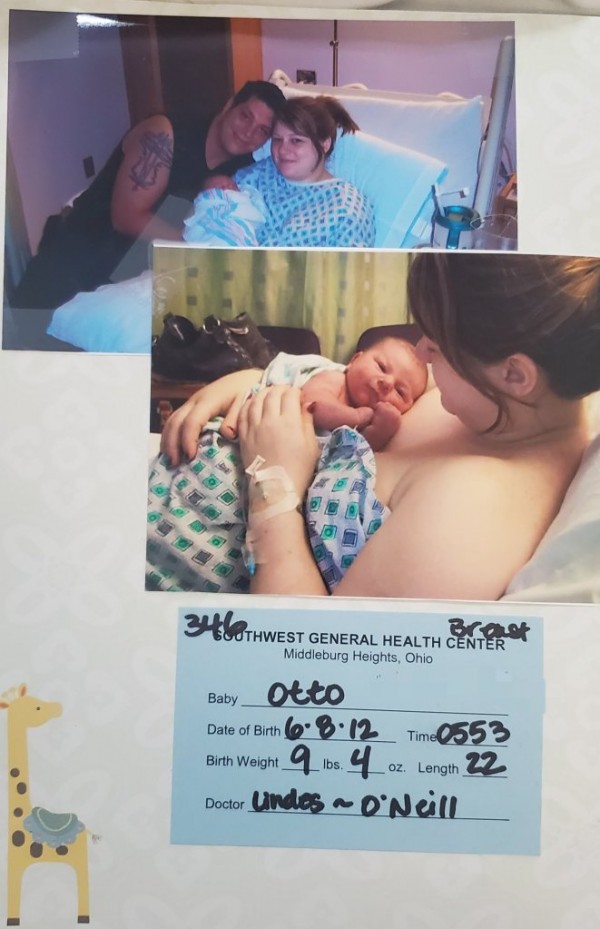 So, anyway, maybe YOUR birth story was full of magic. Maybe you had your kid in a blow-up spa in your living room, with a midwife and zero complications. Maybe your newborn ended up in the NICU. Maybe you pushed twice, gave birth, and you were up and running a marathon the next week.

The point is – this is MY cesarean birth story. It isn’t pretty, but it’s all true. And, I’m just as proud to share it as you should be in sharing yours.

We are all moms. Each and every story we have is valuable and worth listening to with open hearts.

To my labor and delivery nurses
My Birth Story
My Reluctant Natural Childbirth: What I Really Think About Unmedicated Births
advertisement

To my labor and delivery nurses
My Birth Story
My Reluctant Natural Childbirth: What I Really Think About Unmedicated Births