Locking horns: As our kids test boundaries, there will be days they win, and days we win 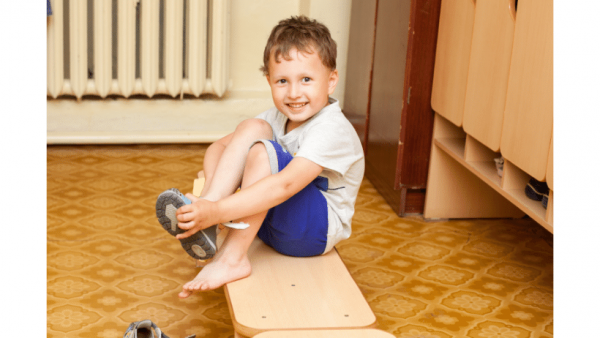 One of my favorite moments in parenting my extremely headstrong child occurred when he was about 4 years old. My kids went to a school where they were encouraged to dress themselves as soon as they were able. You know – “Never help a child with a task at which he feels he can succeed,” (Maria Montessori) and all that.

One day, I went to pick him up. I expected to see him playing outside on the playground, as he usually was at that time in the afternoon. However, my son was not on the playground. Instead, while 40 children played outside, he and a single teacher were in the mud room of the otherwise empty classroom, with locked horns.

He didn’t see me come in, so I was able to go to the side and listen to his tinny, 4-year-old voice in discussion with the teacher’s calm, seasoned one. Pretty soon I realized what was happening and that this particular interaction had been going on for half an hour already. I knew the teacher needed to win this battle of the wills.

“I can’t put my shoes on. Can you do it?” asked my son (who put his own shoes on every day), sitting on the floor, one knee up, eyes locked on the teacher.

“I’m sure you can do it,” she replied. Another minute passed.

“My velcro is broken,” he tried.

“I can see that it is not,” she answered. Another three minutes.

“Your socks do fit. You wore them all morning.” Another two minutes.

“My shoes aren’t working.” On and on it went, until I finally heard the familiar sound of the Velcro as my son accepted defeat and, instead of having his teacher put his shoes on for him, did the task himself.

At school, with professional child-guides who knew how to deal with and manage the 3- to 6-year-olds in the classroom, there was time and opportunity for this lesson. The natural consequence of his wasting so much time with locked horns was that he missed recess, his favorite part of the day. For my son, I guess something about pushing that boundary on that particular day was worth it. For the teacher, it was worth winning and holding the line, so that the next day he would just put on his shoes and go outside to recess, without a battle.

At home with me, on the other hand, usually running late and trying to get three kids dressed and out the door, the shoe battle would have put me over the edge. “Why do you have to be so stubborn?” I would say to the child who inherited at least 50% of his stubbornness from me. “Please don’t make things so difficult,” I would mutter while I roughly put his shoes on. “We are late!” I definitely would have let my frustration win.

I know I would have had this reaction because somewhere around the shoe-drama week, this same child would be reading Bob Books with me in bed. The other two children had been so compliant and eager in their learning to read. This child loved to be read to, too, but when it came time for him to read Bob Books, he was stubborn again. He hated Bob Books.

One evening, on the page that said, “The sun was hot,” he looked at me with malicious eye contact and read, “The sun was … red.” I can still remember the moment he did that. I threw the poor Bob Book on the bed, saying to my precious child, “I don’t care if you ever learn to read!” and stormed out of the room like a toddler myself. I can still remember the look from my husband, like I’d lost my mind, as I passed him in the hall and said “I cannot deal with him tonight!” Luckily, his dad then calmly read to my son, while I had my tantrum.

I am grateful for the infant and preschool teachers who taught me what my kids were capable of at each stage along the way. I have mellowed with age and now would smile fondly at a 4-year-old who was intentionally reading the wrong words just to piss me off. I even find it endearing when I see my 4-year-old patients testing their parents or their boundaries, as they are supposed to at that time in their lives.

Though I now think it’s cute for a 4-year-old to test boundaries, these days I’m just as likely to throw a tantrum and storm down the hall after mouthing off to my three teenagers. It doesn’t happen too often, but yes, I snap. We all snap sometimes. Some days, they have it coming. And some days, I have it coming. Some days, there’s no fight at all.

Kids are meant to test the boundaries. That’s how they grow. I heard or read that a toddler who never tantrums is either never told “no,” or doesn’t have her own ideas about what should occur in her world, and neither situation is good. Some days we will have the patience of the teacher who assured my son for an hour that he could put on his own shoes. Some days we will storm down the hall and act like a child ourselves. Both are OK and part of the journey.

May you have a day full of compliant children today. And if not, please at least don’t throw the Bob Book.

On Fathering
Parenting: The Most Important Job in the World
2 Things We Thought About Before Redshirting Our Son
advertisement

On Fathering
Parenting: The Most Important Job in the World
2 Things We Thought About Before Redshirting Our Son