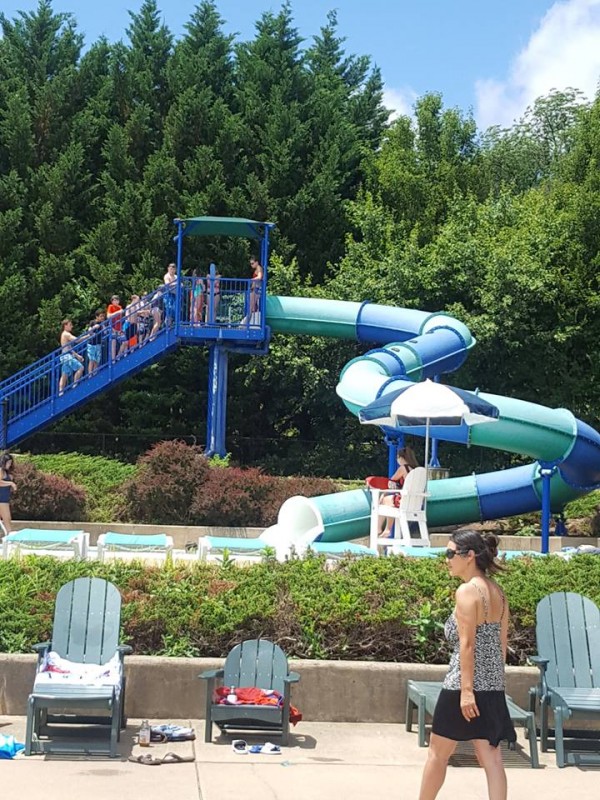 This slide is for people who are 4 foot tall.

The slide emptied into 3 ft. deep water so I knew he’d be fine to do it, but he was told he would have to take a swimming test before he would be allowed to go down the slide. The test was he had to jump in and swim one lap down the length of their pool.

As we walked with the lifeguard, I spotted the roped off section of the pool he was leading us to for the test. It was long. It was deep. He would not be allowed to go onto his back if he got tired, like he had just learned to do. He would have to swim it on his front they said. He has never swum the length of any pool, let alone one almost double the length of a normal pool. I mean, guys, I had his swim vest in our pool bag because sometimes he still uses it.

But, he really wanted to go down this slide.

I didn’t want him to think I doubted he could swim the lap, but I doubted it. I stood there and said, “I know you can do this, but if you can’t, it’s okay. Just try your best.” The lifeguard said, “Jump in and swim and if you can’t make it, I’ll throw you the floatie.” We both gave each other a slight smile. Both of us probably thinking the same thing.

He jumped in and came up swimming.

You guys…he found out what he was made of today.

He doggie paddled the entire lap with a SMILE on his face. At one point, it appeared he wasn’t going anywhere, and the lifeguard said do you need the floatie? But he pressed on, never losing that smile.

When he finished, he was so pleased with himself.

I think I heard “eye of the tiger” playing in the background…okay, no I didn’t, but it should’ve been playing! Because he had the eye of the tiger…back on his feet…rising to the challenge before him, nothing was going to keep him from that other side.

Oh, these are the moments, friends!! The times you find out what you’re made of!

Do you remember that feeling?

When you went beyond what you thought you could?

When you proved them all wrong, but it was what you proved to yourself that really made the difference?

When you did something brave?

When it was only up to you but that's all you needed?

When you set your mind to do something and nothing was going to stop you?

If it’s been awhile, let this little boy’s perseverance cheer you on to the test you have set before you, whether it’s by your own choosing or not. Swim that lap. Keep pressing on!