How Charlie Brown Made Me a Better Mom 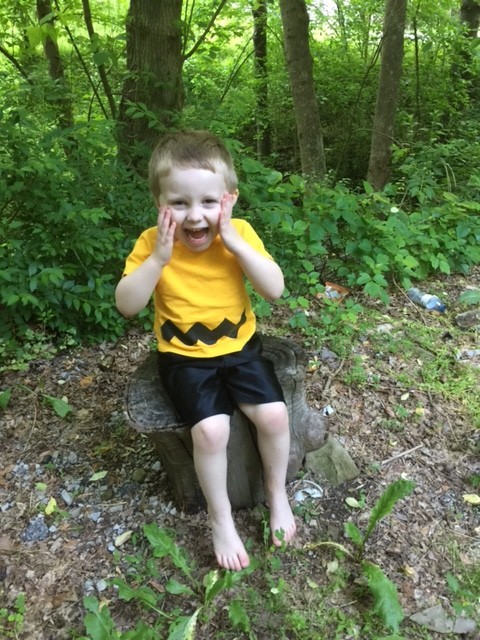 I’ve always loved Charlie Brown. Maybe because he’s kind of an odd ball who never seems to know what to say or how to act. Maybe because he was brave enough to wear a chevron shirt before it was trending. Or maybe I just feel sorry for him. Whatever the reason, Charlie Brown has always held a special place in my heart. So when my toddler took an interest in Charlie Brown and the Peanuts gang, saying I was pleased would be an understatement.

My enthusiasm soon wore thin as his addiction to any and all things Peanuts related grew monstrous in proportion. We searched YouTube for videos to watch almost daily for close to a month straight. Even with all the adoration I have for Charles Schultz most beloved character, there were still days I wanted to pretend our internet wasn’t working and someone had stole all our Charlie Brown DVDs. I didn’t do that, though. I kept watching. I'm glad I did, too. I know it sounds crazy, but Charlie Brown made me a better mom.

Here are seven lessons the little boy in the yellow shirt taught me:

The Food Doesn’t Make The Dinner: It doesn’t make the picnic, either. My son wants to have a “picnic” every day after school (school is really daycare). It usually consists of a pack graham crackers or a chocolate sucker. Our untraditional picnics are just like the dinner of popcorn, toast, pretzels, and jelly beans Charlie Brown served his friends for Thanksgiving. Peppermint Patty was furious until Marcy reminded her the holiday is less about what you’re eating and more about who you’re eating it with. This is especially true for children. I know our picnics are about more than a snack before dinner. He just wants a few minutes of my time before we head home and our picnics give that to him.

Let Them Play Ball. Even if it’s with a football you know will be pulled out from underneath them. Even if it’s baseball and their team is the dead last in the league. There are lessons to be learned along the way, like how to deal with disappointment, how to be a good winner (or loser), the importance of working well with other children, and how to have to keep trying even when the task at hand seems too hard.

Children Need Space. In all the Charlie Brown episodes I’ve watched, I don’t think I’ve ever seen an adult. Parents are mentioned and the audience does hear the teacher’s infamous voice occasionally. Overall, though, children are able to work out the day-to-day problems they face amongst themselves and for the most part, they do a really good job at it. This forced me to realize my son doesn’t need me as much as I think he does. Worse still, he’s going to need me less and less as the days go by. It’s hard, but I have to give him the space he needs to grow.

Forgiveness is Simple: At least for children, it is. No matter how many times Lucy pulled the football away from Charlie Brown, he never held a grudge. He didn’t forget what she did, but he just chose not to let it ruin their friendship. He forgave her and in the next episode it was like it never happened.

Be Specific With Instructions: In an Easter episode, Peppermint Patty tries to teach Marcy how to color eggs. While she fixes the coloring cups, she tells Marcy to get the eggs ready. Marcy fries them, bakes them, tries to toast them, and essentially poaches them. The friends go through three dozen eggs and never get a single one dyed. The instructions were too vague and when you give children something to do without telling them exactly how you want it done, you’re asking for trouble. Case in point, I used to tell me son to wipe his hands off, until I realized he was wiping whatever was on them in his hair. Now, I tell him to wipe his hands off with a wipe. Specifics are key.

A Child’s Trust is Fragile: It’s no secret Sally loved Linus. She even skipped trick-or-treating to wait for the Great Pumpkin with him. She was completely let down at the end of the night. Later when Linus tried to tell her about the Easter Beagle, she reminded him of the disappointment he had caused her and warned him not to make the same mistake again. I try to remember this before making any kind of promise to my son. I know after the first time I let him down, he’ll wondering when the next time will be.

Empathy Is Not Learned: My son’s absolute favorite episode of Charlie Brown is the one staring Janice, the adorable blond Linus falls for. She spikes a fever and is eventually diagnosed as having Leukemia. There is no possible way my child could understand what that a diagnosis like that means right now. Still, every time he sees Linus cry, he points directly at him on the screen and says “uh-oh” in his mommy-fix-it voice. He not only understands Linus is sad but feels that sadness himself. His emotional IQ is so much higher than I originally thought and I would have never known it without Charlie Brown.

The search for Snoopy is a continuous one. We still scourer for videos and hunt for coloring books. Each time we find one, my son’s eyes light up and his mouth spreads into that infectious smile he wears so well. I smile too, because I know there’s a lesson I can learn hiding somewhere behind the dancing beagle and his loveable owner.

I am a wife, mother, and daughter trying to find contentment in a world of chaos. I am striving to live a life like baby bear soup.

OUT OF MY WAY....and straight in to your heart forever!
Muddy Puddles
My Son, Ferdinand the Bull
advertisement

OUT OF MY WAY....and straight in to your heart forever!
Muddy Puddles
My Son, Ferdinand the Bull