Published by Jennifer Swartvagher on February 25, 2018

I spotted the puddle the minute we walked onto the field. Linus’ eyes lit up, but he didn’t let on that he noticed it. Playing with his siblings, I saw his eyes dart over a few times. I imagine he was concocting a way to maneuver closer.

That puddle was so tempting, even Josie stopped to point it out. Linus headed over to it but he faked us out, and walked past it. Circling around the back of the enormous puddle, he climbed up the side steps leading to the gymnasium, and sat down. I watched as he carefully, he removed his sneakers.

I knew what was going through his head. The day before, he had to endure a quick trip to the grocery store with wet feet. He was thinking ahead this time.

Before I could even say anything…SPLASH!

Josie crouched down besides the puddle. She watched in amazement as Linus danced through the water, stirring up the mud beneath. Josie looked up at me, wondering if she should venture in as well. She was content to stay at the outskirts, letting the tip of her sneaker graze the water. She likes to be cautious…and dry

Compared to Linus’ size, the puddle seemed more like a small lake. He squealed with joy as the water danced up, tickling his ankles, and eventually saturating the bottom of his pant legs. As he scrunched his toes, I could see the mud weaving in and out of each crevice.

I could feel the disapproving glances on the back of my neck before I saw them. Particularly the ones coming from my older children. I never let them be as free as they wanted to be, always worried what others would think of me. As expected, the other parents turned away, pulling their children in a little tighter.

Was everyone expecting me to scold him?

Quickly, I snatched Linus from the puddle. Sitting him on the sidewalk, I told him to stay by my side. My older daughter chastised me for having a smile on my face as I spoke to him.

As soon as I distracted Linus from the puddle, I felt guilty. Why shouldn’t he splash with wild abandon?

I turned a blind eye as Linus ventured toward the puddle again. I couldn’t help but smile as I watched the joy overcome his face as he ran from one side of the puddle to the other. By this point, his pants were wet to the knees. The only thing that mattered to me was the sound of Linus’ laugh as the water splashed around him. 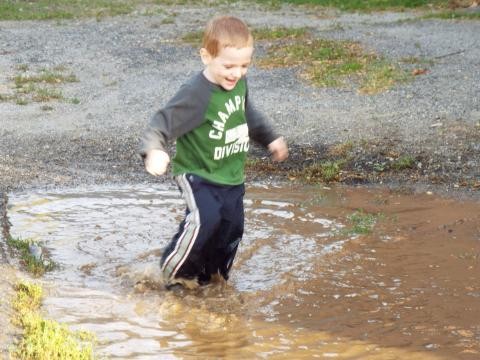 The miracle is that Linus came to us when we most needed him. He is my free spirit. You cannot hold him down. Linus breathes in sunshine and exudes energy. He needs to run, and climb, and make his Mama nervous as he jumps from step to step. Besides snuggling on my lap, standing in the middle of the largest puddle, digging his toes into the mud is where he is the happiest.

My babies are growing up so fast. I realize now, how fast it really does go. I want to teach them that getting dirty can be fun and trees are meant for climbing. There will be more nights of having ice cream for dinner followed by building pillow forts and three extra bedtime stories. Lets hold on to childhood a little tighter. There is plenty of time to grow up.

The Beauty and Challenge of Being 35
My son drowned, and in my last video of him all I see is a puddle jumper
Splashing In The Rain
advertisement

The Beauty and Challenge of Being 35
My son drowned, and in my last video of him all I see is a puddle jumper
Splashing In The Rain