Published by Jorrie Varney on December 8, 2017 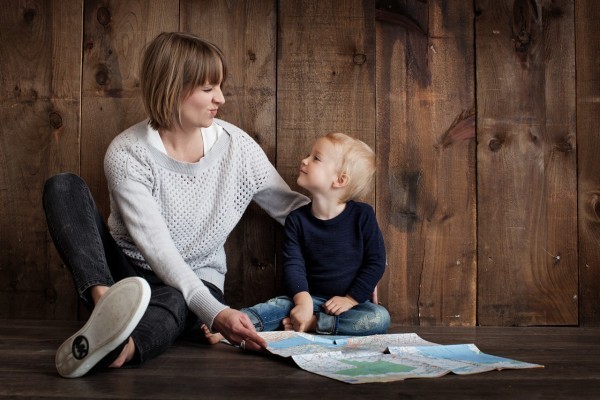 I’m seated at the kitchen table, drinking coffee, when he walks in from outside, sweat on his brow and dirt covering his hand. As he approaches a proud smile grows across his face. He extends his hand and presents me with a single, mangled, half-dead dandelion. While some would consider this nothing more than a common garden weed, to a mother, this gesture is one of the truest symbols of love.

My 3-year-old son is “all boy” as they say, rough and tumble from head-to-toe. He is dirty, and sticky, and as wild as a pack of raccoons, but under all the grime and male bravado, lives the sweetest soul I have ever known.

I became a mother for the first time five years ago with the birth of my daughter. She is a free-spirit who brings me constant joy. We are simpatico, her and I. When I learned I was pregnant with my son, it was hard to imagine my heart could hold any more love. I worried I could never love another child as much as I love my daughter. Our relationship was so precious — her soul a mirror image of my own. How could anything ever come close to what we shared? But then he was here, and it was as if he always had been. There had always been a space in my heart, reserved just for him; I just hadn’t known it.

It’s been said that there is nothing like the relationship between a mother and her son, and while I might have argued this before he was mine, I can say now, with absolute certainty, this is true.

Since the moment we met, we’ve shared a special connection. Where my daughter and I are so similar, he and I are so different, yet somehow we fit together perfectly — he is the peanut butter to my jelly. It takes nothing more than a look, or a touch, for us to understand one another. Of course, I still like to yell about mud on the carpet, or a spilled drink in the kitchen, from time to time, but that’s just the mama in me.

My boy is good at many things, but sleeping is not one of them. You might say, he’s a child of the nocturnal variety. Because of his borderline-neurotic sleep schedule, we became accidental co-sleepers early on. I’m a firm believer in sleeping, so I don’t care where you do it, as long as you do it. My bed, your bed, a basket on top of the refrigerator — don’t care. As long as you’re sleeping, mama is happy.

Now, three years later, he stills sleeps next to me, every night. While this has definitely brought us closer together, it’s about as awful as it is amazing. I mean, I love all the snuggles, but I’m not a huge fan of anyone shoving their cold, tiny feet in the back of my underwear at 3 am. Or the restless thrashing that always seems to leave me injured. I love him despite his sleeping behaviors, and I let him torture me every night because sleeping next to me is where he is most comfortable.

My husband says I’m soft, not the squishy-extra-skin sort of soft, (although that would also be an accurate description) but the “you let the kids get away with murder” soft. If it were up to him the little man would be out on the streets. OK, not the actual streets, but he would definitely be forced to sleep in his own bed. Not me though, I’m wrapped tightly around the proverbial finger. If he feels most comfortable sleeping next to me, then so be it. He won’t want to sleep next to his mama when he’s a teenager; I’ll probably lose my cool-mom status long before then, so you won’t see me turning him away at the gate.

The truth is, I rarely tell him no unless he is going to die or kill someone, which happens more than you might think. I don’t give him everything he wants, but most people would probably say he’s spoiled. Most people would call him a mama’s boy. He’s only three, so it’s not too hard to spoil him, it really only takes an extra pack of fruit snacks and some chocolate milk, and I’m the greatest mom ever. I’m his favorite, and I like it that way.

When he crashes his bike, it’s me he calls out to. I dry his tears, give him a Band-Aid and a pep-talk, and send him on his way, good as new. “Thanks, I love you, mommy.” He says as he runs back outside. Aside from half-dead dandelions, “I love you, mommy” is where it’s at. If I heard it 100 times a day, it would never be too much. Little boys are great for your self-esteem.

I’ve been living the good life for three years now, but the tide has started to turn as my son grows from toddler to little boy. He has discovered that daddy also loves dirt, loud machinery, and fart jokes. He has started to stray from my side, in favor of a rowdier crowd — the daddy crowd. As a mother, I am both overjoyed and terribly sad to watch the sweet relationship between my husband and my son blossom. It is everything you would want a father-son relationship to be, and if he grows up to be just like his daddy, the world will gain another beautiful, kind man. It’s silly to be sad, but I know this means he won’t need me as much as he once did. He won’t need me to kiss his boo-boos, or dry his tears. He won’t need me to hold him during spring thunderstorms, or when he’s had a bad dream. He’s becoming exactly who I hoped he would be — a strong, happy, independent boy... but I’m just not ready.

Some may call him a mama’s boy, but the truth is, he just a boy, and I’m his mama. I would walk through fire for any of my children if it meant they were safe and happy. I will always feel this way, no matter how old they are, or how little they really “need” me. When my son comes home from college with an empty belly and a basket full of dirty laundry, I will gladly wash his dirty socks, make his favorite meal, and send him back with a giant plate of cookies, because that’s what a mother does — she takes care of her babies. He will always have a piece of my heart, and I will always be there for him because I’m that boy’s mama.

Originally published in the book "The Unofficial Guide to Surviving Life With Boys."

For the love of a child
Losing His Nap and Finding My Inner Peace
Yes, My Little Boy Has Long Hair, And You Can Keep Your Judgment to Yourself
advertisement

For the love of a child
Losing His Nap and Finding My Inner Peace
Yes, My Little Boy Has Long Hair, And You Can Keep Your Judgment to Yourself