Girls' Night Out as a Mom: Worth the Wait and the Effort 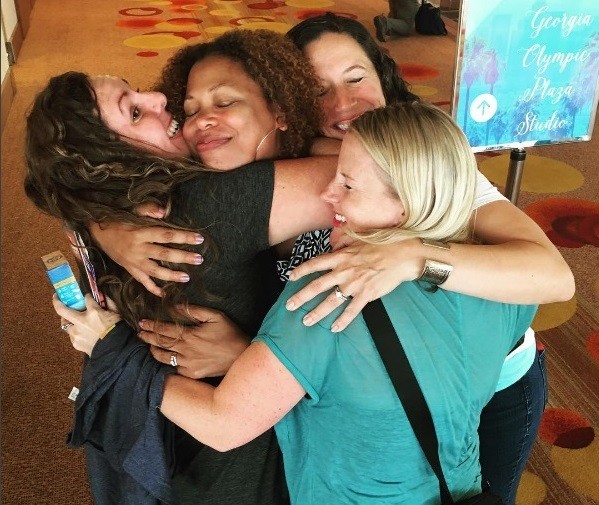 As a girl, I pursued fireflies in the yard and captured them in a pickle jar with small holes carefully punched into the metal lid. Not much of a nature lover, I was surprised that I enjoyed the tickle of the small bugs tiptoeing across my skin when I caught them, and I laughed with glee. It was worth the patience required to find them and watch them glow, and then release them back into the air to live. I chased fireflies with my son this summer, gently catching them in our hands and then letting them fly again.

As mothers, we are the fireflies. We alight, flitting from place to place until we can stop and rest and share our light with others. It is exhausting to both be and to watch.

Planning a night out with other moms sometimes takes as much patience and luck and timing as it did to catch a firefly when I was a child. An invitations is issued, and perhaps one friend’s husband is traveling that day. Or another has another commitment. Or homework takes precedent. The event responses say “Yes” and or “No” but most often “Maybe” because our schedules, when we have children, hinge on child care and everyone staying well.

Plans are cancelled at the last minute, or changed, or adapted. We don’t get frustrated with each other because we know that all of have been in that situation and we will afford each other the grace that we were given too.

Just before I turned 30, I moved from Cincinnati to Atlanta, and met new friends every week. We convened on Wednesdays for trivia night and Saturdays to stay out late. We had no responsibilities except for ourselves, and our rent, and our bills; we had no idea that we were as carefree as we were then. Friendship looked like common interests and the ability to make each other laugh and listen to each other’s grievances about men and work.

Friendship looks both same and different now; we still laugh and listen and share common interests or even the occasional margarita, but those moments are condensed and squeezed into smaller slivers of time. Instead of afternoons lounging by the pool or happy hours savoring seared tuna and truffle fries, it’s thirty minutes walking together while the kids are at school, or an hour spent together chasing toddlers around the park and catching a sentence or two as you run in opposite directions. Those friends I had in my 20s now have two and three children and when I do have a chance to talk to them on the phone, it’s magical. The friendships are still there underneath the chaos.

A gesture of kindness from a friend who is a mother includes tolerance and understanding. It looks something like admiring the decorations on a friend’s car for her son’s birthday, and her saying, “I saved the rest for you for your son’s birthday next week.” It’s lunch when we are feeling frazzled or a plate full of muffins dropped off at our porch. It’s a bag of coloring books and small toys for your son when he comes home from the hospital after surgery. It’s a quick text to say, “I’m thinking about you” when you don’t have time to talk on the phone. Because there is so little time to talk on the phone.

It was another mother friend who recognized that I was drowning in postpartum anxiety and reached out across the miles to insist that I see a doctor. It was a mother who brought me my first dinner home from the hospital. It was my sister, already the mother of three, who flew across the country to teach me how to bathe my son and ease my fears. And my own mother and mother-in-law who endured my nitpicking at the way they held, changed, and attended to my new baby without a squeak of retort. They all understand.

I have learned that I can still keep my friendships with women without children as well and their friendship contributes to that survival. Last fall, my best friend from college called me just as I was picking up my son from kindergarten. My son was chattering in the backseat, as five-year-olds do constantly, trying to join the conversation. He interrupted me to tell her all about his day.

“I love it,” she said, without a trace of irritation. “I’m so glad that I get to be a part of your day.”

It’s these adaptations and understandings that give us the grace we need to lean into our friendships from different angles. The list of friends I want on my personal board of directors, as a mother, includes the ones that make me laugh. The ones that give me their shoulder when I cry. The ones who boost my spirits when I am feeling low. The ones who tell me the truth, and sometimes tough love. The ones who love my son as their own. On any given day, each friend offers a little bit of each of these things. They allow me to go about the business of having a complete and happy life.

For now, planning girls’ night takes a little more patience, and we might not all get together at one time. The group is always morphing and changing and we wait until the next time we can catch up.

It’s worth the wait, every time.

This post first appeared on the author’s blog, Two Cannoli. Kristin Shaw is a freelance writer, a 2014/2015 BlogHer Voice of the Year, and has been published by The Huffington Post, The Washington Post, Scary Mommy, and other national sites. She is also the co-producer of the Listen To Your Mother show in Austin, Texas, and is the director of social media for Airport Improvement magazine. Find her on Facebook, Twitter, and Instagram.