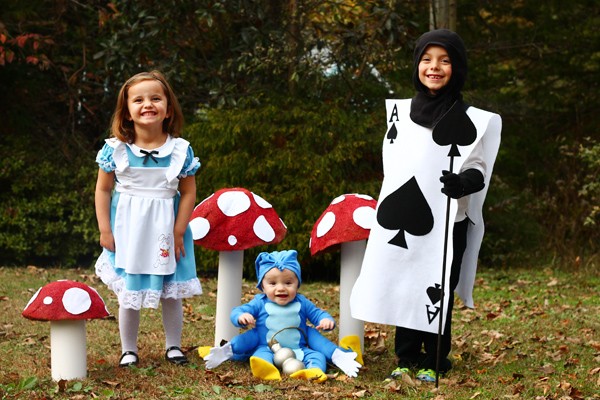 Two Halloweens ago, we decided to do Alice in Wonderland for a family costume theme. It was inspired by a family movie night where we watched the classic Disney Alice movie and my oldest son Elias was mesmerized by the Queen of Hearts' cards. He said he would like to be a card, then my then 4-year-old daughter Adeline said she would be Alice and we went from there.

After searching for Alice in Wonderland themed costumes on Pinterest, I decided our 10-month-old Ezra would be the caterpillar. Originally I was going to be the Queen, but the costumes were so expensive and I didn't have it in me to make a Queen costume. I then decided that my husband Matthew and I could be Tweedle Dee and Tweedle Dum. It seemed like the costumes would be very easy to make, which had me sold! Closer to the holiday, we found out that Matthew would be out of town, so my Dad graciously stepped in. 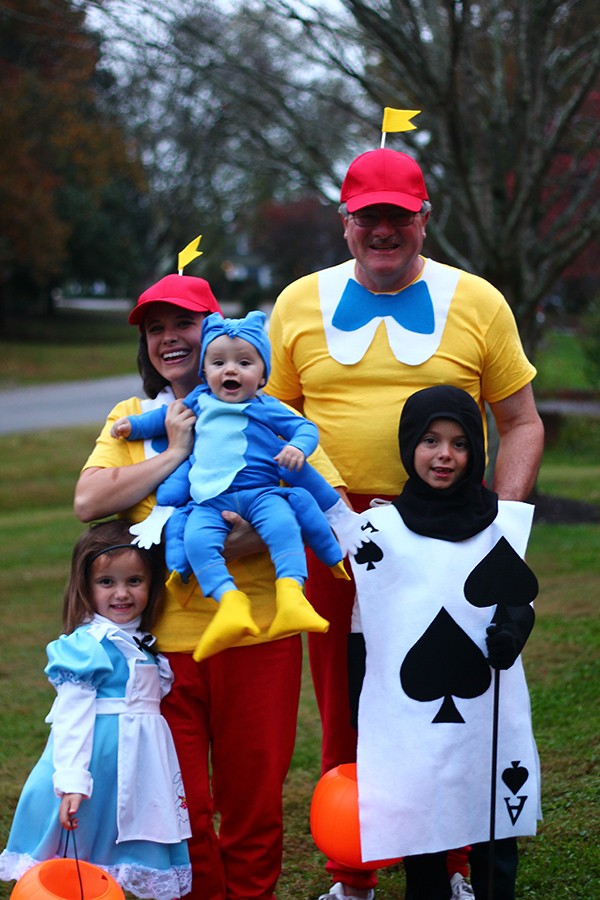 My Alice in Wonderland 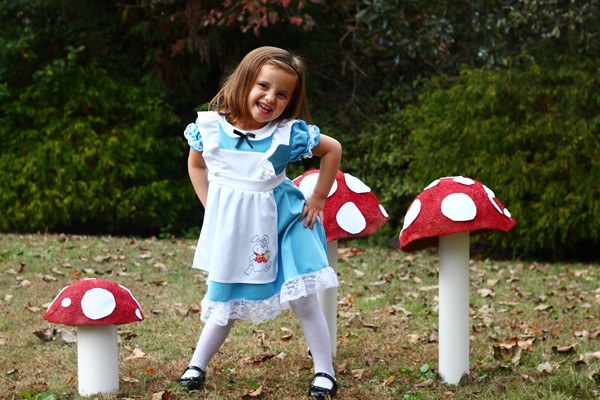 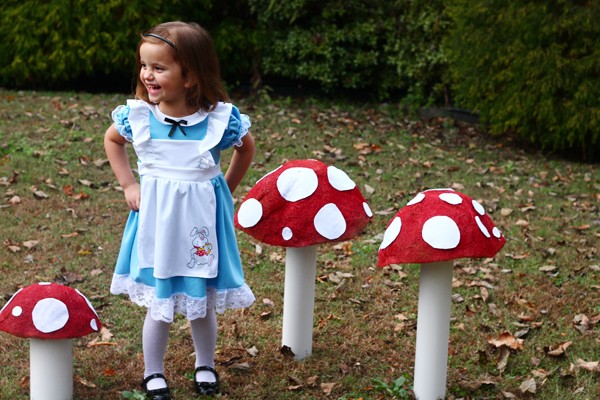 Adeline adored her Alice dress, which I found on Amazon. I paired it with a pair of white stockings and classic black mary jane shoes. The dress was only $15, and I was incredibly impressed by the quality given the affordable price. (The mushrooms were leftover decorations from Adeline's fairy party.)

The Card from Alice in Wonderland 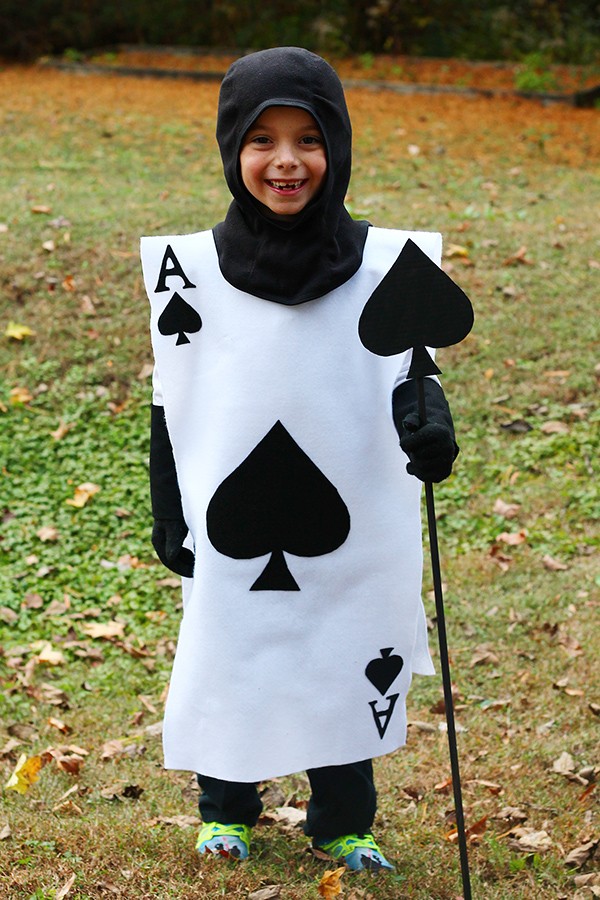 Elias was THRILLED with his costume, and everyone who saw him loved it, too. To make the card, I folded over a large piece of white felt and cut a hole for my son's head. I then used Stitch Witchery to iron on the card details. The hat was a simple ski hat I bought on Amazon. 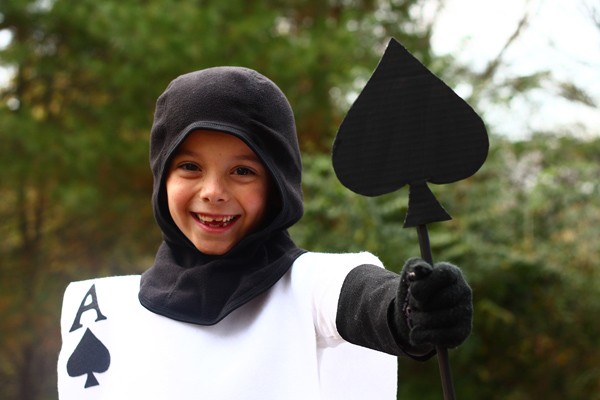 We then added black gloves and fake felt wraps around them to make the gloves look large. An Ace of Spades spear made of a dowel and cardboard Ace completed the look.

The Caterpillar from Alice in Wonderland 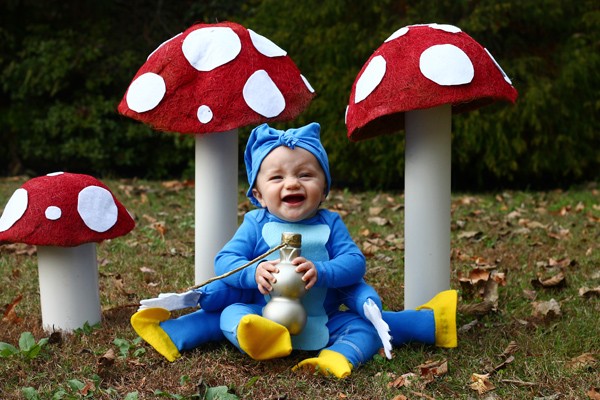 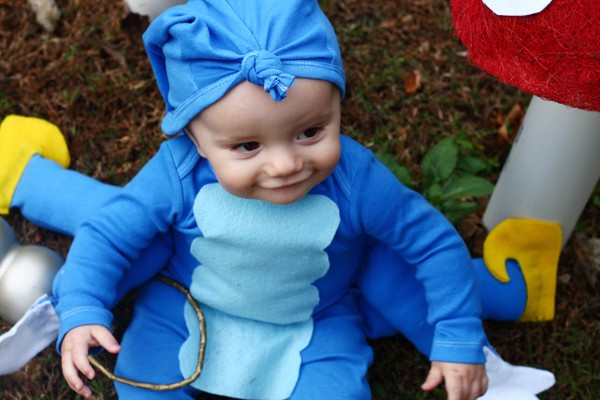 Ezra's costume might be one of my favorites I have ever made. I dyed several Carter's white onesies + a pair of white pants, then sewed on the arms and legs. With a leftover onesie, I made his turban. 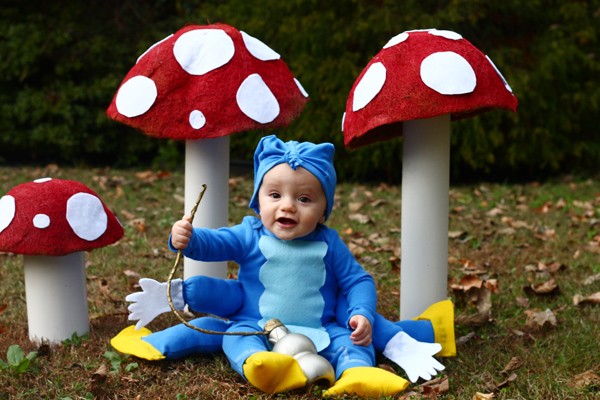 To make his hookah, I spray painted a POM Wonderful bottle, then added a rope covered in gold washi tape. It completed the look and was hilarious. Click here for a full tutorial. 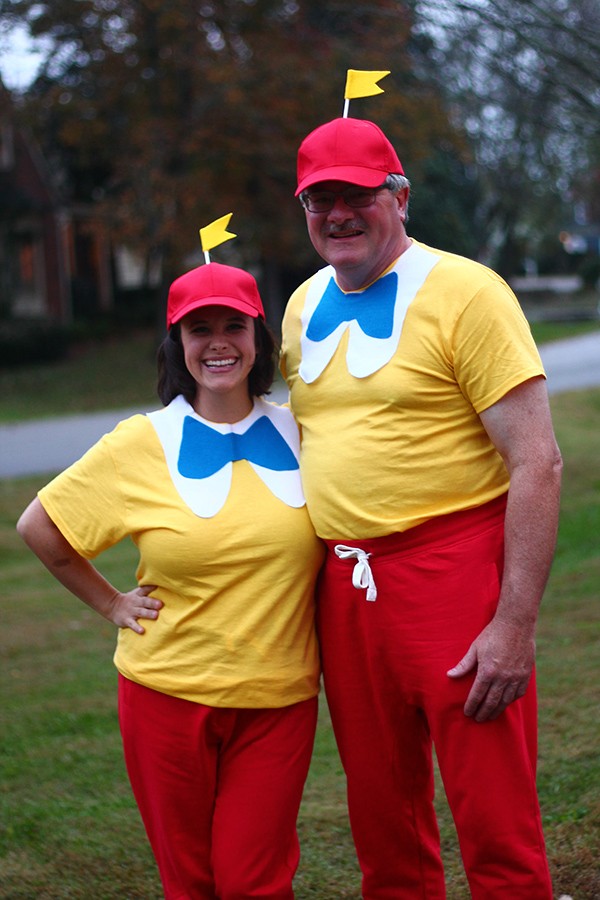 My Dad and I went as Tweedle Dee and Tweedle Dum, which was the perfect way for us to get in on the theme, while wearing costumes that weren't expensive and didn't take a lot of time. The kids were AMAZED and so, so excited about our costumes. I bought red hats, felt and yellow t-shirts at Michaels. I found red sweatpants on Amazon. To make the shirts, I simply attached the collars and bowties with Stitch Witchery. The hats were made by drilling a hole in the top of the hat, then hot gluing a candy stick with the flag attached. Easy peasy!

We always do a family Halloween theme, but I think Alice in Wonderland will always be one of my favorites.

For more family costume inspiration, check out our Little Red Riding Hood and Wizard of Oz costumes (yes, my husband was the tornado!). And for other easy kid DIY costumes, check out this sweet pink owl, Wonder Woman, a gnome, a candy corn and Captain Underpants.