Celebrating Four Holidays in the Hospital 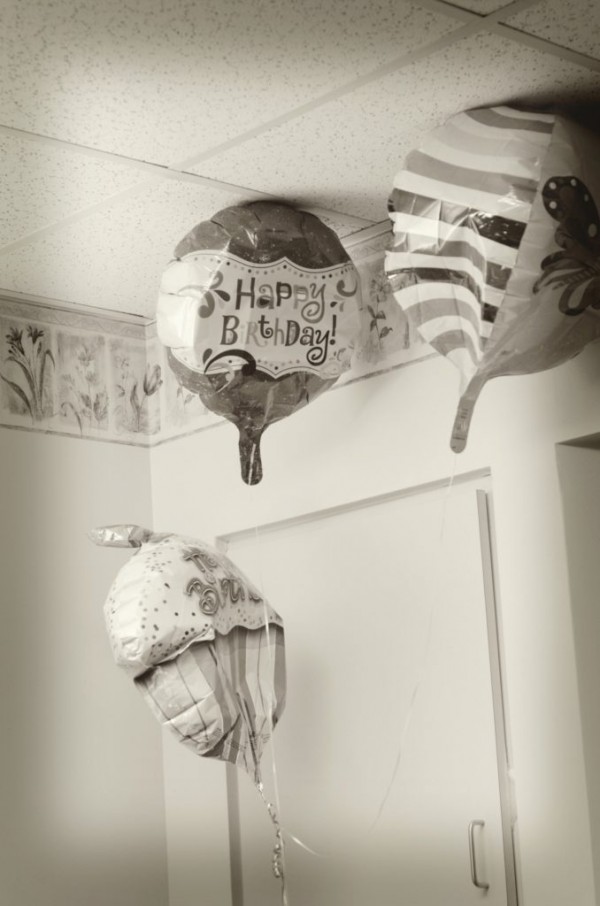 When I checked into the hospital, we prayed that I’d be there for a very long time. That sounds strange, but if I was in the hospital for three months, that meant three months of that sweet boy growing in my tummy and not struggling to survive in the NICU.

The holidays became a wonderful distraction for my worried mind.

Each day, as I was woken around 6 a.m. for the doctors’ rounds, I was reminded where I was and the scariness of the situation as I looked around my hospital room. The doctors would feel my belly, ask a few questions and tell me to keep hanging in there. Soon after, my PCA would take my vitals and my nurse would come in for a fetal heartbeat check. This nurse/PCA routine was repeated every four hours around the clock. They were some of the most wonderful people ever, so seeing their smiling faces and chatting with them every few hours, while yet another reminder of my situation, actually had a nice calming effect during those first weeks.

Halloween marked just under four weeks in the hospital (and 27 weeks along!). I was sad to miss shopping for the boys’ costumes, trick-or-treating, and the school parties and festivals. But, Jeff and our friends and family sent pictures so I could see all the fun. And I had some visitors who brought me some sweet treats (so many Kit Kats!) and festive gifts! 🙂 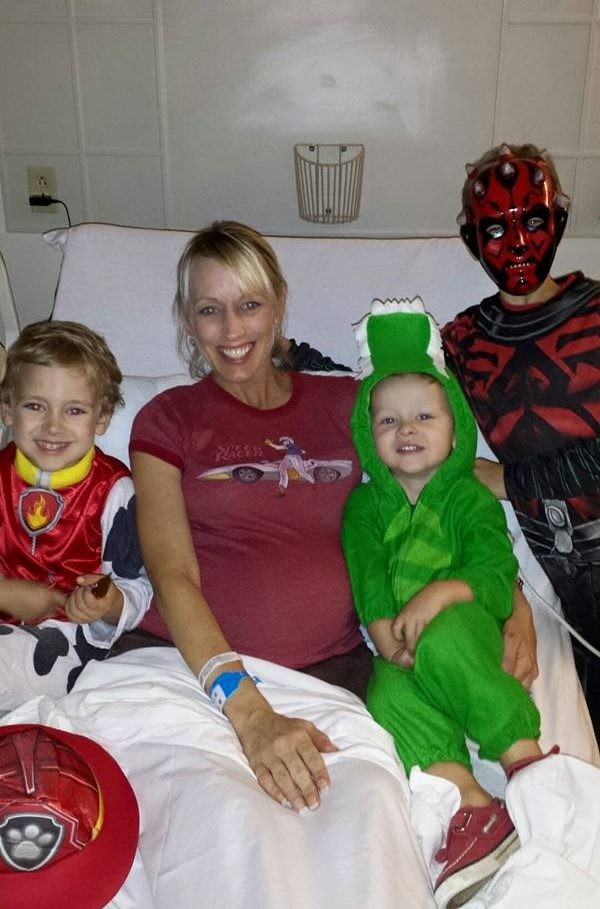 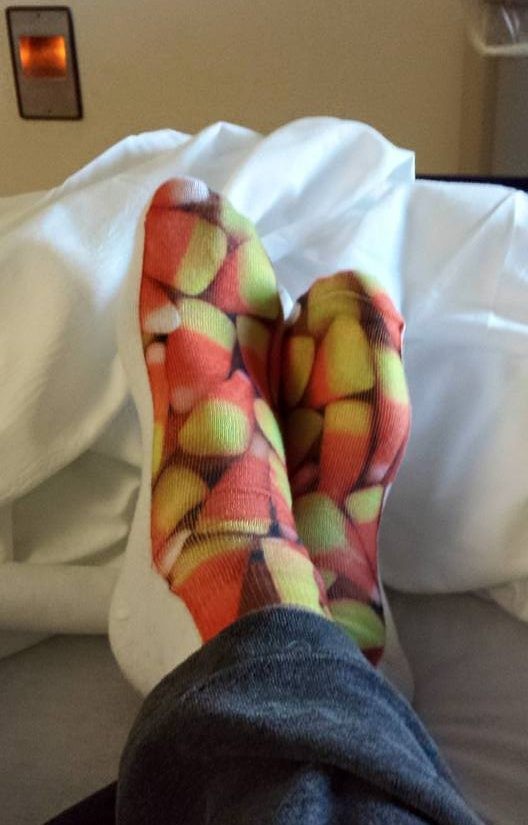 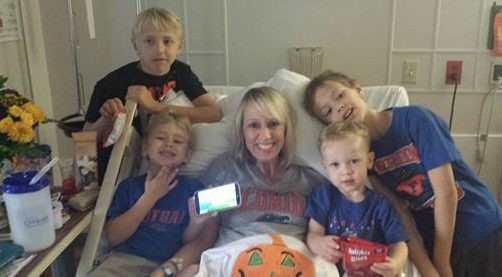 *Halloween was also the day of the FL-GA game, so I had a visit from my Gator-garb- wearing boys on their way down to Grandmommy’s house for trick-or-treating.

And Carson brought me a painted jack o’ lantern t-shirt he made for me. (The "Arts in Medicine" lady brought it to my room for me to paint, but, yea, me and crafting…)

Almost two weeks after Halloween, we celebrated Jeff’s birthday. I was 29 weeks along (yaay!) and had been in the hospital for six weeks. We had made it to the magical goal of 28 weeks gestation and were elated that baby boy was measuring almost 2 pounds on the most recent ultrasound. So many things to celebrate! 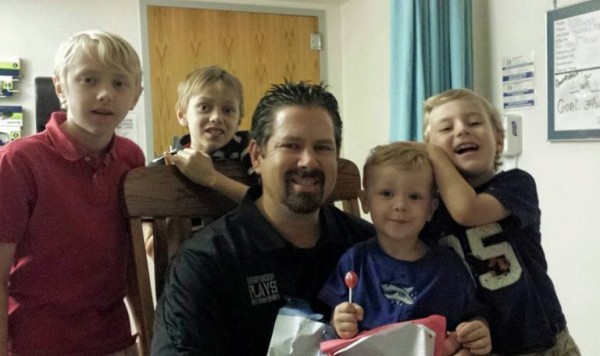 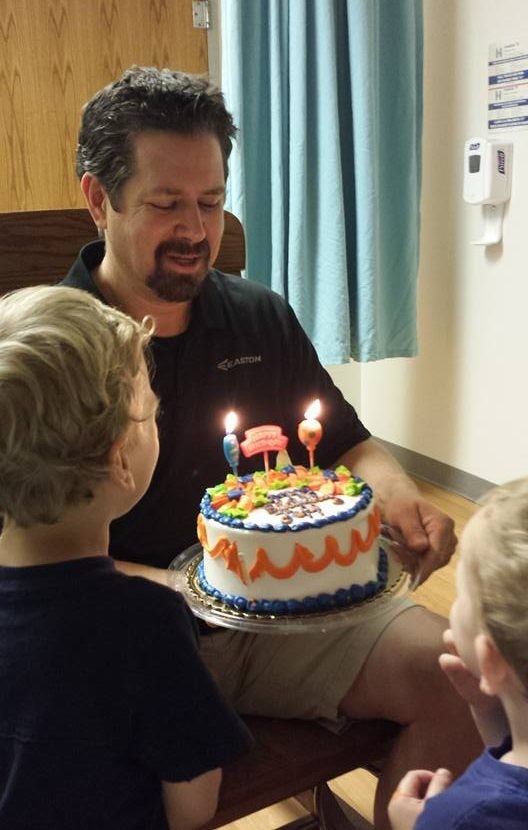 *I ordered his gifts online and had the sitters hide the boxes when they were delivered to the house. On his birthday, I told him where they were and he brought them up to the hospital to open. And, yep, he picked up his own cake and candles. 🙂

We could not believe I was still there when my birthday rolled around–not in a bad way, just in shock that I hadn’t gone into labor or developed an infection (both are extremely common when the amniotic sac is torn). I hit the 30-week gestation mark just a few days before my birthday! 30 WEEKS!

We still wanted him to stay where he was for several more weeks, but we knew his chances of being healthy were so much better now. Even with the situation I was in, this was one of the best birthdays ever because we were celebrating this milestone too! 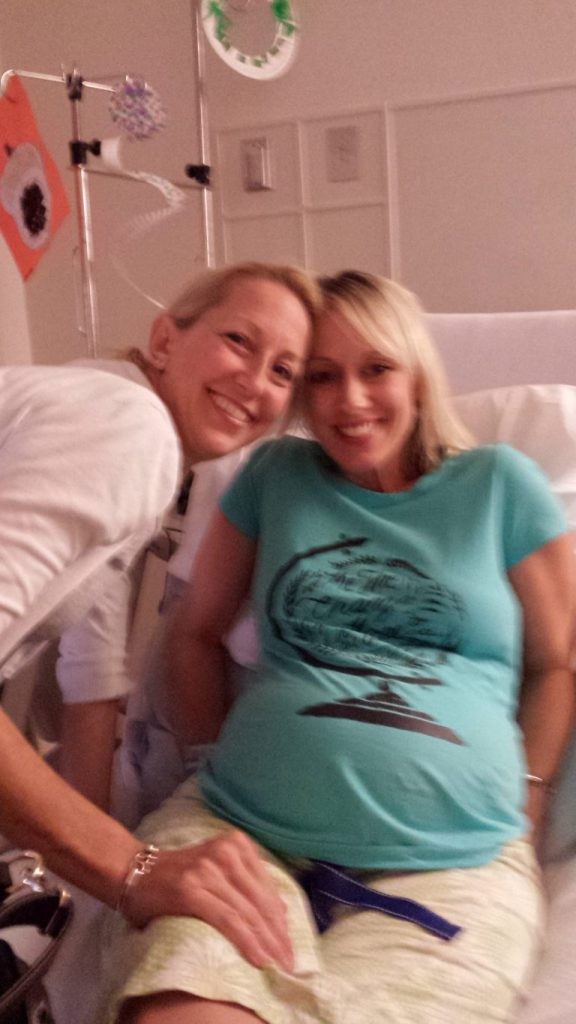 *Blurry pic but I love it! This is my big sister, Dede, and you can see some of my boys’ artwork hanging from the poles behind me. We decorated the walls and bedside table with all the pretty things they were making in school for the holidays. 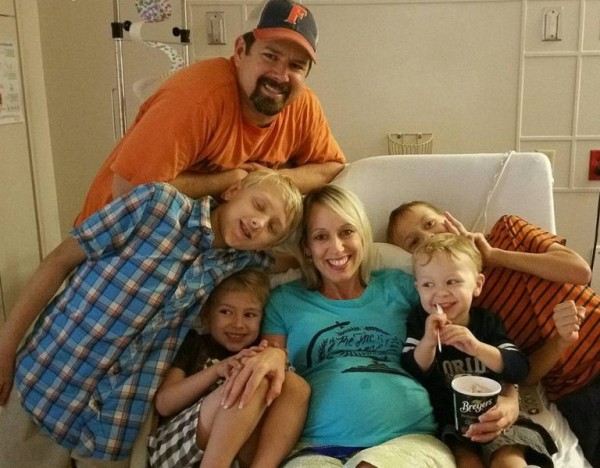 *My crew helping Mommy eat her ice cream! 🙂 And my belly was a crazy shape around this time because baby had decided to lay sideways! 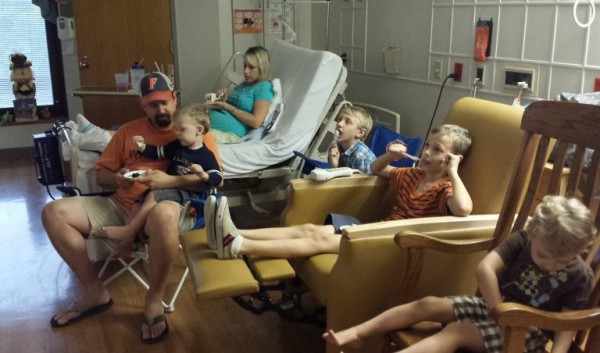 *Cake and watching Sunday afternoon football! It felt like I was at home! 🙂 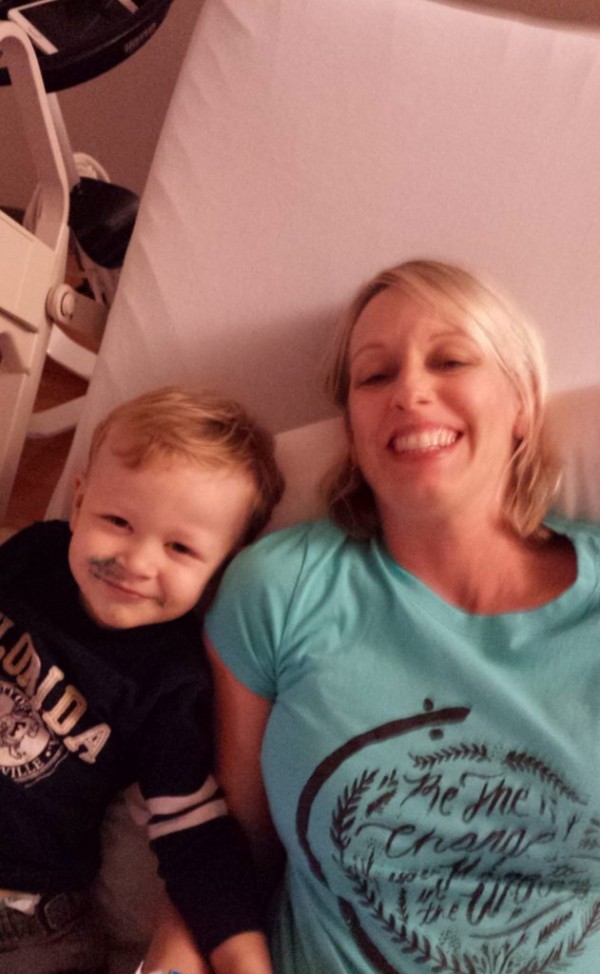 *Birthday entertainment brought to you by Mommy’s mechanical bed … little guy could do this all day long! (Don’t mind the blue icing on his face! This boy was partying! Haha!) 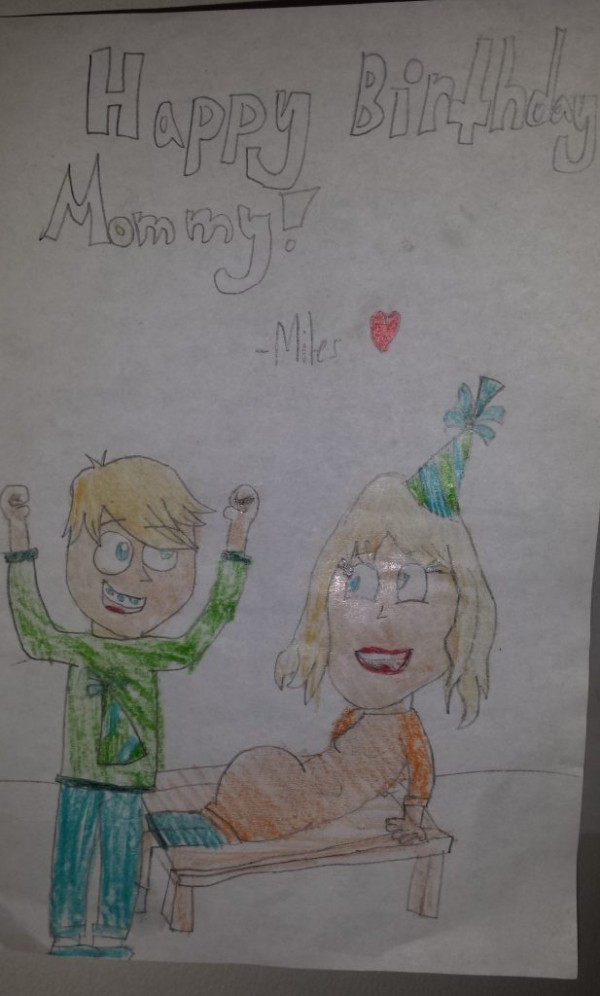 Thanksgiving was unbelievable. It started just as every day for the last 8 weeks had … doctors’ rounds, PCA/nurse check-ins, breakfast, and a stress test over in Labor & Delivery. But this morning I was watching the Macy’s Thanksgiving Day Parade (instead of my routine Today Show), and starting to really feel the loneliness of being away from my family. Normally, we watch the parade together and run around getting ourselves and the food ready to take over to my Aunt Linda’s house for lunch and family time. It felt so strange to know everyone else was getting ready for the day together, and I was alone in pj’s judging the terrible lipsyncing of the parade performers. But early afternoon … this arrived.

*Jeff brought a whole Thanksgiving dinner from Boston Market, a folding table, plates/utensils, etc., drinks, and a microwave to the hospital. I was floored. This man won the Husband of the Year award that day, if he hadn’t already earned it from the previous 12 weeks. He brought me out of my grumpy slump and made me cry happy tears. 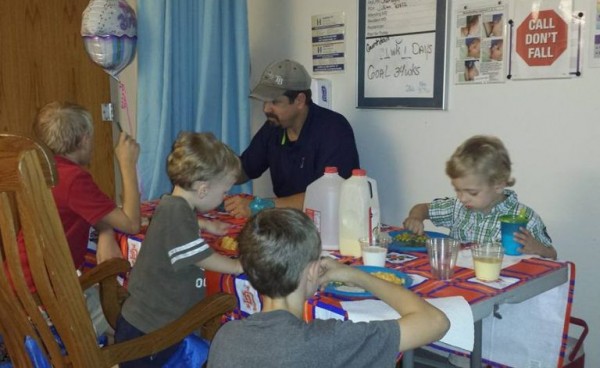 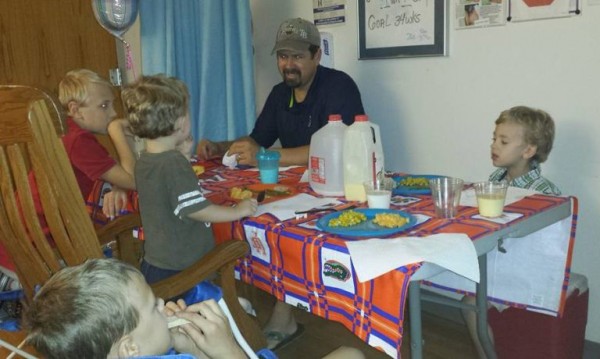 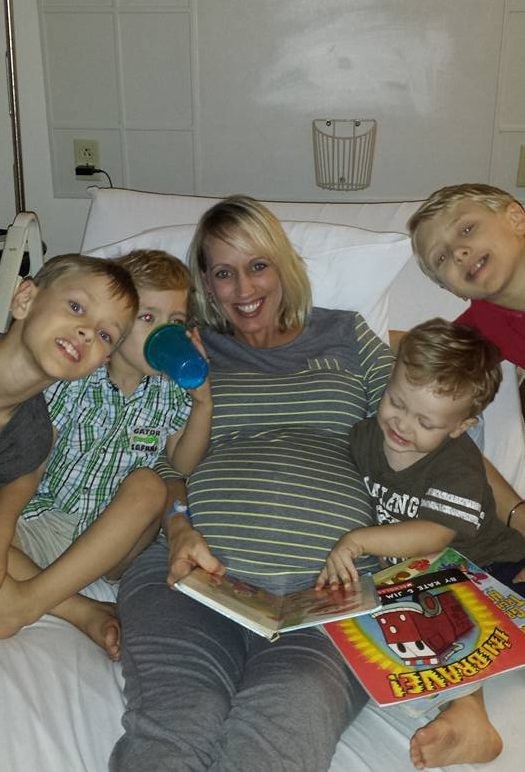 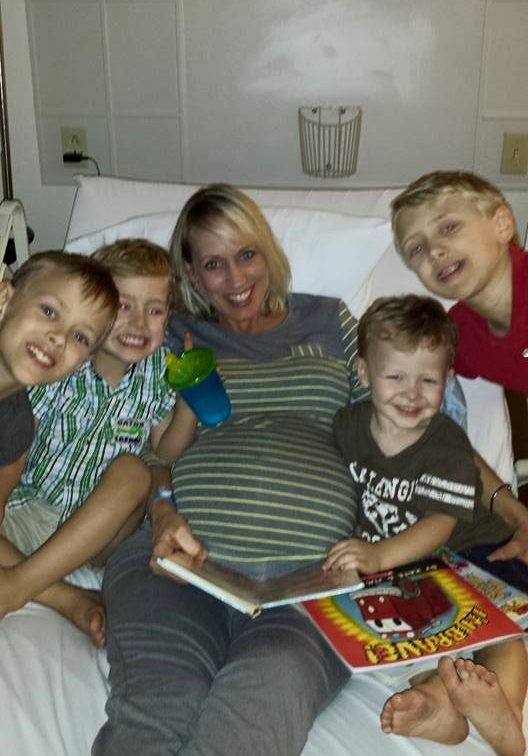 *It wasn’t our “normal” Thanksgiving, but we weren’t having a “normal” year anyway. When I looked around that room … whew. My sweet little life was right there and I was SO thankful for it, wherever we were celebrating.

I was so thankful for Jeff, for our boys, for our loving family and friends, for the beautiful friendship we’d formed with the biological parents of this sweet baby, for how far we had gotten (31 weeks!!) when just getting to 24 weeks was a miracle, and for the unbelievable care by my doctors and nurses while I was in that hospital.

I don’t want this, even for one minute, to sound like a pity party. I knew when I became a surrogate, my commitment to carry their child might result in extra doctor visits, bedrest or even a hospital stay because of the chance of multiples and the unknowns of an IVF pregnancy. Even with four “easy” pregnancies, I didn’t know how my body would react to the fifth.

So, yes, it was difficult emotionally to celebrate all these wonderful family holidays from a hospital bed, but it was also a crazy, beautiful experience to see my family compromise and make the best of the situation while I took care of this bambino. Teamwork! And we were completing. a. family. Sometimes that takes a little extra effort, and some unconventional celebrating! 🙂

Moore2Love
Dear Nurses, You Were My Angels
The gift I found while I cared for my child
advertisement

Moore2Love
Dear Nurses, You Were My Angels
The gift I found while I cared for my child