At My Weakest I'm at My Greatest

I was angry with myself the other day. I let a scary thought creep into my mind. It’s a thought that’s lived there before, but that was in the middle of my fight against postpartum depression. I had to put my sick daughter down in her crib and walk out of her room while holding back tears. I crumbled outside of her door as soon as I closed it. This was a scene that you could have seen in our last home outside of her old nursery just 14 months ago. This was not suppose to be happening again. I was better. Right?

You see, I’m pregnant and it’ll be exactly one year since I’ve been off of my anti-depressants by the time this next baby comes into our world. So, when that thought crept into my mind, I jumped to the worst-case scenario: my depression is back. I confided in my best friend and later that evening I told my husband about my fears of returning depression.

In that moment of temporary weakness, I felt stronger than other times during motherhood. I let the anger ooze from my pores and I cried and I shouted and I released every bit of frustration that had boiled to the surface as I replayed the day in my head.

But, that day I felt a new weakness that allowed me to come to a new realization only because of my ability to walk away from those dark thoughts and find ways to manage them.
That day, I was able to become an even greater mother than I am on my strongest days.
That day, I was able to place my daughter and husband first by knowing my limitations.
That day, I was able to acknowledge that I was an imperfect mother who has been entrusted with my specific husband and daughter who make our family as perfect as can be.
That day, I accepted that I am a great mom even in the middle of battles with depression and anxiety. 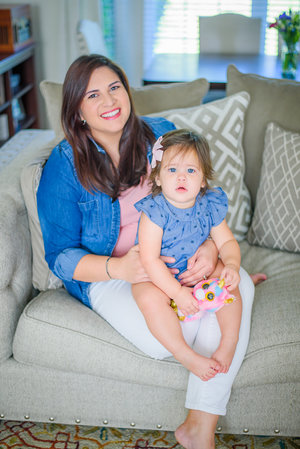 Ashley and her husband, Matthew currently live in St Louis with their daughter and their rescue pit bull. With another baby on the way in May of 2019, Ashley shares about her faith after three previous miscarriages and challenges like postpartum anxiety and depression. Through it all, she is excited about this journey called motherhood. On her personal blog, Out of Ash’s, Ashley explores faith, family and her life’s frivolous footnotes.

Finding Peace: Discovering the Beauty in My Unplanned Pregnancy
She's Growing Up, But She'll Always Be My Baby
I decided not to redshirt my kindergartner and I have no regrets
advertisement

Finding Peace: Discovering the Beauty in My Unplanned Pregnancy
She's Growing Up, But She'll Always Be My Baby
I decided not to redshirt my kindergartner and I have no regrets