“You need to prepare yourself.” “There’s no chance of survival. Let me see you back in two weeks to check and see if the fetus has passed.” “You’re young, you can try again.” “Delivering will put more stress than needed on her, just let her go.” These are things several specialists told me throughout my pregnancy. They echo in my head, but they don’t break me like they used to. Why? Because I’m looking at my fighter, my warrior, sleeping peacefully beside me who beat all odds placed against her. Let me tell you about this little miracle I’m proud to call my daughter. Here is her story. 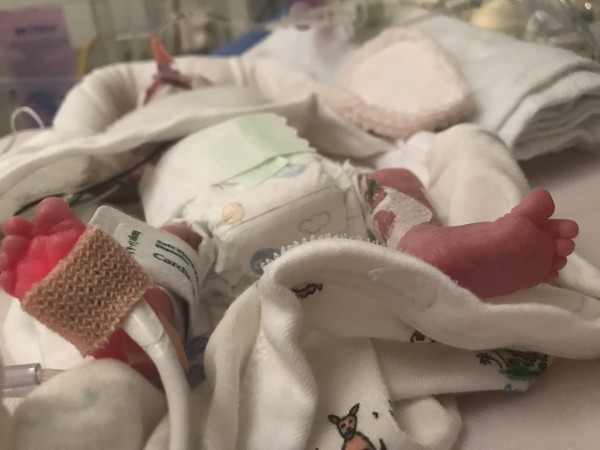 Whenever I became pregnant, it was a shock to everyone. I had been diagnosed with something called PCOS, Polycystic Ovarian Syndrome, which led to infertility. Whenever they discovered her existence, she was already 7 weeks gestational age. They did a sonogram to find a cyst, because there’s no way I could be pregnant. I had already had several negative pregnancy tests! To our surprise, there was a little heartbeat. That moment, changed everything.

At the 12 week check up, they found a blood clot in the uterus, a Subchrionic Hemmorage as they called it. I was put on bed rest and was monitored very closely. By 18 weeks, the blood clot was gone! The sonographer grew worried as she continued the anatomy scan. I knew she couldn’t say anything, but she didn’t have to. Her face said it all. My baby girl was 3 weeks behind on growth already and had very little amniotic fluid. From there, the OB referred us to a high risk specialist.

The first high risk specialist I seen said there was less than 20% chance of survival. He also continued to tell me I was young and healthy that I needed to try again. My heart fell to the floor. I wanted to scream and cry. I asked God, why would you bless us with this baby girl just to take her away. I grew angry. That anger soon turned to determination, I wasn’t giving up. I got a second opinion, unfortunately by this time there was less than 1 cm of amniotic fluid. Her growth continued to grow further behind. This second specialist told me the signs of miscarriage and sent me on my way. He told me to come back in a few weeks, to check for a heartbeat. I was beside myself.

At this point, I had almost given up. I cried, I screamed, I broke down, but when I was at my worst I ended up finding a little bit of faith. With every week that passed, I had a little more hope. Things kept getting worse, but I couldn’t give up. God chose me to be her mother for a reason. Adalee continued to grow further and further behind, the amniotic fluid rose but always fell. The specialist warned me at every appointment, 3 times a week, that the situation was not good and I needed to continue to prepare for the worst. At 26 weeks, I was informed by the specialist that the blood flow in the umbilical cord was compromised and that I would more than likely miscarry within the next 24 hours.

I’m not sure what changed in me that moment, but I gained strength I never felt before. It was time to fight. At this moment, she wasn’t even what they considered a viable weight. They told me I had a choice; they could do everything in their power to save her or do nothing. The doctor told me that I needed to let her go, delivery would be too much stress on her frail body and that it wouldn’t be humane to put her through it. I chose for them to do everything, I didn’t have to think twice. Something in my gut told me to fight for her, so that’s what I continued to do.

I was admitted into the hospital and put on hospital bed rest. They said I wouldn’t make it 72 hours without having to deliver. Three days turned into a week, and one week turned into three. There were many scares where her heart rate would fall below 50. They almost prepped me several times for a c section, but right as they started to, Adalee always brought her heart rate back up. When we were approaching 4 weeks in the hospital and I was 29 weeks pregnant, Adalee finally measured 16 ounces. To us, this was a big deal. The next day on the sonogram, Adalee was not moving at all and there was no measurable amniotic fluid. It was time.

On June 22, 2017, at 29 weeks 5 days gestational age, I gave birth to our daughter. The weight estimate was wrong. She wasn’t 16 ounces, but 14.5 ounces. She was the size of a 22 weeker. I remember them saying under a pound wasn’t viable, but thankfully they followed my wishes and did everything in their power to help her stay alive. I remember the first time I seen her, she had translucent skin and you could see every bone in her body along with the loops of her intestines. I couldn’t believe she was here fighting. I couldn’t believe a child the size of a can of Coke was living. Not many other people could either.

At 4 days old, Adalee was transferred to Children’s from our birth hospital. It was by far the scariest day of my life. From there they placed a central line. When they sedated her for the line placement, she couldn’t handle the sedation so they had to intubate her. The first time I seen her intubated, I broke. I never thought I would see so many wires and tubes attached to my baby girl. 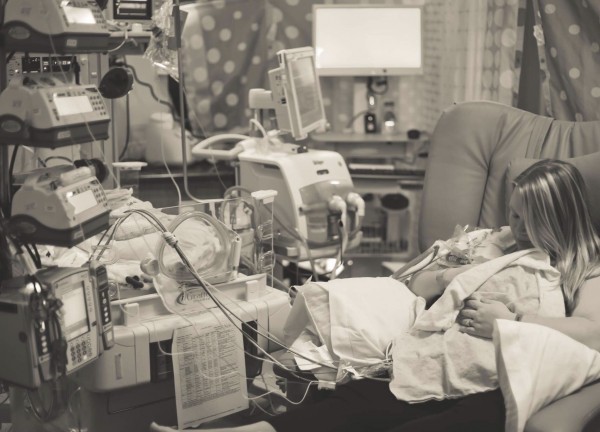 Days passed in the NICU slowly. She slowly gained weight, but it felt like an eternity before she even hit a pound. It was 3 weeks before we could hold her for the first time. Let me tell you, it was the best feeling in the world when we finally did. Throughout our stay, we knew many obsticles lay ahead. Somehow, what we were told would be a roller coaster ride, ended up being a slow uphill battle. We waited for a brain bleed diagnosis or her needing to have surgery on her bowels, but it never came. The doctors told us it was unheard of to see a baby born so small but not have any complications besides needing to grow. Our doctor called her a superstar.

Slowly, she gained the weight she needed. Before we knew it, she was 2 pounds and getting extubated. By getting extubated, I don’t mean her doctor removing her tube. Adalee had to be stubborn and have it her way. She decided to extubate herself. Her doctor didn’t want to extubate until she was at least 3 pounds, but Adalee had a different plan. She continued to grow and thrive. At 3 months old, Adalee had no more respiratory support! She was completely breathing on her own. Unfortunately, due to the fact that she did have respiratory support, she developed something called ROP, Retinopathy of Prematurity. Thankfully she didn’t have it severe, just a very mild case.

Days continued to pass in the NICU, it was now just a waiting game for her to get big enough to go home. Adalee got her nutrition and milk from a feeding tube until she drank from a bottle for the first time when she was 3 months old. Her nurses constantly had to keep replacing it. Our girl was quite handsy and always pulled out her tubes and pulled off her heart monitor. After 106 long days in the NICU, my baby girl went home. Adalee was 4 pounds 4 ounces at discharge. She was sent home on a feeding tube, which got removed within a few days after her coming home. She continued to stay on her heart monitor because she was so small, but it seemed as if she thrived more when she came home.

She has continued to beat every odd placed against her. All her doctors are very impressed with her progress. To say we were blessed with a miracle is an understatement. I can only hope for continued progress and growth for our little one as she continued to grow. Our 14.5 ounce baby girl, with less than a 20% chance of survival, lived.

To every nurse and doctor who had a part in taking care of our daughter that may be reading this, from the very bottom of my heart, thank you. I couldn’t ask for a better team to have taken care of our daughter. Leaving her was never easy, but it gave me comfort to know she was in the best hands she could possibly be. To the people who have supported us endlessly and prayed as much as we did, thank you for loving my daughter.

Adalee: "God is my refuge; noble one.” 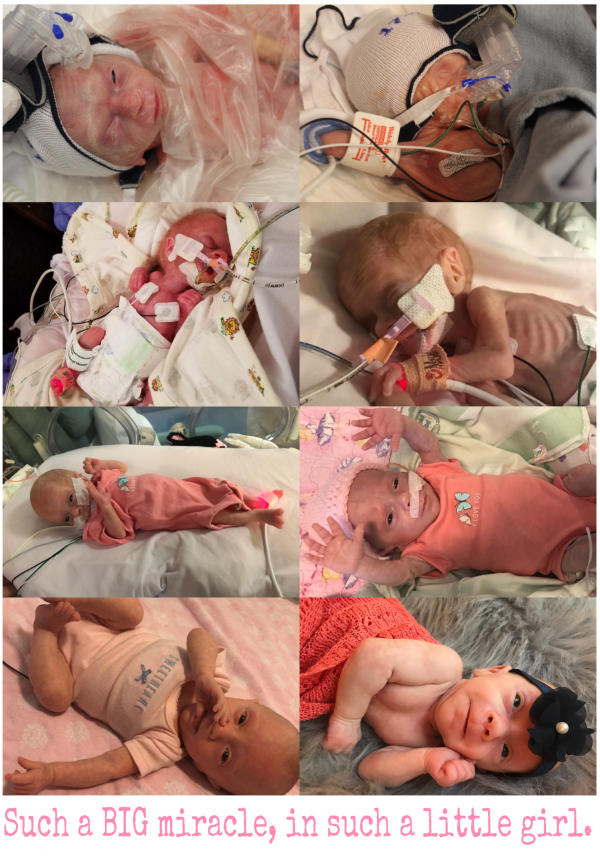 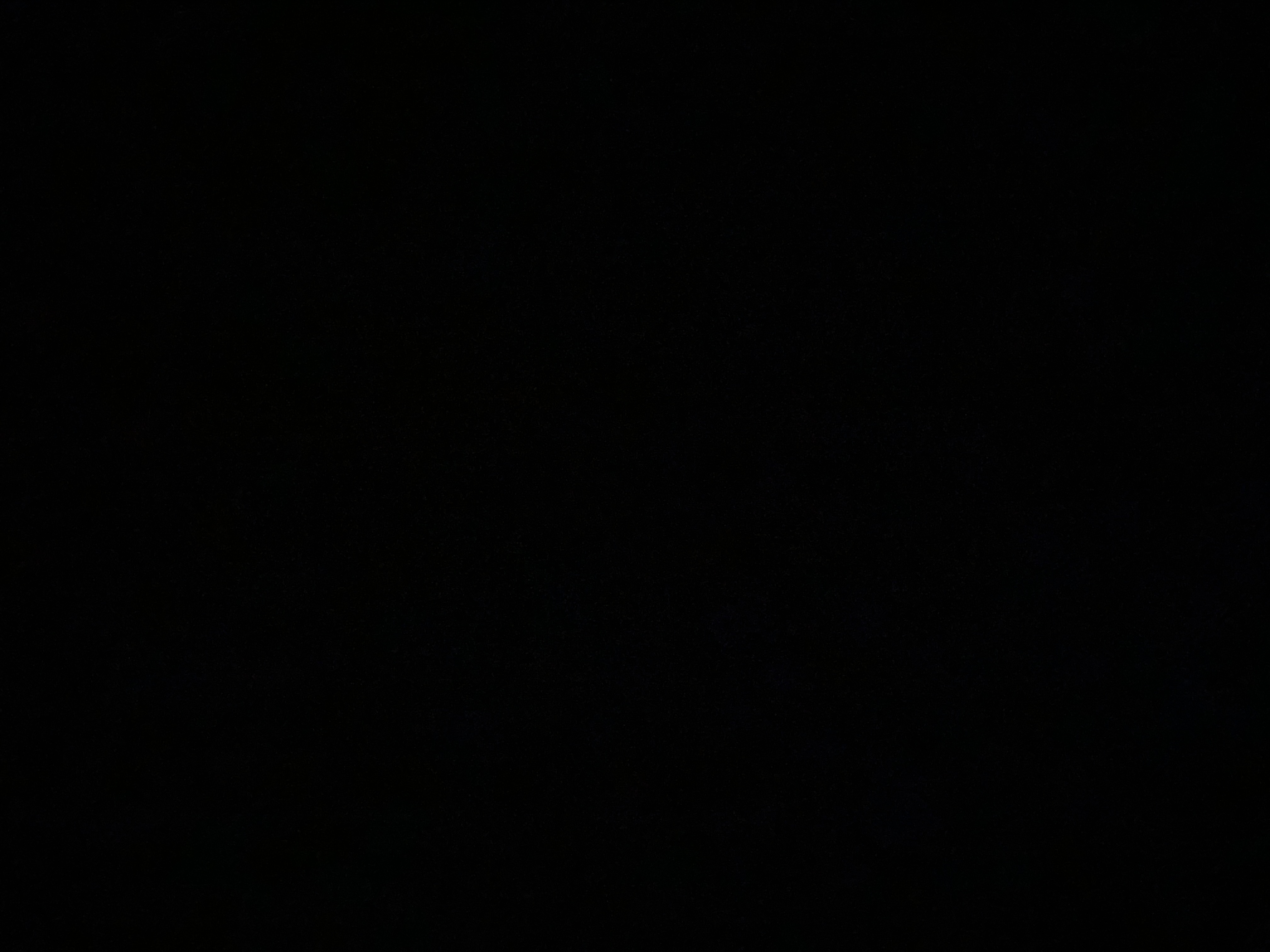