Published by Bianca LeRoux on November 6, 2017

Every story about the strength of the love between a mom and her son is true.

My son is the man of my dreams. He has deep brown eyes that turn golden or green, depending on his mood (just like mine); his hair is dark with sun-kissed highlights, like mine used to be. Our skin and freckles are the same color, so much so that he would rest his tiny hand on my chest while breastfeeding and I would marvel at how I could barely decipher where I ended and he began. 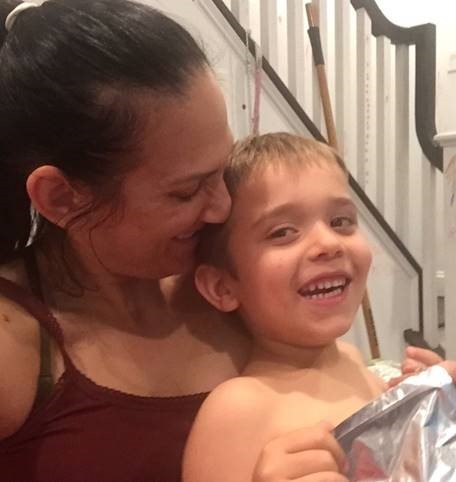 Casey’s entrance into the world was intense and theatrical, and I adored him immediately. My son popped out violently, one hand beside his head, screaming and pissing on the doctors and nurses. His thick hair stood straight up on top of his head in a perfect '80s-style Mohawk, and he kicked and shrieked angrily until he ran out of breath and turned purple. I could barely get a word out after his birth because I was laughing, and crying tears of joy. When I finally caught my breath, I said to my husband in between gasps, “He’s a rock star.” My little drama king continued to scream bloody murder until he was placed on my breast, where he remained for the next 15 months. Even after he weaned, I was still his “lovie” and source of comfort.

He preferred me to any other human on the planet, which I complained about but secretly loved. He wanted me and only me. He would scream if anyone else held him, cry if others sang to him, and would sleep only when he was on my chest. Initially, I chalked up his finicky nature to the fact that he was a momma’s boy, but as he grew, so did his temper when he didn’t get his way. Casey’s outbursts became a running joke to our friends and loved ones. I would share pictures of his “craziness” and “battiness” with captions such as “I wouldn’t let him play with the garbage,” or “I took away the fork he threw at me.” I poked fun at everything, but in reality I was at my wits’ end.

But even as I made light of the situation, I had doubts. Was he a brat and I couldn’t face it because he was my baby? I knew Casey was a tender and loving boy. He gave the best hugs and kisses. He looked at me like a goddess when I sang to him; his laugh made even the grumpiest old men at restaurants smile. Was I the only person who would ever witness his beautiful heart?

Over the years, his tactics changed, but Casey’s temper stayed the same. By the time he started school, his teachers noticed something that I had also been worried about: Casey seemed to have “sensory issues.” Each day when he walked into his classroom and greeted his teachers, he would hide behind me and twiddle his fingers until he found a toy he liked. He would cling to that toy for the rest of the day. His teachers informed me that some noises had him clutching his ears, and he would yell at the other kids to stop singing during music lessons. Transitioning from one activity to the next would throw him off-balance, so much so that he would scream and hit his teachers. They asked if he was like this at home, or if, maybe, he wasn’t ready for school. I searched my brain for a joke, some way to ease the tightness in my chest, but I had nothing. I told them this was my son, always, unless he was alone with me.

One day, after a particularly difficult drop-off, I sat in my car, fearing the worst. I made a list of everything the teachers had observed and the issues I had with him at home: the tantrums, his quick and sometimes violent temper, the difficulty getting him to do something as simple as getting dressed. I read everything I could online and asked questions in mom groups. With all the information I could gather on my own, I scheduled a check-up with the pediatrician and braced myself for answers. I knew that we would face head on whatever was going on with my little man and get him the help he needed, but I didn’t yet know what I was dealing with. The one piece of information I held onto that gave me hope was that he was very aware of how people felt around him and how his actions affected them. No matter what I learned about him that day, Casey showed compassion and tenderness to others. His beautiful heart counted for something. 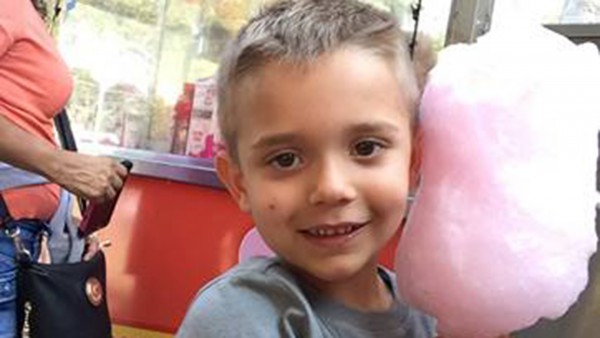 Our pediatrician, as politely as possible, dismissed my concerns. “He’s exactly like my oldest. I’m not saying he won’t always be a bit tough to deal with — trust me, he will be — but he’s fine, and you shouldn’t worry.”

I tucked her advice in the back of my brain and repeated it to myself as I dragged my son to see an ENT — not because I thought he could help me decipher what was going on with my son emotionally, but to address the six ear infections Casey had suffered over the winter.

After a routine check-up, which we survived with minimal screaming and fighting, we were sent down the hall to have his hearing tested. My stomach dropped as we walked into the tiny room and saw the dimly lit soundproof booth, but the technician just smiled, knelt down and calmly spoke to my son.

“Do you like animals?” she asked. Casey peaked out from behind my legs and nodded. “Good, because you get to hear them speak to you in these headphones. You’ll hear birds chirping, and dogs barking.”

“No, no sharks, but there might be some monkeys in there.” Still kneeling, she looked up at me and winked. As my son slipped the too-large headphones onto his little head and stepped into the booth, he excitedly rattled off information about sharks and dinosaurs.

He finished the test with no problems. As we stepped out of the booth, the technician asked me if Casey had a good ear for music. She could tell by how he related to the sounds in the headphones, even with the fluid in his ears, he had perfect hearing. 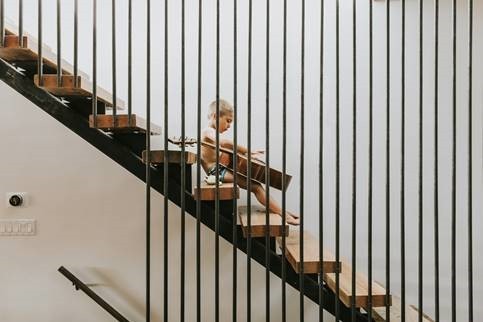 I don’t know why this was the piece of information that lifted the cloud over my heart, but somehow I could tell that this woman saw my boy at his core, and she understood him immediately. This set my spirit at ease, to see someone else able to connect with him so simply.

I learned a lot that day, but most importantly that Casey is not sick. He doesn't have a learning disability. Casey isn’t a jerk, he isn’t a brat, and he doesn’t need to “man up.” The only thing “wrong” with Casey is that his emotions are raw and on the surface. I love this about him; I think it’s something we lose as we grow up. A lot of what makes him a difficult child are traits that I know will make him an incredible man. He’s thoughtful and sensitive, but he’s not a pushover. He’s empathetic and takes people’s feelings to heart, especially the people he loves.

As he gets older, he’ll encounter people who will continue to tell him he’s “too sensitive”; he won’t be able to avoid them. He’ll gradually learn to hide all of this from the world. He’ll have to protect himself and his emotions from a society that doesn’t understand him. It is only in childhood, in his mother's arms, that he is safe enough to experience life the way he does now. So I will nurture my son for as long as I can. It won't be long before he hides this side of himself, even from me.

Through all of this, as I have grown to understand my son, I have fallen even more in love with him. He is now four years old and can fully articulate his feelings. He lets me know that his socks feel yucky when the seam is not in the right place. He doesn’t feel comfortable in certain clothes and wants to wear what he calls “ordinary clothes.” He doesn’t like the “noise” the other kids make during music time at school, but with that comes his beautiful heart. He is moved to tears by beautiful music; he paints because it makes him “feel calm.” He wakes me in the middle of the night to make sure I know he loves me.

One night last winter, Casey, my daughter, and I snuggled up on the sofa to watch a Christmas movie before bed. My son sat quietly, tucked into my side. As the music swelled over the credits and the TV glowed with Christmas lights, I heard quiet sniffles coming from the little man snuggled under my arm. “Buddy, what’s the matter?” I asked him.

I pulled him onto my lap so we could talk face-to-face. His mouth was turned down, his big brown eyes were dark and deep, and big tears rolled down his cheeks. “It’s so beautiful it makes me sad, and so, so happy.” As I held my little man in my arms, and he heaved all of his feelings into my chest, it was then that I knew I wouldn’t have to worry. I love that he is a drama king.

And I know, when he is ready, he will show his beautiful heart to the world.

Excerpted with permission from "The Ultimate Guide to Surviving Life with Boys," which is available at Amazon.com. Connect with writer Bianca Jamotte LeRoux via her Real Mommy Confessions Facebook page. 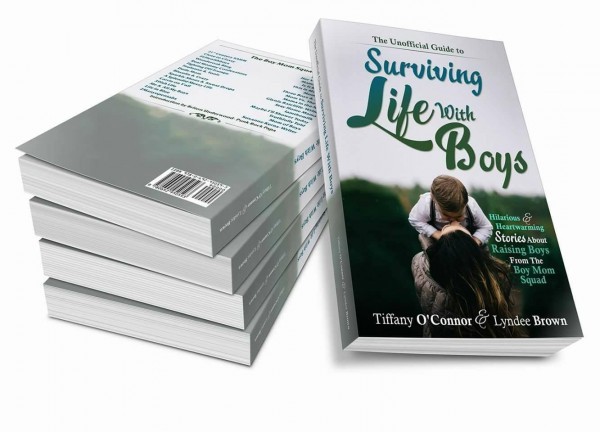 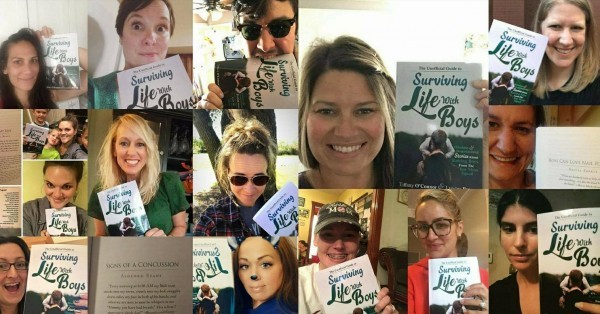 Differently Wired: The moment when school felt like feeding my son to sharks
Just take them to the courts or Why our sons need our time
Teaching Parents the Importance of Teachers
advertisement

Differently Wired: The moment when school felt like feeding my son to sharks
Just take them to the courts or Why our sons need our time
Teaching Parents the Importance of Teachers