Why Do People Stare?

Published by Carrie Cariello on September 16, 2015

You probably don’t remember me, but we crossed paths at the mall the other day. I was walking to my car with my kids, and you were also in the parking lot. You were shouting for your son to stop before he stepped into the crosswalk.

You looked at me and snapped, “Take a picture why don’t you, it will last longer!” And then you turned to the woman who was with you—was it your sister, maybe? She looked like she could be your sister. Anyway, you looked at her and said, “Do believe how she was staring at us?”

I turned away quickly. My face felt hot. I shuttled my five kids and their five syrupy slushies into our minivan and drove away. For the rest of the afternoon, I thought about you.

I know how it feels when people stare. People stare at us a lot. They stare because we have five kids, so when we walk into a restaurant or an airport or the grocery store, people tend to notice.

They also stare because my second son, Jack, has autism, and even though autism is technically a diagnosis of the mind and not a physical disability, he moves his body in a way that sets him apart. He jumps and grunts, he rubs his fingers down the side of his nose and wipes his hands down his pants a lot. Plus he clears his throat over and over. I’ve been told this is a verbal tic, but whatever it is, it gets people’s attention.

This summer people have stared at us even more because my 6-year old, Henry, broke his leg and he was in a wheelchair for a while. He had a long red cast up to his hip, and for some reason people noticed him a lot. In fact, a few days after he broke his leg we took him to something called RibFest right here in New Hampshire. Maybe you’ve heard of it—it’s when all these vendors line up and sell ribs and wings and stuff. They also have a lot of fun things for kids; face painting and bouncy houses and tall plastic slides.

Anyway, people really stared at us that day, not just because of the wheelchair and the cast and all, but because Henry insisted on having his face painted like the Joker from Batman, except the artist wasn’t very good and he just slathered all this white paint on his face and smeared red on his lips and gave him big, black slashes for eyebrows. Then my mother-in-law was very concerned that Henry was maybe too hot while we wheeled him around in the grass, so she stuck a big red umbrella to the wheelchair. Let me tell you, he looked scary, and people gaped.

People also stare at me because I look a lot like Sofia Vergara. You know, from Modern Family? It’s nearly uncanny, how much we look alike. My hair is just a little longer and shinier, and I’m actually thinner than she is, if you can believe it. Oh, the staring.

(That last one isn’t actually true.)

Ever since I was little, my mother told me not to stare. Staring is impolite. In fact, it’s downright rude. Everyone knows this. I tell my own kids not to stare; not to draw attention to other people by gawking or ogling.

And yet there I was, staring at you in the middle of the parking lot on a warm summer afternoon.

I think people stare for a few reasons. We stare because we’re curious, or maybe nervous, or lost in thought. We stare at the beautiful, the unusual, the exotic. We stare to admire, or to compare.

I first looked at you because I heard you call your son’s name, and you sounded distraught.

Then, a little louder.

He looked like he was about eleven or twelve, and something about him was familiar to me, even though I have never seen him before in my life.

I heard your slight panic and your weariness. It sounded as though you were reciting a well-rehearsed line in a familiar play.

I think, perhaps, you and I are acting in the same play; you and I are both the mother, and my son Jack is your Derek. Our scripts are very similar. See, I spend approximately nine-tenths of my life saying those very words, “Jack, wait!”

I often say, “Be careful, there’s a car coming.”

Some days, I wish I had a different script to read. I wish I said things like, “Wow! Did you see the way Jack caught that fly ball?”

Or, “Yes, Jack, of course you can invite some friends to sleep over tonight. Just don’t stay up too late again!”

Or even, “Just wait! One day you’ll have your own kids and then you’ll see!”

Instead, it’s “Here, take your melatonin before bed.”

See, since my son was born over eleven years ago, I have spent a lot of time warning, cautioning, anticipating, watching. And even though Jack is going into sixth grade and he stands almost as tall as I do, I still have to ask him to make eye contact and use his words and keep him from running into the street. I still have to hold his hand—or at least make sure he’s by my side—when we walk in a parking lot.

I noticed Derek had a frozen, dreamy smile, as if his mind was miles away and he was thinking about a joke or a funny story. His blankness was nearly angelic, ephemeral.

My son Jack has that look a lot. It simultaneously frustrates and delights me. It delights me because he doesn’t laugh or smile as much as most people, so it makes me happy when he does. But if frustrates me because I know, in that moment, he has unplugged from our world and is instead tuning into autism’s steady drone.

I didn’t mean to upset you when I stared. I am sorry.

I guess you could say I have made it my choice not to mind. If staring means someone understands a tiny bit more about autism, great. If it means they’ll reach out a hand and help me keep him from getting run over by a car, fantastic. If it helps build awareness, and relationships, and compassion, well, it’s worth every second of my own discomfort.

I realized as long as there is a boy who hops and jumps and grunts, who rubs his fingers down his face over and over and clears his throat again and again, there will be staring.

As long as there is autism, there will be staring. And if I don’t mind, hopefully he won’t mind, either.

I saw his beautiful smile and his white, even teeth. I saw the smooth skin of his cheek and his sparkling brown eyes.

I saw you right behind him, wearing a look of concern and apprehension and fatigue. In the flash of an instant, I felt as though I saw all of your hopes and your dreams and your love and your fight.

I saw that, regardless of autism, you are me and I am you, and at the end of the day we just want to make sure the Derek’s and Jack’s in our world don’t accidentally step off of the crosswalk and in front of a car. 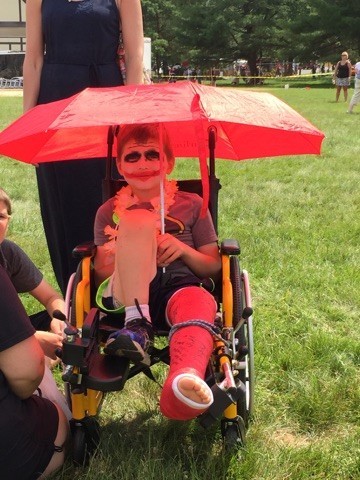 A Very Big Table for Autism
Just Say "Hi!"
I Found My Voice by Being His
advertisement

A Very Big Table for Autism
Just Say "Hi!"
I Found My Voice by Being His