Published by Jennifer Swartvagher on March 29, 2016

As the mom to eight kids, I have broken my share of parenting rules as my family grew. With my older children, nap time and bedtime was strictly enforced. Now, our busy schedules find us running from activity to activity. Sometimes, bedtime has long passed before my little ones are bathed and in pajamas. My older kids hold such a grudge over this discrepancy, constantly pointing out that they needed to be in bed before the sun went down.

Once Linus could climb out of his crib, nap time and bedtime became a struggle. There were nights I would put him in bed and sit in the doorway with only the light from my tablet to keep me company. Every time Linus stood up and straddled the crib rail with his chubby little legs, I would spring to action.

This went on for months -- months of stressful, sleepless nights.

Around this time, my oldest daughter was taking a video course at school. She was so inspired by my constant bedtime struggles that she decided to make Linus the star of her final project.

When Linus is running through the house at all hours of the night, I wish I could get back on that strict bedtime schedule again. Instead, with bleary eyes, I throw a blanket and pillow on the floor and pray he will fall asleep. Then, the challenge is moving him to his bed. My mother-in-law told me that my husband was the same way. She would simply put a blanket down and let him fall asleep. I figure if he survived, then Linus will be just fine.

I don't think my kids will ever see that 7:30 pm bedtime again. I am guilty of letting my little ones stay up to watch Dancing with the Stars.

As for Linus, most nights he stays in his bed, but for the sake of my sanity, I don't fight anymore. 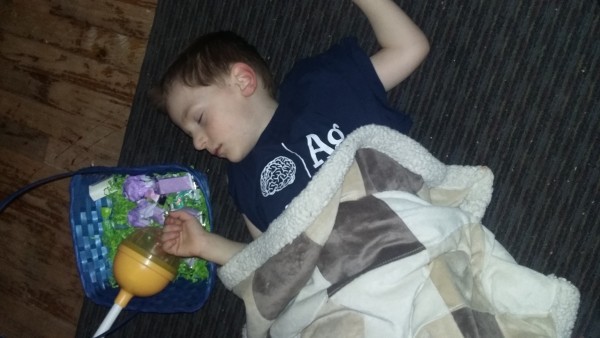 A Pediatrician's Guide to Sleep
When they just won't sleep
3 Must-know Tips for Better Sleep with a Newborn!
advertisement

A Pediatrician's Guide to Sleep
When they just won't sleep
3 Must-know Tips for Better Sleep with a Newborn!