Compassion Is In the Details

Published by Kelly Suellentrop on November 19, 2015

I am a crier. Just a few days ago, I found myself crying at that State Farm commercial where the guy keeps saying he's never going to do something (get married, have kids, drive a minivan...), then it cuts to a shot of him on the couch with his sleeping wife and two kids saying, "I'm never letting go." Those four words crawled right out of the television, down my throat, and wrestled themselves into nice fat lump for me to get all choked up on. That's right, people. I cried at a STATE FARM COMMERCIAL. You can add that to the very long list of culprits which have made me weepy, including standing ovations, wedding toasts, the song "Gracie" by Ben Folds, cute old men doing just about anything, and the graduation episode of Saved By the Bell. (Damn you, Mr. Belding! I always knew you loved Zack best.)

While I often poke fun at my over-emotional side, someone once told me it was simply a sign that I was a compassionate person...that I was easily moved by the plight of my fellow man and woman. I took the compliment and secretly patted myself on the back. Hell yeah, I'm compassionate! Score another point in getting to the end game of Heaven. Before long, Kelly Suellentrop and Mother Teresa will be practically synonymous.

Naturally, I must be an expert at raising compassionate and kind children, right? They do learn these things by example after all. I mean, witness me ugly cry while watching an episode of Parenthood. I'm feeling all the deep feels for the Bravermans, and my children are surely watching and learning.

But if I really look at my life, how often am I truly compassionate when it matters? And I'm not just talking about the big stuff. Let's face it: it doesn't always take a lot of effort to be compassionate on a grand scale, because we usually aren't doing it alone. When natural disasters hit, when telethons are begging to help sick children, or when tragedy is put on the world stage, we know the right move to make because we are people who are mostly good. We can shake our heads in sympathy with others, send our dollars to give some aid, and spread the word through organized movements. Those are all worthy things, and we should continue to do them. But in those situations, we can give surprisingly little of ourselves and still make an impact on a larger sense of global humanity. Compassion from afar is still compassion, but it is also a little like crying at the movie Sophie's Choice. We can easily be moved by something that does not actually require much sacrifice on our part, and then we get to move on.

The real question is how often do I show compassion at all those tiny little moments that make up a lifetime, not just for myself, but for the people with whom I interact? The times that involve me putting aside the ways I might be inconvenienced, annoyed, or hurt. The times that challenge my beliefs. The times that are not simply jumping on a bandwagon, but doing something that might only be noticed by the person on the receiving end...if even that. The times that actually require some type of sacrifice from me. Yeah, I'm not always so good at that.

Compassion is usually not on the table when my daughter has to suffer some terrible consequence for forgetting a school assignment because, geez, it's not my day to remember all your crap. I am not exactly compassionate when my son hurts himself doing something I repeatedly told him not to do, because I told you so. Compassion is scarce when I make sure someone knows I feel put out after reluctantly agreeing to help because, seriously, it is eating up my only free time this week to watch all my DVRed shows. I am not always compassionate towards the elderly driver going at a snail's pace in front of me because for the love of God, man, McDonald's stops serving breakfast in five minutes and my day really needs to be fueled by a bacon, egg and cheese biscuit with a large Diet Coke. Compassion was not what I expressed for Kanye West after he dissed Beck for winning Album of the Year at the Grammys earlier this year, because some people need to know when to just sit the 'eff down and let a man accept his award. And I am certainly not compassionate when my aging dog defecates on the carpet for the umpteenth time in a month, even though I know deep down she probably wouldn't do it if she could help it. (I say probably because there's always the small chance she really does take sick delight in watching my gag reflexes fire on overload, as I scoop up her poop with a plastic bag over my hand, then try not to use that specific hand for eating the rest of the day because I swear there is still the faint ghost smell of feces on it.)

Those things don't seem like life-changing moments. Does showing compassion towards people during such inconsequential incidents matter that much? Can't I just make up for it when I do my part to end world hunger or raise money for a school? Won't that translate enough compassion to others and, most importantly, to my children? 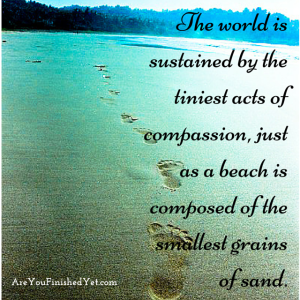 Here's the thing: Compassion is in the details.

I truly believe the world is sustained by the tiniest acts of compassion, just as a beach is composed of the smallest grains of sand.

Not only do those grains come together to create something greater than themselves, but they are transient, able to be carried elsewhere in plastic pails or between toes, to bring the beach to places it otherwise wouldn't be. Yet if the beach was simply made of one giant piece of sand, it would surely be impressive...but it could only exist in that one place. No one could bring a piece of the beach with them.

In the same way, grand scale compassion doesn't always trickle down to promote the more mundane tiny acts of compassion. Because it requires less self-sacrifice, we are left with a false sense that we have already done our part. It's like taking the "easy A" course. On the other hand, showing compassion in the details that tend to demand more of us not only makes a difference to those around us, but it goes on to breed compassion in the big picture. If I can suck it up and get over the inconvenience and raging assault to my delicate senses that comes with cleaning up some poo without grumbling at my dog that she's a nuisance, then donating a Thanksgiving meal to a homeless shelter is a piece of cake. If you've ever smelled dog poo, you know that first incident requires way more compassion.

I want my children to see me doing more of these small acts of compassion. The hard acts of compassion. I want them to watch me building my own beach. Then I will give them pails of their own grains of sand to take along wherever life leads, hoping they build castles and shorelines for themselves, one seemingly inconsequential moment of compassion at a time. And I will probably cry when they do...

...mostly because it will remind me of when Barbara Hershey dies in the movie Beaches. I mean, I am pretty compassionate after all.

Teaching Acts Of Kindness
The Gives and Takes of Being Humble
Compassion Blockers: What Gets in Your Way of Expressing Compassion in Motherhood?
advertisement

Teaching Acts Of Kindness
The Gives and Takes of Being Humble
Compassion Blockers: What Gets in Your Way of Expressing Compassion in Motherhood?