ZANDER ‘warrior’ ‘defender of men’: The Story of Fight, Strength and the Ultimate Will to Live

Our NICU journey continues to unfold as I sit here and write this. At 12:25am on October 12, 2017, at a mere 1lb 12oz, our son Zander was born. I started to have contractions the night before and knew something wasn’t right. I was a few days shy of 27 weeks. I called my mom and she said sometimes early contractions occur and they may just suggest I stay on bed rest for a while. My husband, Rob, rushed home from a dinner meeting and we went straight to the hospital. As the nurses and doctor were waiting for some test results, the doctor came in and gave us both a heads up that if this was an infection, we would definitely be delivering the baby…tonight. So, we had about 15 minutes to prepare ourselves for the worst-case scenario: delivering our first-born baby 3 months too soon. They ruled out a few things and determined that I had some sort of infection. The doctor knew we did not have enough time to determine what type of infection it was. Our baby was not moving during the ultrasound. The doctor and team made the quick and life-changing decision to immediately deliver via emergency c-section. They assembled a team within minutes and before I knew it I was laying on the table shivering uncontrollably, waiting for our boy to be delivered. “Is he out yet?” was all I remember saying. No cries were ever heard.

The nurse made a special arrangement for me to be wheeled into the NICU in my hospital bed so I could see Zander for the first time. The bed barely squeezed in the room where his poor little body lay within the isolette. Tears filled my eyes as I looked at my sweet baby and how sick he looked. My body was supposed to keep him safe and I felt I had not done my job.

A few hours later, we were both transferred to another hospital that cared for micro-preemies. Cultures from the lab testing came back that I had contracted Listeria-a rare but life-threatening food-borne illness. As a first time pregnant woman, and someone who was a worrier about EVERYTHING, I knew exactly what Listeria was. Throughout my pregnancy, not only did I know the foods that were dangerous to consume but I would always double check a food or ingredient that I wasn’t sure about. So, to hear that Listeria is what brought my baby into the world so early was devastating. I literally could not believe it. How was this possible? I couldn’t help but blame myself. Clearly it was something I had consumed and put into MY body. Not only was I dealing with a baby who was holding on by a thread but now I had to deal with the fact that I had contracted this infection.

Little did I know, that would be the least of our worries in the following two days. Rob and I were woken up at midnight by my nurse who said the NICU needed us down there right away. She wasn’t sure what was going on but all I kept asking was, “Is he dying, is he dying?” in fear of what I would be wheeled into. As we turned the corner, I could see nurses surrounding his isolette and the doctor saying, “one and two and one and two” as he was giving our 1lb 12oz baby chest compressions. Rob immediately went over to stand by the doctor and he calming told Rob what he was doing. He said Zander had some air around his heart but they had gotten it out. His heart rate dropped and compressions were started. I have no idea how long we were in there but I do remember looking to Rob who was shaking uncontrollably and saying “Rob, he could die, we could loose him right now.” We both prayed and asked God to help us, to help him. I heard a nurse say, “heart rate is coming up.” We were both able to breath.

We had a good morning and afternoon with Zander the next day. He seemed to be holding his own. I can’t quite recall the details leading up to our conversation, but at around 8:00pm the Sunday after Zander was born, the doctor asked to speak with us. He pulled us into one of the family rooms with the APRN and told us how sick Zander really was. His lungs were so very underdeveloped and there may be a time when there is nothing more they can do for him. What I recall most is the look on Rob’s face. He dropped to the floor and rested his head on my lap as I sat in the wheelchair. We cried together, looking into each other’s eyes as we held each other’s faces. We tried to make sense of it all. Convincing ourselves that if this was meant to be than there was a reason for it. If he was that sick, and having so much difficulty breathing, we didn’t want him to suffer. In those moments of life and death, you really believe and trust in what the professionals are saying. But sometimes God has a different plan and surprises us all.

I will never forget that night. Surrounded by our family, we waiting in preparation that we would loose him. I felt like I couldn’t breath and had the worst headache of my life. My mom stood behind me, rubbing my head and trying to provide some relief to me as she stood there helplessly waiting too. I can’t begin to imagine what that scene looked like. I felt like death, I was prepared to watch death happen right before my eyes. The doctor said there was one more thing he could try in hopes to get Zander's blood gas levels in control-this was something he said was unconventional but boy am I glad he was feeling unconventional that night.

Zander quickly responded to the medication given and the top of his isolette slowly lowered. The doctor came over to us, in amazement that Zander actually responded and his levels looked better. Two days in a row of pure horror. Our little Warrior continues to fight his battle to stay alive. He is now a month old and we are so grateful we can even utter those words. The ups and downs of being in the NICU continue, but we are hopeful and thank God everyday for giving us another minute, hour and day with Zander. We pray that one day, he will come home with us and we will be able to enjoy life with him here.

To my little Zander, my sweet pea: You have impacted more people that I even know in the sort time you have been living. What a strong little soul you are. Keep on fighting your best fight. Mommy and Daddy love you. 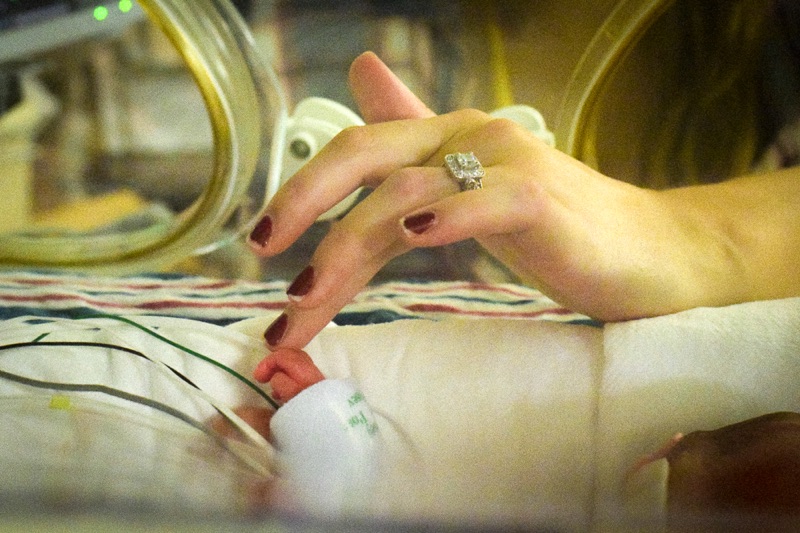