Published by Tales of an Educated Debutante on July 11, 2017

Two words that have been spoken time and time again in our house, but never with such emphasis and wistful hope as with our Amos. The daddy in our family, like so many, rough houses and wrestles, hangs people upside down by their ankles and swings them in towels, damp from a bath. My husband has been wooing the boy named Amos for quite a while now, almost four years. I've watched and been amazed and a bit dumbfounded by his persistent efforts. Would I be able to persevere like he has? I'm not sure, Amos has always been mine, he nursed from my breast and said mama at just ten months old. A mama's boy, but this summer, a daddy's convert.

I've been watching the unfolding of the relationship where one has pursued and the other has been impervious to the advances. Time and time again, the aloofness of Amos has inspired my brow to furrow as I silently willed my son to please love him back. To love a child who never has called your name is the type of love that moves mountains and in this case, a father's love inspired his third son, a fourth child, the towheaded sprite with autism to concede defeat. It was ever so slight, the blue eyes sparkled and the little self wriggled with delightful anticipation for the man who would soon raise his arms and reach out to tickle while saying, "You, boy," in quite a macabre voice.

And now, it is the boy who catches a glimpse of his daddy and he is the one that growls the guttural words which would be nonsensical to anyone else other than us. "You, boy," the small fellow teases and the daddy pounces, again and again. Oh, I've been awash in wondrous relief and love for the boy who, as my husband said, "finally likes me." He does, he likes him and the success of a father's efforts are apparent on two of the faces that I love most in the world. I'm reminded that I chose wisely too and I'm thankful for the love that prevails and the father and son whose relationship is a treasure, a journey just beginning and I imagine its' path shall be breathtaking. 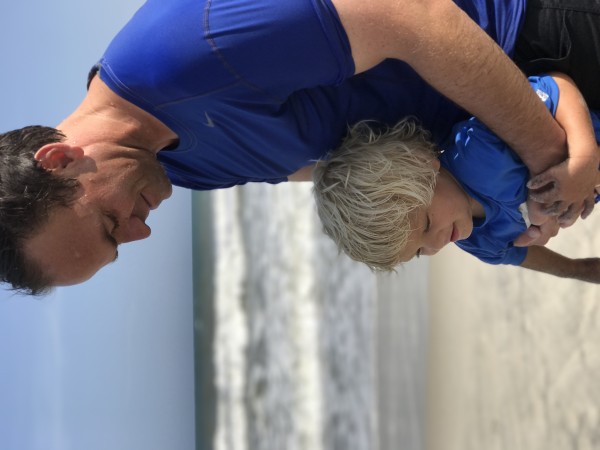