When you've got multiple kids close in age, it's impossible to not feel like you're failing

Published by Danielle Sherman-Lazar on August 8, 2019

I'm a mom of multiple kids close in age is synonymous with I'm a mom that feels like she falls short.

We travel as a pack.

The pack mentality is to stick together — and we do. Even when we aren’t in the best of moods, even when one of us holds the pack back.

But there is one thing missing because of that. My kids don’t get enough one-on-one time. 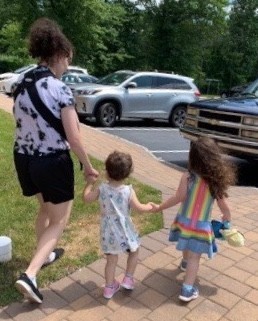 They all need me.

And I try to balance my time between them, but some days one may need more of me than the others. I'm used on a who needs me most basis.

And a lot of the time I fall short.

Like tonight at bedtime, I couldn't get the baby to sleep. She was crying, red in the face with anger, so I quickly threw the two older ones into bed, no stories, no goodnight kisses. It was a tuck and run.

The baby needed me the most.

So, with the rest, I fell short.

My oldest every night asks, "Can you lay with me for five more minutes?"

And most nights I have to say no because I have to tuck in my two-year-old, who requires her own set of bedtime routines before I leave the room-- and then it's time to rock the baby to sleep.

and when I do, I feel small inside.

And they’re all going through something right now because of how close in age they are:

My three-year-old regressed to a diaper when the baby was born because being a baby is on-trend in my house. At least when it comes to the hierarchy of attention — babies tend to get the most — and my oldest daughter took notice.

And my two-year-old doesn't want to be associated with me when I'm holding the baby.

They all act out to get that one-on-one time they crave.

So, I fall short again.

But most of the time, I don’t:

There are times when I admire them playing together or holding each other's hands. They have built-in best friends, since they are close in age they gravitate toward one another-- and it’s beautiful to watch.

I also know what I'm doing now as a parent. I have this changing diaper, waking up a lot thing down pat. I have been in it since 2016 — and it's just normal life for me now.

I have learned not to try to control every situation. For a type-A personality, going with the flow doesn't come naturally — but I've learned to make decisions on the whim.

And I cherish the one-on-one time I get. Instead of being distracted by the millions of reasons parents get sidetracked, I’m taking in the moments and enjoying them entirely, because I really treasure that time just us.

Being a mom is a tall order, so it's easy to feel like you're falling short — but my children's hearts will never sense or feel that. They're not only growing up in this crazy world with their parents, but side-by-side with the love of each other.

Bedtime Saves the Day When it Comes to Babies and Toddlers
Owning my wear and tear
Surviving 2: Your guide to second-round postpartum sanity
advertisement

Bedtime Saves the Day When it Comes to Babies and Toddlers
Owning my wear and tear
Surviving 2: Your guide to second-round postpartum sanity