Sometimes fear is a part of bravery: A lesson from my daughter's first day of school

The morning of my daughter, Lorelei’s, first day of school was a blur of preparation — packing her lunch, the perfect first-day outfit, pristine white sandals with small flowers, making sure her book bag had all of the required kindergarten school supplies.

Her brother was only four months old and had arrived into this world two months early. I was lost in a foggy world of sleep deprivation and emotional numbing and not feeling particularly sentimental as I brushed the tangles out of her hair. I wanted to get her off to school so I could join the baby in a morning nap. After all, she had been in full time daycare since she was three months old, what did I have to be all verklempt about? 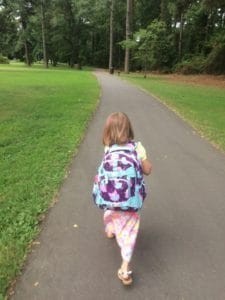 My first born is a study in contrasts – she is both shy and outgoing, anxious and sure, kind and selfish. We walked as a family to her new school that late August morning, infant strapped to my chest, Lorelei with her arms outstretched between her dad and me. As we bridged the final distance between our neighborhood park and the school she lengthened her stride.

Her posture and pace exuded a new level of, “I’ve got this, mom.”

I wasn’t sure I had it, whatever “it” was. I hated school and the smell of a gymnasium was enough to wind my anxiety into a tight ball behind my breastbone.

She walked with purpose and confidence, appearing so big, so ready. I saw flashes of her kindergarten graduation, and then of driving her to college. She seemed so brave, walking into this big new unknown with such grace. I was actually envious of my five-year-old daughter. 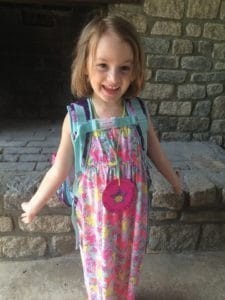 She owned this walk to school.

We crossed the threshold to her classroom and her bravery crumbled. Like a light switch her shoulders sank and she grabbed my legs, hiding behind me. I could see the desperation and fear in her eyes as she wrapped her arms around me. I thought I would need to recruit help to peel her body away from mine.

As her teacher gently led her to a tiny chair Lorelei looked so small and so scared. She glanced back at me, making eye contact as I backed out of the classroom. A tentative and uncertain smile didn’t quite reach those eyes.

But she sat. She sat and she made it through the day one minute at a time. When I picked her up at the end of the day she wore a real smile, and an actual badge of courage.

As we walked back to our house I was struck by the truth of something I have told her all along.

“Bravery is being scared of something you need to do, and doing it anyhow.”

She wasn’t more or less brave when she was taking the lead than when she sat crying in her chair.

In a few weeks she will be starting the first grade. I’m sure there will be moments where the doubt clouds her confidence and where she worries about things she can’t control. I’ll let her take the lead when she wants and cry when she needs to. I’ll walk her into the school on that first day and pick her up each day after, even when I want to run far away from the smells and memories that school brings.

We will be brave together. 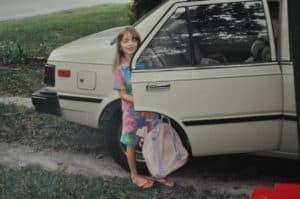 My own first day of school, 32 years ago

This essay was originally published in 2016 on Reality Moms.

You've Got This!
The Kindergarten Debate: Is My Child Ready Or Should She Wait A Year?
Welcome To Kindergarten
advertisement

You've Got This!
The Kindergarten Debate: Is My Child Ready Or Should She Wait A Year?
Welcome To Kindergarten