My 5-year-old will not remember seeing David Wright play.

He will be at David’s farewell game on Saturday, along with me and my husband and our older son, and a full stadium of Mets fans. Both boys will wear their #5 jerseys to the game. But neither of our sons will know David Wright the way we knew him – the easy grace with which he played third base, fielding balls hit like bullets and throwing to first like he was passing the salt at the dinner table. They will only know the thrill of a clutch David Wright home run, that fantastic Captain America swing, in the tiny boxes of YouTube video replays.

How to explain, then, that David was always larger than life?

Even as he shrunk in size, like very old people do, his muscles wasting away so that he looked like a skinny 18-year-old rookie in his Port St. Lucie uniform, he was still the Captain.

My 5-year-old won’t remember the game – you know how memory is at age 5. He might remember the way the beer man shouted, or the taste of cotton candy, or the subway ride home. But we shelled out for the tickets anyway, because there are some things we do as a family, and Mets baseball is one of them. He wears #5 on his jersey for his Saturday baseball league, where they don't keep score and everyone wins. One day he'll learn that grown-up life isn't like that, and both life and baseball can break your heart. But for now he has his innocence, and baseball is just fun. And one day he’ll be able to say he was here, for David’s last game. He’ll be able to tell his children. And that might remind him of the days when he played with David's number on his back. 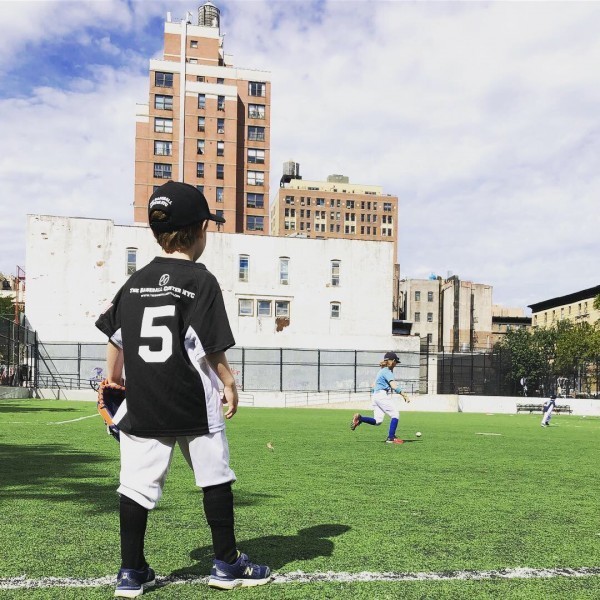 People sometimes ask, “How did you become a Mets fan?” Sometimes Mets fans ask each other this, as if by asking we’ll be able to identify some ancient slight to an old gypsy woman that led to a curse that could somehow be lifted, severing our hearts’ connection to a team that often seems intent devising new ways to hurt us. The answer, though, is more pedestrian. I’m a Mets fan because my husband is a Mets fan; I entered the marriage with a general fondness toward baseball but no strong allegiances. I tolerated, and rolled my eyes in wifely fashion, when he insisted on buying the expanded cable packages in every city we lived in just so we could watch every Mets game. But the nightly rhythms of baseball have a way of weaving into your life, so you think that Gary, Keith and Ron are just background noise on summer nights, and then one night you realize you’re not reading your magazine anymore, you’re breathlessly awaiting the next pitch on a 3-2 count and you know exactly when Keith is going to call for the cheddar or sigh heavily when the infielder bobbles a routine ground ball.

Then one day someone innocently mentions the Cy Young and you find yourself giving an impassioned presentation, with footnotes, on ERA versus W-L record as a reliable indicator of pitching excellence, and suddenly you realize: This isn’t my husband’s team anymore. This is my team. Not his family’s team, our family’s team.

My sons never met Papa Joe, my husband’s grandfather, but he is the reason we are Mets fans. Papa Joe raised my father-in-law in Brooklyn, and everyone in Brooklyn rooted for the Dodgers, and would never ever root for the Yankees. I imagine if Papa Joe saw our lives now, he might not understand a lot of things: what we do for work (online!), how we worship, even the roles in our marriage or the way we talk to the kids ("positive discipline"? what in tarnation is that?). But he would understand how we root for the Mets. Most things change, but some things don't.

My sons never met my grandfather, either. My mom grew up in Baltimore, and for a while my grandpa worked a second job as an usher at Memorial Stadium. This was back when the Orioles played baseball in a concrete slab monstrosity built for football, not an architecturally beautiful cathedral to the golden age of baseball. When she was about 11, my mom and her younger brother would walk the two miles to the stadium and then, a few innings into the game after the crowds cleared out, my grandfather and his fellow ushers would sneak them in through a window. One generation pulled the next into the house of baseball. Grandpa would tell them to find empty seats, and move if someone with tickets showed up. She remembers those afternoons being so happy.

So my sons never knew Papa Joe or Grandpa Ed, and they’ll never know David Wright like I do. But they know baseball. What's more, it has been a lousy, no-good, horrible season for the Mets. What else is new, a more seasoned fan might say.

And yet: When we go to the stadium for games, we usually stop in the little Mets “Hall of Fame” before taking the 7 train home. Every time, my younger son goes straight to the replica statue of Casey Stengel, the first manager of the Mets. It’s a funny little statue – little, literally, as it stands about three and a half feet tall. The perfect height to be the confidante of a little boy (he had his birthday over the season, and grew several inches, but still sees eye-to-eye with Casey). He jogs straight over to Casey and starts talking to him. I’m never close enough to catch what he says, but it’s definitely a conversation. One-sided, yes, but my son is animatedly telling Casey something important. Baseball talk, I figure. 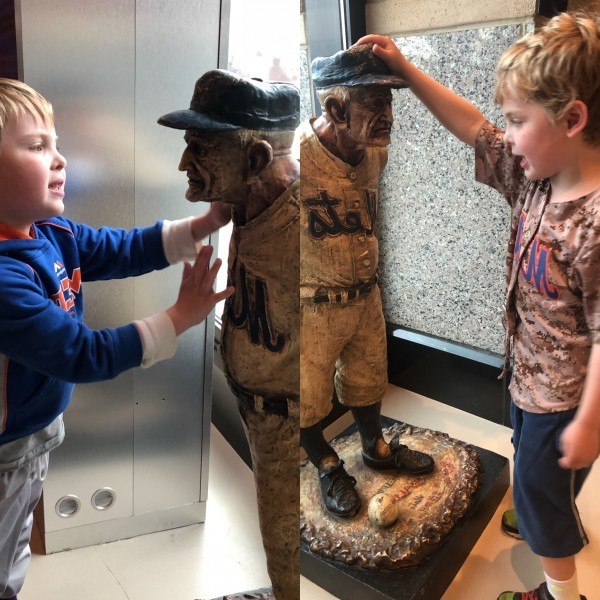 My boys will never know David Wright the way we do; if they inherit their father’s love of baseball statistics, they’ll know everything about his batting average and his defensive stats. I have no patience for baseball statistics, so what they hear from me will be boiled down to the shape of a bedtime story. Once upon a time there was a man who loved baseball. He wanted to play forever, but his body broke down. He kept trying to get stronger and play, even though some days it was like the Little Mermaid, the hardcore, Hans Christian Andersen version, not the Disney one. Some days he was in such pain it felt like he was walking on shards of glass, but he wouldn’t stop playing, because he would do anything for his love.

This is the part in the Disney version where David would come back and hit the World Series-winning home run and be a hero forever. Nope. Not for the Mets. But this is the most important part of the story, the part I will retell until my children roll their eyes (“There goes mom again with her David Wright story”). The glory of his David Wright's career lies not in victory, but in his struggle. Yes, he was an MVP and he might have been a Hall of Famer, if he hadn't got hurt. But he did. Life hurts, and that’s where the beauty is. That’s where the grace is. His willingness to keep trying, to give the game he loved everything he had, to never, ever, ever give up – that is his victory, even though it might look like defeat. That’s what makes him a hero. That's what I want my children to remember.

So we’ll go to David Wright’s last game, as a family. We’ll have another story to tell. Ultimately that’s what baseball is to us, and to so many people: A story we tell across the generations, Papa Joe and Grandpa Ed to my sons. It's heartbreak, but also hope. It’s a memory of one perfect night, a home run, the smell of cotton candy, a boy who loved baseball. It’s a 5-year-old whispering his secrets, a little boy's hopes and dreams, into Casey Stengel’s ear.

We won’t forget you, David Wright.

My Son's Dad, Our Team Captain
My Family is Like Everyone Else's, Except When it's Not
Teen Anxiety: Teens Need to Know They are “More than This”
advertisement

My Son's Dad, Our Team Captain
My Family is Like Everyone Else's, Except When it's Not
Teen Anxiety: Teens Need to Know They are “More than This”