My Son's Dad, Our Team Captain

I was supposed to be a boy. I had two older sisters, and a dad who yearned for a son so much he actually brought a football to the hospital the day I was born. He had so many sporty things to teach a son, all his stories about growing up with a dad who played major league baseball, about shagging fly balls at Tiger Stadium during batting practice, and how the best way to fall asleep at night is while listening to a ball game on the radio. Turns out, I was the son he never had, just in pink ballet tights and pigtails. I hung onto his every word, and when I wasn’t twirling around the ballet barre I was listening to his sports stories, watching sports on TV, and soaking in those late night ball games on the radio. By age 10 I could tell you the difference between a fork ball and a slider. I knew what off sides looked like, what club to pull out on a dog leg left with 150 yards to the hole, and what a double double was. I could score a baseball game on paper, and knew 6-4-3 wasn’t about math, it was about turning two. I was brought up reading the sports pages, and watching all the games, all the time. And it was awesome.

My dad died young. He was 58. I had two sons at the time, both toddlers. I was angry, and felt denied of all the things he would have been able to give my sons. Mostly, all the great sports stories and wisdom. Who would do this now? My anger and grief blinded me to the fact the perfect man for that job just happened to be the one I married. As years went by and I had two more sons, my husband, an all around athletic guy himself, took over. He became an amazing sports dad to our four boys. And he did it better than I ever thought he could. 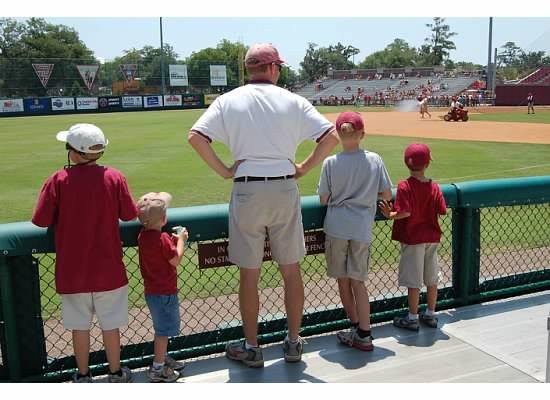 He has coached t-ball, flag football, girl’s softball, and golf. Tennis, basketball, baseball, and soccer. And after all these years, all the games, matches, hoops, drills, goals, aces, bunkers, shanks, touchdowns, homeruns, and slam dunks, he will humbly tell you, “It’s my favorite thing to do. Teaching kids sports, seeing them do what they didn’t think possible. Teaching them about the game of life.”

In many ways, my son’s dad (and all the sports dads out there) when teaching some of the simple values and rules of games, are actually teaching the values and lessons of real life. Even sports cliches are metaphors for life. Things like- there's no “I” in team. It ain’t over ’til it’s over. You can feel the momentum swinging. Gut check time. It’s yours to lose. You just need to execute. Sometimes the dark horse wins. You control your own destiny. You can still hold your head high. You can always find a way to win. It’s been a great ride. Always shake hands. You couldn’t have written a better script. We’ll just have to put this loss behind us. You’re not out of it yet. Never give up. 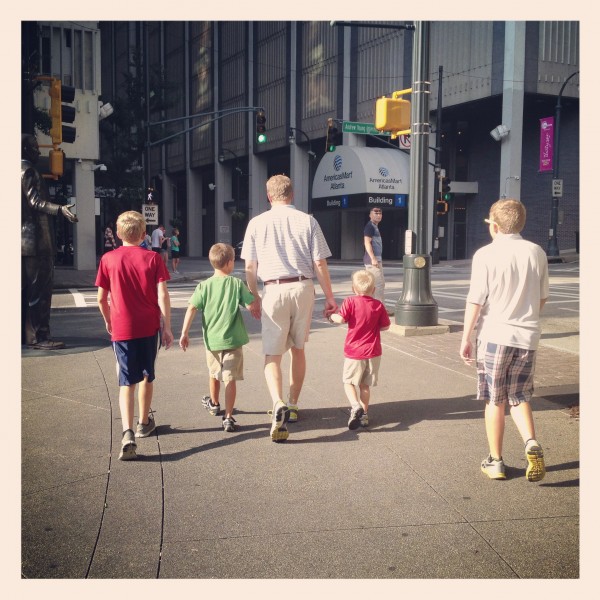 My son’s ‘sports dad’ has always walked 10-15 feet ahead of me. He is tall, with legs that seem to start at my shoulders, and his stride naturally carrying him ahead of me. It has become a joke between us, and he tells me his father was the same way, walking quick, determined, focused, while his mom lagged behind digesting her surroundings, noticing things, observing, simply strolling. When our boys came along, they followed suit behind him, always skipping, running, and jumping to catch up with “daddy,” while I lagged behind saddled with a diaper bag or pushing an empty stroller. One day, from 10 feet behind my ‘team,’ I looked up and rather than becoming annoyed they had left me, I became grateful. And then I snapped a picture. “Yes.” I thought. “Yes, follow HIM. Do what HE does. Strive to be HIM. He is your team captain. Walk with a great man and father who is tenderhearted, generous, devoted and giving. Learn from your dad, who is your first true coach, and a man who is forever calm, balanced, and even tempered. Listen to your mom’s husband, her co-captain, who makes her cry with laughter on daily basis, who still opens doors, holds her hand, and tells her every day life gets better, as long as we’re together. Follow a team leader who carries his ‘team kids,’ even when they are at their weariest, and when they feel the most defeated, reassuring them they are winners, and they can do it. That WE can do this. Hold onto the hands of an ally who is fiercely loyal, chilvarous, confidant, yet humble. Grow up learning life lessons from your first real team captain, your dad. And when the game of life throws all of its curveballs, penalties, bad calls, and overtimes at you, remember the lessons he taught you. That no matter what the final score says, you are a winner- you can be a winner- a winner to all the people it matters to most, your own family.

And by far, fatherhood is the best game of all to win. 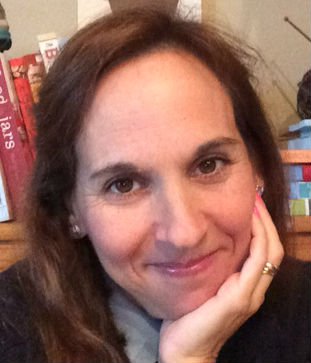 Freelance writer, bibliophile. Find my writing all over the internet, but my work mostly on the dinner table.