Twinmom Meltdowns – It happens to the best of us 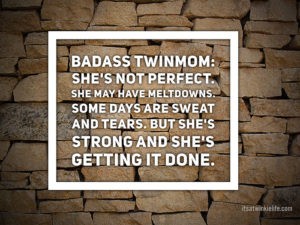 I’m going to go on a limb here and assume most Twinmoms have meltdowns. Hopefully, I’m not sitting on this limb all by myself.

Looking back, some of my meltdowns might have been avoided but a lot of them were the result of stress from taking care of two at the same time, being a first time mom, and well I’m just human.

Most days, I think I’m rocking this motherhood thing considering i have twins, they are my first children, and I had them very late in life. Other days, I completely lose my shit.

Having twins makes you realize you’re stronger than you ever thought possible. For some Twinmoms, that realization is even more acute because they have other children besides their twins. I’m amazed at these mamas who are taking care of so many. It makes me wonder how in the world they handle 3 or 4 or 6 kids going bonkers. Some days I can barely manage 2 losing their shit at the same time!

While it’s made me stronger, having twins has also made me realize I’ve got work to do when it comes to my own behaviors. Looking in the mirror isn’t easy, and I’m not talking about the physical kind either (although that one is pretty hard too). Motherhood along with its joys has brought to light my character flaws. It has shined a light so bright on those, I might be going blind. Well, old age might have something to do with it too.

In one of my previous posts I mentioned my impatience and tendency to be a control freak. And we all know parenthood means a lack of control, which means I’ve had to work extra hard to fix these flaws in myself.

Some of my online mommy friends (typically the ones who just have singletons) have said the opposite, that motherhood has made them infinitely patient. I am waiting for this magical moment to happen. While my lack of patience is better than what it was, I can’t say I’ve reached an indestructible zen-like mindset just yet.

I have cringe worthy moments I wish I could take back. But like anything else in life, I have taken them in and tried to learn from them. I share these with you to let you know you are not alone if you’re going through the same thing. I also share these with you in hopes I’m not the only one who’s gone cuckoo at times.

Here are my worst mommy meltdowns, and the lessons I’ve learned from them:

My worst meltdowns happened during the morning breastfeeding sessions when my twins were a little older, around 6 or 7 months old I think. Since they were too big to tandem feed anymore, I had to sit there and listen to one baby cry while breastfeeding the other one. And by crying, I mean high pitch, continuous screeching, for 15 long godforsaken minutes. I remember sitting there thinking to myself “ignore it, ignore it, tune it out, tune it out” chanting this mantra in my head, but man after a while, the screeching would get to me, and like an a**hole I would yell “stop screaming!” Yep, I was screaming stop screaming. Here I was telling my kids they couldn’t scream, but I could. Yeah, not my proudest moments. It really took a long time for me not to react during those cries.

I could sit here and beat myself up about it, and believe me I have, but I think at the end of the day, I’ve made up plenty for those meltdowns. After all, I went on to breastfeed them until they were 20 months old.

My twins having a meltdown at the same time took the longest to get used to. One specific incident brought on World War III level double meltdowns (at least what I would imagine World War III to be like). When my twins were 12 months old, I had decided I would start the breastfeeding weaning process and I had the brilliant idea to start with the morning feeding session. Major. Bad. Idea.

That horrific morning I went into their room, grabbed the both of them and brought them down to drop them off in the living room so I could go prepare their cups of milk. Another bad idea in this not so brilliant plan of mine, to go in empty handed.

When I grabbed the both of them, at first they looked at me perplexed. As soon as I got downstairs and tried to plop them on the couch so I could go get their milk warmed up, all hell broke loose. Twinkies lost. Their. Shit. They started screaming and crying, and the more I tried to calm them down, the harder they would scream and cry especially when they realized no boob was coming out.

Now any sane person would have aborted the breastfeeding weaning mission right there and then. No. Not this crazy woman. No I decided I would raise my voice instead and make my Twinkies cry even more. The more they cried, the worse I felt about my decision to start the weaning process. The guilt got so bad I started to cry right along side them. I couldn’t believe I had yelled at them when they were so upset and rightly so. I decided to hell with weaning, obviously no one was ready for it.

Lesson: Never ever go in empty ended if you’re going to start weaning your twins off of breastfeeding, and never ever start with the morning session. I eventually learned that the easiest feeding sessions to stop were the nap time ones, and just giving them a warm cup of milk instead to ease them into the weaning process.

I don’t know about you, but I absolutely hated this phase. I remember one specific mommy meltdown that happened when we were deep in the solid foods introduction stage. I remember feeling extremely frustrated back then. I would cook up meals only to have my twins refuse them, and I hated cooking (still do)! I was worried I was failing my Twinkies and that they were going to starve. After a while, I would give up and give them store bought baby food instead. I felt like the worst parent in the world.

One day, as I was trying to open one of these baby food packages, my twins started fussing and screeching. I was trying to hurry it up, and in my haste I knocked over a plate of pasta the twins had refused. Pasta went flying all over the place. That plate in turn knocked over a cup full of water which almost landed on the iPad sitting there on the table. And I completely lost it.

I screamed, I knocked over other things on the table and kept chanting “f*ck, f*ck, f*ck, f*ckity f*ck!” praying to the curse gods to release me from my anger. Okay, I’m being a bit melodramatic. But really, all of that happened. When I calmed down, as cursing always seems to help (to my husband’s chagrin), I looked over at Ian & Sam. They were staring at me, observing.

I think the very next day, Sam got mad, picked up a toy, screeched and threw it on the floor. He did it a few times for good measure. I remember thinking “oh shit, he did that because of me!!” A couple of days later, Ian did the same exact thing. Neither had done this before.

Right there and then, I thought “that’s it, I have to get my anger in check.” Last thing I would want is to have 3 lunatics living here, including myself. My poor husband would run for the hills.

Lesson: Your children will learn from you, the good and the bad. Seeing my twins replicate my crappy behavior was a wake up call. That was the defining moment for me. From that point forward, I worked on keeping my reactions in check.

Don’t get me wrong, I still have my moments, but they are mild in comparison to the earlier days. It also helps that my twins are at a fun age, that sweet spot between babyhood and the terrible twos. As they have gotten older, taking care of them has also gotten easier.

I’m sure we’ve all had cringe worthy moments we wish we could take back. But at the end of the day, having a mommy meltdown doesn’t have to define us as mothers. It doesn’t mean we are bad parents because we occasionally lose our shit. It means we have greater challenges than most. Parenting twins or multiples is no walk in the park. It means we are human and we are learning as we go.

Where is Doodoo?
Milk, sweat and tears: my quest to nurse my twins
How This Twin Dad Is Rocking Fatherhood
advertisement

Where is Doodoo?
Milk, sweat and tears: my quest to nurse my twins
How This Twin Dad Is Rocking Fatherhood