Published by Jennifer Reinharz on March 5, 2018

A list of 34 Rules for My Daughters popped up in my Facebook feed not too long ago.

I don’t have daughters, but welcome wisdom I can learn from or pass on to my boys. So I stopped scrolling and began to read.

I couldn’t get past number two.

2. Find your tribe and love them hard. True friends are hard to find.

True friends, forever friends are hard to find and are invaluable. If one is lucky enough to have a few, I agree, they deserve to be loved hard.

But what’s with the word tribe? Why does a daughter, son or any adult need one of these?

I hear and see this word and a similar expression, crew enough as it relates to social aspirations, comradery and acceptance to make me wonder. Adults tag other adults on social media and refer to them as their tribe. Educators and parents want to know if a child hangs with a crew. Members new to a community go on missions to find their people.

Perhaps this language and approach encourages, as an acquaintance once explained, a sense of normalcy. She said, “If I have a tribe. My children have a tribe. Then by society’s standards, we are both doing fine.”

Or perhaps it’s rooted in basic human desire. A co-producer and writer for the television show Cheers commented on CNN’s documentary, The Nineties that “The legacy of Cheers is our need to belong. I think that’s what we as Americans are longing for.”

I’m no different. Part of me regrets not joining a sorority in college. I still sometimes think what my teenage years would have been like had I traveled with one pack instead of moving in and out of many. As an adult, one reason I drag myself to a CrossFit gym is because there, everybody knows my name.

But let’s say a daughter does find her coveted tribe, what then? Is she expected to socialize exclusively with tribe members or is it acceptable to make outside friends? Can she invite new people to join? What happens if she doesn’t want to be friends with a person in the group? Does she lose her place? Can the daughter take up different activities? Carpool with anyone else? Sit at a lunch table alone?

Many schools, communities and households make a point to foster inclusivity. Formal curriculum has been developed to teach children to Be the Difference, Be the One and Fill Buckets.

Last year, our local middle school launched a program spearheaded by the student council which required students to sit with different peers during lunch on designated days. Gossip and devices were not permitted. A student facilitator joined the table to help spark conversation.

I was disappointed to hear a few parents privately voice concern. They didn’t like the idea of forcing a child to sit with non-friends during her one, free period. Students also complained. They wanted to socialize with like-minded people and not be told what to do, when and with whom.

This year, I’m not sure if the council tried again.

To me, the lunch table switch was a great idea. Maybe it’s because I’m a kumbaya kind of mom with a kid who’s typically okay with floating. Or maybe it’s because I believe it’s healthy for children to learn about others and productive to go out of one’s comfort zone. I figured students might be surprised to find they get along with peers who they may not expect. The reality is, at some point they’re going to be required to work and socialize with all sorts of personalities. Mind as well get comfortable in a wider circle now.

Find a tribe but Be the One. Be the Difference but stick with your people. Fill Buckets but hang with a crew. Reach out, but huddle tight. The mixed messages confuse me. My guess is, they also confuse daughters on the receiving end.

Advertising that real friendship is best achieved in the form of tribes and crews belittles benefits gained from casting a welcoming net, implies self-worth is predicated upon the group and is just using benign semantics to endorse clique mentality. 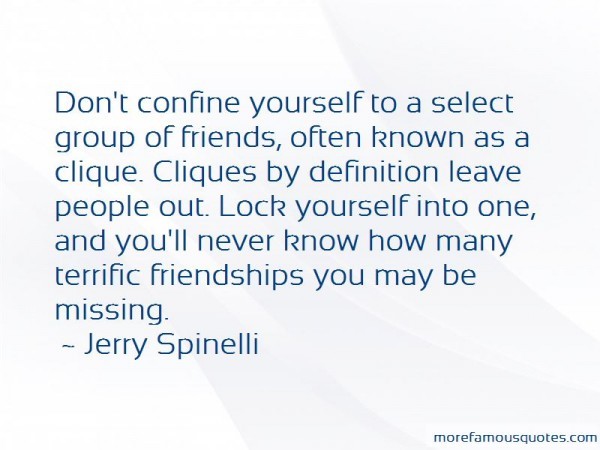 The Adventures of Tim Laughingstock. A Fairy Tale. One.
The People In It
Raising a Kind Daughter
advertisement

The Adventures of Tim Laughingstock. A Fairy Tale. One.
The People In It
Raising a Kind Daughter