To The Mom Who Feels Like a Failure: A LOVE LETTER 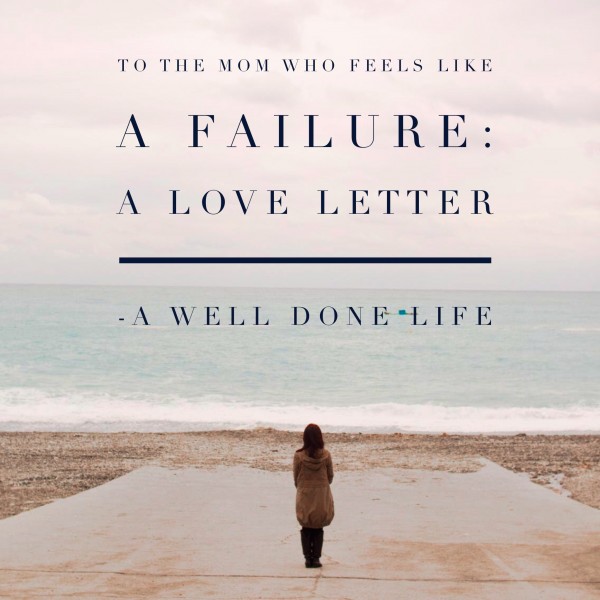 There are so many ways in which we count our failures.

Late for another dental appointment. Fail.

Dirty dishes stacked precariously in the sink. From two days ago. Fail.

Too tired to read one more bedtime story. Fail.

Wanting to escape the mundane, the persistent busyness, the perpetually exhausting everything. Miserable fail.

We spend so much time looking at what we’ve done wrong, always searching for ways to discredit ourselves, that we miss the sweetness of a new day filled with possibilities.

Somehow we’ve convinced ourselves that we need to be different or better. A constant mantra of you’re not good enough. And it spills over.

It spills over in the way we communicate with the people we love. It spills into the relationships we foster or allow to wilt and drift away. It overflows into our children. Because if we can’t look in the mirror and find good in the person staring back at us, then we’re in real trouble. How do we accept the people we’re raising if there is no acceptance of the person we’ve become?

It’s not about positive talk or reciting affirmations. It’s about understanding WHO we are in Christ. It’s about taking an inventory of the wholeness of ourselves and being able to count on both hands the ways we are immeasurably unique and loved.

By nine o’clock in the morning I have silently named at least a dozen ways in which I have failed. It begins when I wake up and am still exhausted. I automatically chide myself for not having the wake-up-with-the-sun-cheeriness that is natural for many of my friends. As I’m brushing my teeth I take in the disheveled hair still tied in a bun from yesterday, now hanging off the side of my head like Princess Leia with a hangover. And how on earth does a thirty-seven year old mother of four still get acne?

I stumble into the kitchen, mindlessly pulling out cereal and bowls, the kids already asking a million questions I’m not awake enough to want to answer. I know I should probably have put on a bra but I’d like to delay the heartburn that comes with wearing a noose around my chest until I’ve at least had my coffee. By eight-thirty I still look like a hobo and there is school to teach.

I promise myself that tomorrow will be better. I’LL be better. The alarm will be set for 7am, I’ll jump out of bed anticipating a new day, shower and be presentable before the kids are awake. I know I can be better is what I tell myself the rest of the day. That invisible stick I measure my day with is so high I don’t know how I’ll ever reach the top.

And that’s just the beginning. I convince myself I’m not good enough and yet I wonder why I doubt myself. Why at the end of the day-instead of counting the things that went right-am I’m checking off a mental inventory of everything I did wrong? How I could have been kinder, sweeter, more patient, out of yoga pants, washed my hair?

I think it’s because we’re scared. I’m scared. I think we’re scared to say this is who I am and I’m. good. enough.

We think that by appreciating, by finding value in who we are that somehow we’re saying we’ve reached the best of who we are. What we should be saying is this is where I am right now and it’s more than okay.

But how many of us do it?

How many of us look in the mirror and say honey, you are ROCKIN’ this mom thing! Little Johnny didn’t break anything at the playground and Missy jammed a dead frog in her pocket that leaked guts everywhere and you didn’t even bat an eyelash. You had dinner ready {almost} on time and nobody gagged on their peas. ROCKIN’. IT.

I’m a stressed out mom to little twin girls who {I’m pretty sure} delight in torturing me. I love them madly but also want to send them to preschool for 23 out of 24 hours a day right now. My oldest daughter was just diagnosed with ADD, which I often take as a personal failing, and my son lied to me yesterday about his school work. Again.

Tonight when I say my prayers I can find a million and one things to count as failures. But seeing my life and the hard things that challenge me daily as failing is no way to live.

It’s not a failure to have toddlers that drive me crazy one minute and make me want to smoother them with kisses the next. They are proof that God has both a sense of humor and a keen understanding of what I still need to learn and accept as a mother.

My daughter’s issues are not my fault nor are they her’s and they most certainly will not be her downfall. While I feel misplaced guilt, that feeling is nothing but a lie and will hinder her ability to flourish if I nurture it. I fail her only if I allow her circumstances to define who she is as a person.

My son’s lying hurts me most but I have to remind myself that his lying isn’t my failure. We are sinful people and that includes my precious boy whom I have such high expectations of. We have taught him right from wrong and his choice to lie-and the consequences that followed-are a part of his growing and not my failing as a mother. It hurts my heart, but there will be more of these growing pains that will eventually shape the kind of man he chooses to be.

When we stop assigning worth to ourselves according to how successful our day felt, there will be a profound change in American households. Mothers will give themselves permission to laugh and play on the floor with their children instead of moving on to the next task waiting to be checked off a never-ending to-do list. Our children are begging for our attention but we’ve allowed ourselves to be held hostage by the doing.

Tomorrow is a new day. Will you define it by your shortcomings or choose to bloom where you’re planted right now? This is our moment and these are the memories that will last a lifetime.

I’m sick of living in a perpetual state of failure.

It’s time I start seeing myself as a woman created by an awesome and perfect God.

A woman who shows up when it feels impossible, who has arms to hold and love to give.

I asked my son this morning how he sees me as a mom. I asked him what kind of mom do you think I am?

He smiled and without hesitation said AMAZING.

To him I’m AMAZING.

Ask your kids how they see you. Ask your husband or your friends. You’ll be surprised because the eyes they see us with are so much more forgiving than our own. 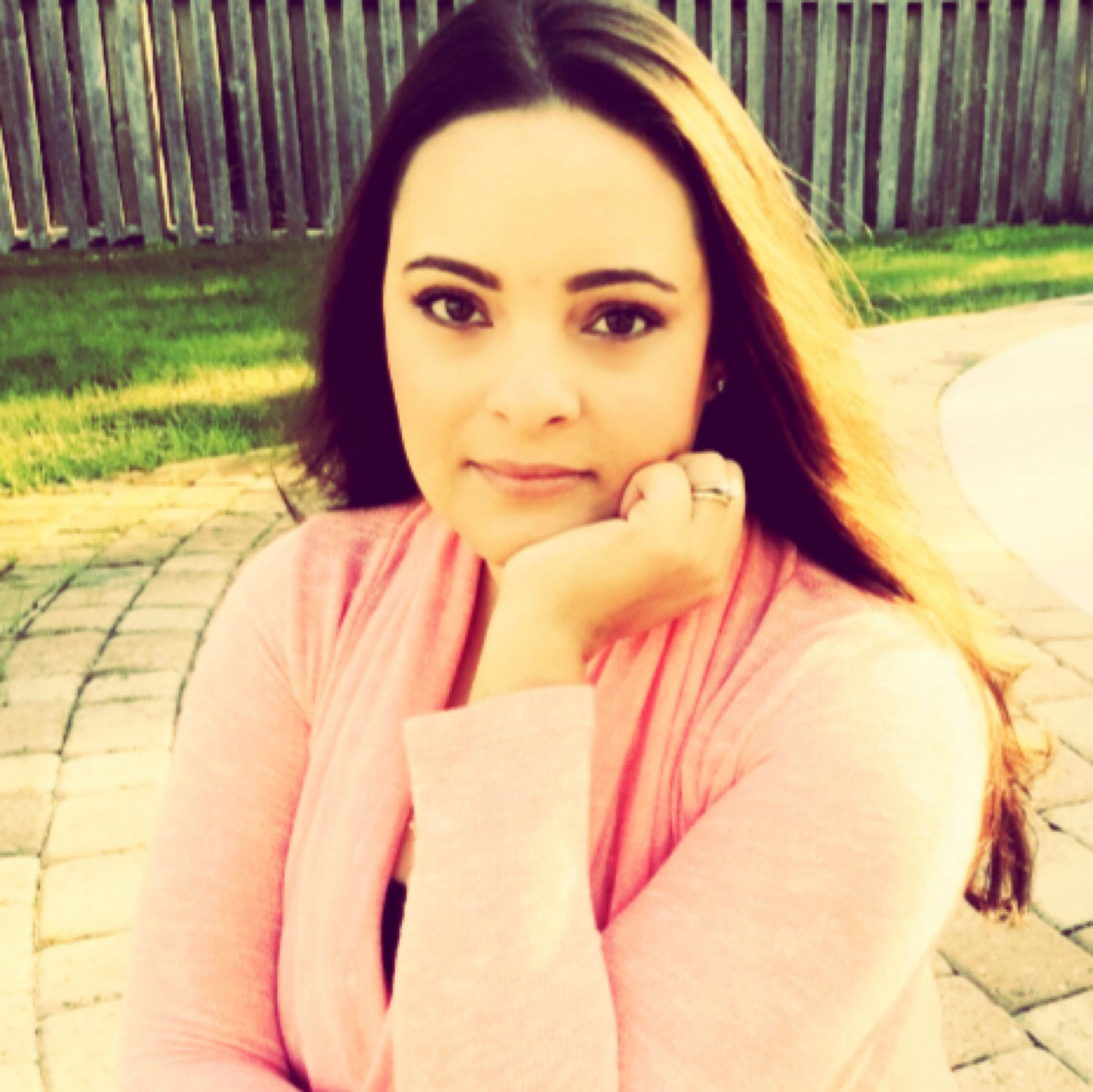 April Lakata Cao is a military wife, mom to four children, accidental homeschool by day and writer by night. She opens her heart and invites women to live a life well done on her popular blog, A Well Done Life.