Inclusion is How My Son Started Walking

Published by Jillian Benfield on August 4, 2018 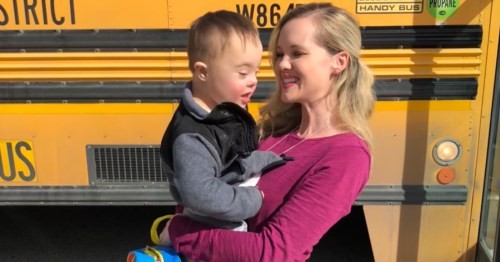 Earlier this year I felt a kind of panic well up inside of me that I had never experienced before. I was worried and anxious about my son Anderson’s development. Anderson has Down syndrome.

I knew Anderson was capable of walking, but he didn’t want to. He hit a plateau with speech and occupational therapy was his least favorite.

I had just completed six months of advocacy courses through Partners in Policymaking. I wrote an article on Inclusion that went viral and yet because I was a stay-at-home mom, it didn’t dawn on me to start the inclusion process. He had only just turned two.

For three weeks, I dropped him off at pre-school and then went to my car and cried. I remember being sad dropping off my typically developing daughter at school for the first time, but this was different.

I often say that parenting a child with Down syndrome is life intensified, the highs are higher, the lows are lower, and the angst that hung between the ignition and me was thick.

But I kept taking him because of what happened on his first day. He walked at school.

He kept walking at school even though he wouldn’t do it at home. Inclusion was working. He was the only non-walker in his class and that was the motivation he needed to start taking his first steps.

Unfortunately, he could only stay at that school for three months because we were moving. So, I would drop him off at school and then research new preschools that would not only take him but wanted him.

I found one. The director was genuinely excited to have their first child with Down syndrome. Anderson had been at his new school for two months when I approached his teacher about his development. She said, “He puts his head down when I try to get him to talk, but at circle time and lunch time, he starts ‘talking’ and answering questions.”

Inclusion was working. It is working.

It’s not only working for Anderson, but also for those around him. I told his teacher that I might be pulling him from school later this month because we are having our first IEP meeting at our neighborhood public school. She cried.

He’s the only kid in his class who doesn’t talk in sentences and has very few full words. Yet, words aren’t needed to build a friendship. I linger around the gate to catch him laughing and hugging his friends.

Us adults can provide Anderson the tools, but it’s his peers who will motivate him to use them.

Tomorrow we have our first IEP meeting. It’s the first of many in our future and I can feel that thick angst hanging over me again.

I observed the classroom twice, Anderson will be the youngest, by far the smallest and the most behind. I thought about waiting. I thought about keeping him in his environment a little longer.

What if he’s not ready?

But what if he is? I realized I couldn’t be the one to stand in his way.

Inclusion is how he took his first steps, and it will be how he continues to walk into a future that is his own.