Did You Red Shirt Your Child?

Published by manvsmommy on September 18, 2015

Next week Man will participate in a “moving up” ceremony, a graduation of sorts, from pre-school. I remember the first day so clearly. I cried; he walked right in. I was fearful; I knew what a challenge he could be at home—what if they couldn’t handle him? 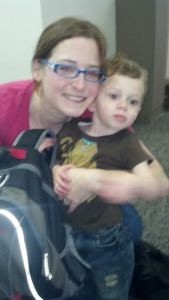 As it turned out, he was a challenge for them too. Much to my relief they embraced us, guided us, and appreciated my level of involvement. Most of all, they loved him for the little Man he was, and the big Man he could be. They supported us through evaluations, therapies, and aides in their classrooms just for him. It turned into a place he felt comfortable being exactly who he is.

Throughout the years, the idea of “red shirting” came up often. In fact, it became an idea on which I was completely hyperfocused. Red shirting is holding a child behind for an extra year before sending them to kindergarten. The term came from college sports, where freshmen were often kept off the team (red shirted) until they reached their sophomore year. Over time, it became popular, due to studies that focused on better athletic performance from children with birthdays that fell in January-March. If it could work with athletic performance, why not academic as well, the thinking went. It became popular among parents of children with later birthdays, especially boys who are slower to mature.

Each year came and went and I was no clearer on what the correct answer should be. He has a late birthday (though within the district’s cut-off), challenges with impulse control, hyperactivity and sensory issues. The pieces were there, like a huge red neon sign blinking “HOLD HIM, HOLD HIM!” However, those weren’t the only signs, and there were an equal number of reasons to go ahead and send him to kindergarten. Following many (too many) conversations with his dad, and with the help of input from his therapists and teachers, we came to the decision to send him to Kindergarten.

The deciding factors on why we ultimately made the decision to send him on to Kindergarten are irrelevant. Every child is different and every family makes the choice that is best for them. I weighed all of the options, pros and cons. I did research; I asked the team of people who provide us with therapy and help every day. Though the decision was a scary one to make, I can rest easy knowing that it was well thought out.

So I guess this is my ode to you, my sweet Man. You have worked SO HARD to become the Man you are today. I can see now that your challenges, though difficult for me, are very tough on you as well and I commend you for remaining cheerful, happy, and sweet no matter what.

You began your pre-school education a few weeks shy of two. I remember the first day of the two’s, I was pulling you hard to my chest as you tried to break free and run into your classroom. I forced a hug and cried; you pried yourself free, darted in and disappeared into the classroom. Now, at four-and-a-half, you are so much more a little boy ready for Kindergarten than the toddler I sent a few years ago.

You have learned so much already, and I can’t wait to watch your excitement as you begin to learn so much more. But really, I think you have taught me so much more during this time then I could ever possibly teach you. You taught me how to be a mother and you made me a great mom. I couldn’t know what it would be like to raise children, but it’s damn hard. You taught me that I really needed to stop and listen to you, to attempt to see things from your perspective, and to ultimately follow my gut. You taught me patience and flexibility. Some days, being your mom is extra stressful, but I learned that being calm and patient and allowing myself to be flexible helps us all.* You showed me that I don’t want to be your best friend, I want to be your friend AND your parent. I would not be a good friend if I didn’t take my responsibilities as your mom seriously. You will have lots of friends and hopefully count me as one of them, but you need a mom first.

*As a side note, I still work on this constantly.

I am so excited for you to start this adventure called school. I think it will have its challenges, but you’ve taught me well and we will get through them together. So, off you will go, onto that yellow bus – you will ride to school with your friend and I will sit on the street and cry. 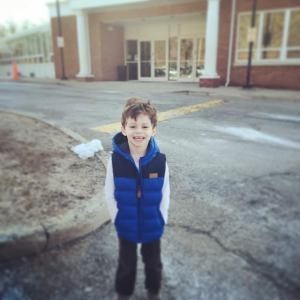 Keep Your Child From Crying The First Day
Starting Kindergarten
My daughter is starting kindergarten, and I'm letting go of my own expectations
advertisement

Keep Your Child From Crying The First Day
Starting Kindergarten
My daughter is starting kindergarten, and I'm letting go of my own expectations