This 62 Year Old Kid Started A Game Of Tag In A Store: The Life Lesson We Shouldn't Forget 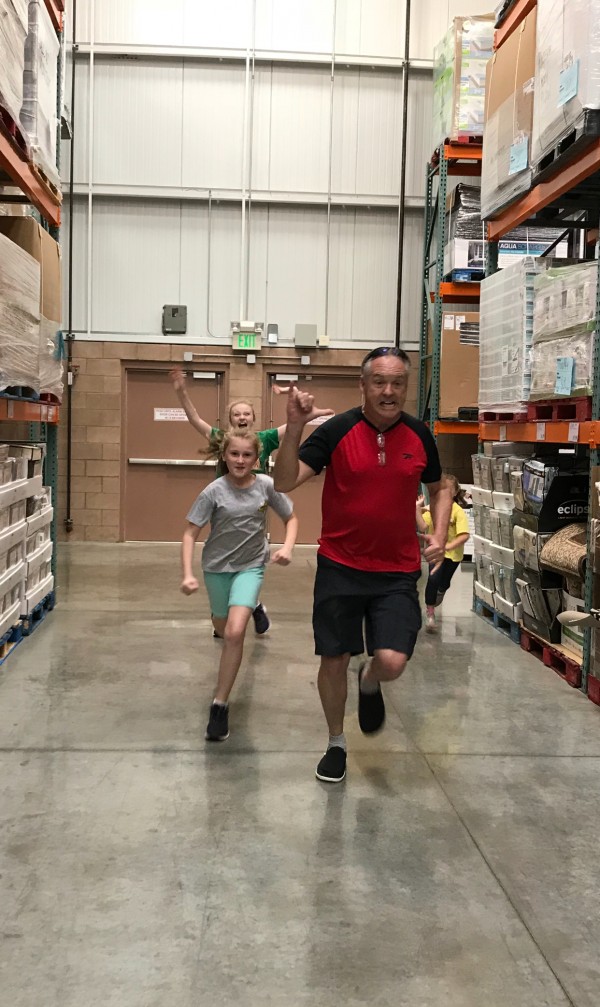 The picture may be blurry, but that is in fact a 62 year old kid running through the aisles of a Costco store while being chased by four laughing children.

It’s totally inappropriate to be running through a store, ducking under displays, and playing tag. Am I right?!

At least, that was my first thought. You see, that giant 62 year old kid is my father, and those laughing, excited children are my own.

I try and be a good parent. By good I mean that my kids all know (and are told dozens of times a day) that they are loved, and I try hard to do my best to teach them all the things they need to know to grow up and be successful adults. That means, I spend countless hours, (years really, and often minutes that feel like years) repeating myself over, and over, and over- you know what I’m talking about- trying to teach my kids the things they will need to know when they eventually leave home.

Things like, It’s not acceptable behavior to go running through a store full of people while you play tag.

I have to give my rascals some credit. When their grandfather asked them who wanted to play tag they hesitated at first.

“We can’t play tag in the store, we’ll get in trouble!” With furrowed brow and big eyes she looked to me for confirmation.

“She’s right.” My disapproving stare fell upon the other three kids and my dad who was completely unperturbed by my glare.

“You all would be kicked out by security. It’s against the rules to run around a place of business, no matter how bored you are.”

“We’re too fast for security, and if they do catch any of you, just lie and tell them your name is Joe Jablonski and you live at the North Pole.”

“Who’s Joe Jablonski?” This from the 8 year old.

Grah, “Exactly! Now...GO!!” With that, Grah took off running down the cereal aisle, fast. Not two seconds later, all four kids tore after him in hot pursuit. 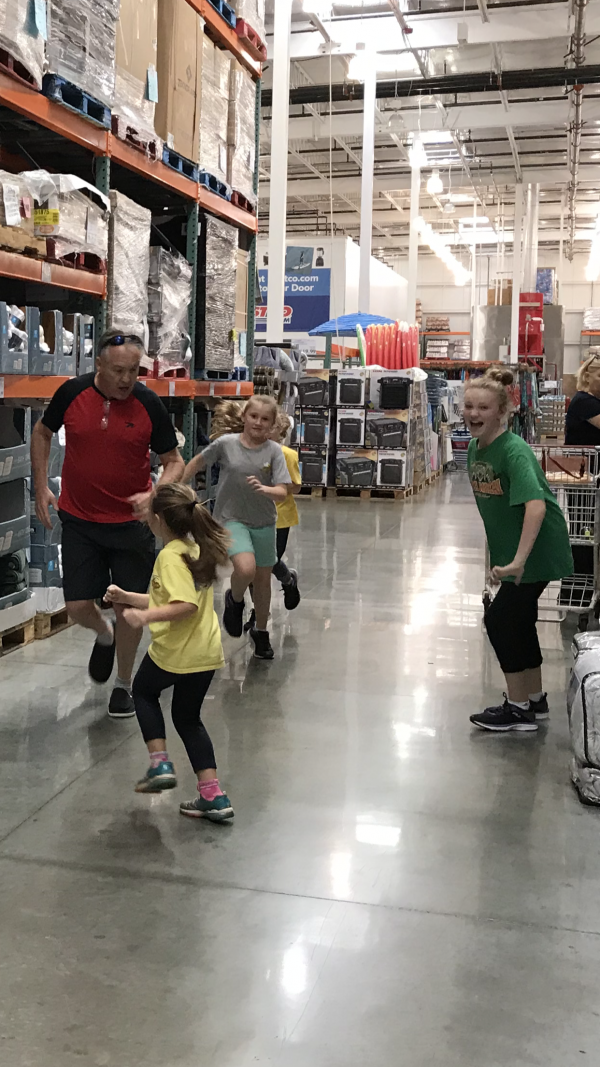 I finished throwing a box of oatmeal in the shopping cart and heaved a sigh of annoyance before heading down the aisle in the direction that they had just gone. I was obviously going to have to play the role of Mommy Destroyer Of Fun, Voice Of Propriety, and put the kibosh on their game of tag. What fun is that? Do they think I enjoy having to discipline? I HATE having to discipline them, but it’s my job to make sure they grow up to be responsible, kind, law abiding adults.

As I neared the end of the aisle I heard excited laughter behind me and turned around in time to see me dad dart past the aisle I was in with my kids just a few strides behind. I noticed they had a little audience. A couple of elderly ladies had stopped pushing their cart and seemed to be giggling and pointing and the circus animals, er, my family, who were now running down the center aisle of Costco.

I lost sight of them several times as they zigzagged through the aisles, trailing laughter in their wake.

“Seriously dad?!” I called after him as Grah ran past the front of my cart yelling over his shoulder,

“Never going to catch me!” to the children in his wake.

Just as I was about to put the fear of god in my children with a verbal thrashing, my 8 year old cut off an old man causing him to yank his shopping cart back as he came to a sudden stop to avoid hitting her.

“I’m so very sorry!” I cried as mortification filled me. Meanwhile, my 8 year old cried out a “sorry sir” over her shoulder as she never even broke stride. She was followed in rapid succession by her three siblings.

“I’m going to kill my father!” I thought. But aloud I again repeat,

“Im so sorry! Those are my kids. The giant kid, who should know better, is my father. Obviously, I’m going to have to kill him for starting a game of tag with the kids in the middle of a store, but before I do that, are you okay?”

“I’d be doing the same thing if I could! I saw them as they ran past me in another aisle, they sure are having fun!” He gave me a wink and continued to chuckle as he walked on past me.

His words rooted me where I was standing. “Id be doing the same thing if I could, they sure are having fun” he’d said. And they were. They were having the time of their lives and making a memory that they would carry with them always. What I wouldn’t give to be able to make one more memory with my grandfather.

Life is full of rules and restrictions. Sometimes you have to just say “What the hell” and throw off the yoke of responsibility and live a little.

As English novelist Rose Tremain said, “Life is not a dress rehearsal.” I love that quote. It’s so easy to become so focused on the future that sometimes we forget to stop, breath, and just enjoy.

So that’s what I did. I let my wild kiddos chase their grandpa around until they were all hot, sweaty and exhausted. In the meantime I got to shop unhindered by parental responsibility, and in a surprising peace that was broken only by the sounds of giggling as Grah and his biggest fans went streaking past.

Wishing you all much Aloha and many days filled with making beautiful memories, Tree

Turning the corner: Embracing milestones during the pandemic
​How to Prevent a Grocery Store Meltdown
Why I cried in the 'Star Wars' aisle of Toys R Us
advertisement

Turning the corner: Embracing milestones during the pandemic
​How to Prevent a Grocery Store Meltdown
Why I cried in the 'Star Wars' aisle of Toys R Us