10 Things I Wish I Had Known About Baby Boys

Published by Sammiches and Psych Meds on March 8, 2015 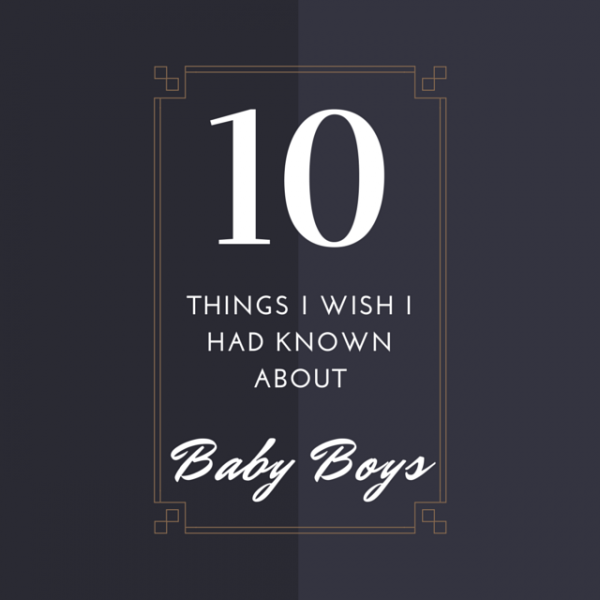 Bringing home a new baby is hard no matter what the gender. But as a mom of three boys, there are some things I wish people had told me about raising little men.

1. They pee almost immediately after you remove the diaper. Cold air and bath water are instant triggers. I completely underestimated the number of times I'd be scrubbing pee out of my carpet and off my walls as a new mom.

2. They get some serious distance regardless of how big or small they are. Doesn't matter if they're eight pounds or eighteen, not only are they peeing a lot, but they're also setting distance records. I never expected to mutter, "OHMYGOD, he peed in his own mouth!", especially not more than once -- IN A SINGLE DAY.

3. Circumcision isn't pretty. No one expects a newly circumcised penis to be perfectly healed right away, but you also don't expect all that oozing and crusting for days after, either. Taking proper care  of it is stressful, to say the least.

4. Developmentally lagging behind their female counterparts is not unusual. Even in the womb, baby boys' organs can develop and mature more slowly than baby girls'. Pitting a boy's milestones against those of girls the same age can drive a mother mad with worry.

5. They're all about moving objects. It can be disconcerting when a baby boy seems more interested in a moving fan than his mommy's facial expressions, but the fact of the matter is, baby boys prefer looking at objects in motion before human faces. Mobiles are their friends.

6. Penises are practically built-in playthings. They touch themselves and each other. A LOT. Who knew penises could be so...stretchy?

7. They can take longer to potty train than girls. Physiologically speaking, many boys don't produce the hormone that tells them they have to go until much later than girls. Additionally, boys tend to be more physically active than girls, which can make getting them to take a break and sit on the toilet a challenge.

8. Toy preferences can be biological. While society's gender expectations and marketing of certain toys as "for girls" and "for boys" are certainly to blame, biology just might play a role in boys' tendency to gravitate toward monster trucks and shoot-em-ups. For whatever reason, higher levels of testosterone in both boys and girls can make traditionally "for boys" toys more appealing.

9. They're hard-wired to be squirmy worms. Many little boys are prone to moving and fidgeting more so than girls, even in the womb. No wonder I seemed to take more karate kicks to the bladder during pregnancy than my sister-in-law did with my niece.

10. Aggressive behaviors aren't cause for alarm. Thanks to that testosterone, little boys tend to exhibit aggression more often than little girls. No wonder my living room feels like a WWE wrestling arena.

Sammiches and Psych Meds
> See my posts
> Visit my blog

Lola Lolita is a wife, mother, educator, and chronic sufferer from anxiety, immaturity, and children. Find her on her blog, on facebook.com/SammichesPsychMeds, and in her book, Who Pooped on the Corpses? And Other Pressing Life Concerns.