There’s something special on the other side of this moment... right?

Both children are screaming.

The 4-year-old is crying because I gave him a slice of cake. He didn’t want a slice of cake, he explains through body-racking sobs, he wanted a whole cake, with a candle in it, just like we did the first time when we sang to Daddy. And now I’ve cut the cake and everything is terrible forever. Fat tears pour down his miserable face.

The 7-year-old is crying because I did not give him cake. As a consequence for a prior infraction, he gets no dessert this week. He chose his own punishment, which at the time I thought was highly mature. I even gave myself a pat on the back: I am nailing this discipline thing, I told myself. He gets it. Haha, silly mommy. The 7-year-old was under the impression that he could negotiate the terms of his punishment to occur in some far-off future, and now he’s furious and betrayed that we are actually enforcing his consequence and eating dessert without him. (Well, some of us are eating, some are sobbing into their plates.)

I pick up my own piece of cake from the pan and shove it directly into my mouth.

“Just another magical moment,” I say to my husband, as our younger son wails and our older son slams his bedroom door.

Half an hour before, we’d been having a dance party to Pharrell’s new song, “There’s Something Special.” As soon as I’d heard it, I’d become convinced that it was a song about motherhood. I mean, the lyrics!

“I’m a sinner; sometimes I sat down when I got tired” – who but a mother thinks it’s actually a sin to sit down when you get tired?

The chorus really got me:

“There’s something special on the other side of this moment
And it's about what you and I decide
And it's important for you to remember we did this together
And finally, they'll know the story of our lives.”

It spoke to me. So we had a family dance party, and we made a video for the TODAY Parenting Team, and it was all glorious. Everyone was happy and giggly and sweet. My husband had cleaned the living room and the late-afternoon sun lit our smiling faces just so. It was part of the highlight reel of parenting.

The video of this moment, however, would serve only as footage for some sort of "scared straight" abstinence program – two children screaming their heads off.

“You cut the cake! You ruined it! I will always be sad!”

“You’re eating cake WITHOUT me?! You are SO MEAN!”

I try to have faith during the sucky moments that there WILL be something special on the other side. I fully expected good days and bad days as a parent, but no one can fully prepare you for just how FAST it changes; how children can go from sweet little angels sent directly from heaven to tantrum-throwing demon spawn in the time it takes to, well, cut a slice of cake.

Sometimes I look at other people’s families – in public, or their highlight reels on social media – and think I must be doing something wrong.

But I don't think I am. No one gets just the highlight reel – everyone has to slog out the moments of children screaming and slamming doors and being called the WORST MOM EVER. Don't they?

On the other side of that moment, for me, life went on. Teeth got brushed and bedtime stories got read and everyone, eventually, calmed down. The little one snuggled into me, the big one told me a knock-knock joke and let me ruffle his hair before bed.

It's not highlight reel material. Or maybe it is. These ordinary moments – the smiles, the snuggles, and yes, even the tears – add up. I signed up for all of this. And even when it sucks, it's still something special. 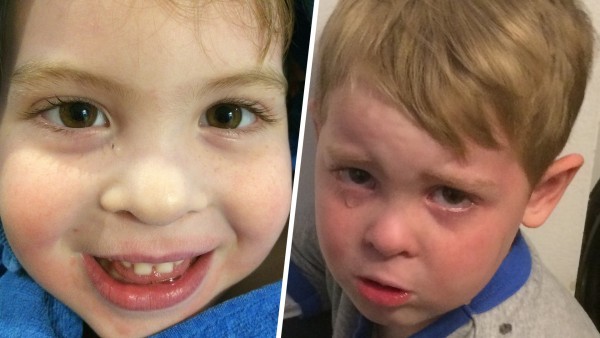 Burnt cakes and mismatched decorations: 'Here's to the moms who aren't Pinterest-perfect'
11 Discipline Mistakes Parents Make
​How the Hell Did I Get Here? And Other Random Thoughts Since Children
advertisement

Burnt cakes and mismatched decorations: 'Here's to the moms who aren't Pinterest-perfect'
11 Discipline Mistakes Parents Make
​How the Hell Did I Get Here? And Other Random Thoughts Since Children