The Royal Series - Letting Go of the Princess War 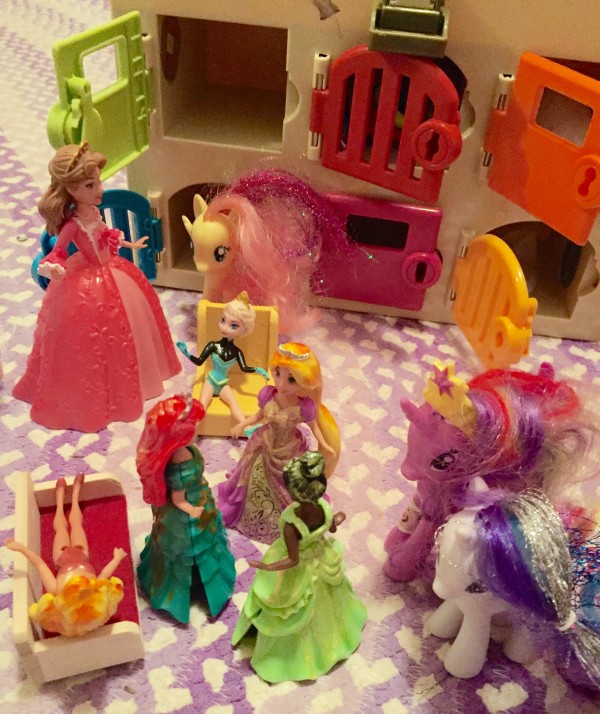 I remember reading an article about how to compliment girls when my daughter was around two. The message was to favor substantive compliments over surface ones. “You’re so creative!” vs. “You look super cute today.” At the time, I panicked. I had already spent two years doting over my daughter’s beauty. Was it too late? Would she be a shallow, image-obsessed-tween turned wanna-be-actress turned pageant-mom? The guilt washed over me like…well, like the guilt always washes over parents who read online parenting articles. This acute awareness of substance over surface stuck with me and made its way into my parenting style.

My daughter became princess-obsessed at age three. If you had a threenager in 2014, you’ll understand the headache that comes with “Let It Go” on repeat and being forced to wear toddler sized tiaras during playtime. I fake-smiled when the grandparents gave her gifts of crowns, dress up outfits, and fake makeup. I stealthily replaced them with magna-tiles and legos but all became part of elaborate fairy tales. Even the cages of a veterinarian kit turned into rooms of a royal palace.

When my daughter declared her intent to be a princess when she grows up, my instinct was to destroy all of the pink things. But once I allowed myself to chill out and really listened while we played, I recognized that the princesses were just girls. They weren’t waiting to be saved by Prince Charming. They were playing on the playground or going to the doctor or having picnics. They had dreams and feelings and opinions. They simply happened to be pretty and sported gowns in fabulous castle accommodations. In letting go (pun intended), I was able to further encourage my daughter’s creativity.

This parenting epiphany helped me and my mother create a book series about smart princesses with meaningful careers: The Royal Series. The stories feature girls who love to dress up but use their skills to help people as a dentist, farmer, and architect. Girls who lean in and don’t lose their girliness in the process. Girls that are creative/cute or cute/creative and grow up to be women of the same complexity. Awesome girls that just happen to be princesses.

Once I was willing to look beneath the surface of the princess obsession, I was able to find substance. I hope The Royal Series helps other parents empower their children in the same way. Now when I ask my daughter what she wants to be when she grows up, she says a mom, an author, a doctor, a baker, and – a princess.

Laura Venos is the author of The Royal Series. She is a career counselor and lives in Arlington, VA with her husband and two children.

Laura is a career counselor and mama of two – a five year old princess-in-training and a two year old busy boy. She is passionate about creating career confidence in little ones.

Enroll Your Child Today For The Princess Charm School Class Of 2018
If I Can't Be A Princess, What Should I Be?
Holding on to the magic
advertisement

Enroll Your Child Today For The Princess Charm School Class Of 2018
If I Can't Be A Princess, What Should I Be?
Holding on to the magic