The Organ Of My Discontent 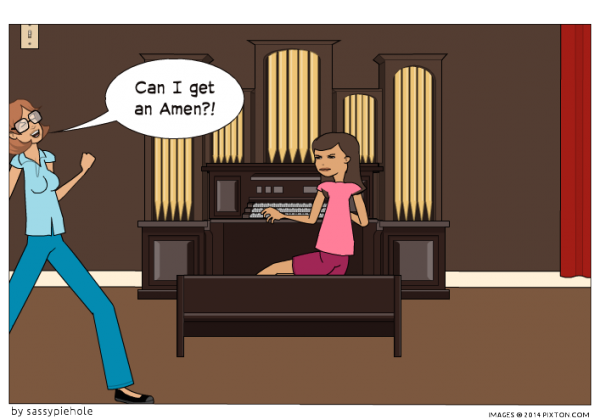 When I was little, we had an organ. It was a ghetto version of a piano for the middle-class family and I loved everything about it.

I would spend hours on that bench; pushing down on foot pedals and mashing the keys together into one harmonious vibration. It was a beautiful escape from that which I could not control, and the fact that I was able to play by ear made it all the more enjoyable.

Then one day, my mother walked in and suggested I 'take a few lessons.' We argued back and forth for a bit until she finally gave up, mumbled a few words of guilt, and traipsed off into the kitchen to finish making our blankety-blanking dinner. Several months later, she tried it again, but this time with a vengeance.

"You know, your father's birthday is coming up..."

From the second the words blew off her lips, I knew it was a losing battle, and I complied by signing her contract with a salty tear.

Mr. Sullivan was a presence larger than life. He had thinning hair swept off to one side and an angry fist that he used to further my education.

With every beat of his fiery blow to the bench, my heart shook a little deeper. He wasn't a nice man and I remember enjoying him very little, but I promised my mother I'd complete one series of lessons for my father, which I did —reluctantly. She wanted me to surprise him by playing a particular song on his birthday. I can't recall her song of choice, but I do remember feeling particularly annoyed with the sentiment behind my torturous commitment...

I have always believed that the best gifts are the ones that come from the heart. And I wish I could have looked past my anger to see what my mother was trying to do. Instead, I chose to fight back with retribution. I wanted her to know how she ruined my tiny world by forcing me to abide by her rules. So after the big reveal, I quit playing altogether, and never touched the organ again.

There are some things in life you cannot control, but if you can tone down your anger and see through the fire, you might find a way to accept it. I wish I would have known that then.

Live hard and play your life away —it really is that short!

Lisa René LeClair is a writer, humorist, social media junkie and mom who shares childhood stories and bad advice for your amusement at Sassypiehole.

What My Babies Taught Me
Life Lessons From Mom
My Family is Like Everyone Else's, Except When it's Not
advertisement

What My Babies Taught Me
Life Lessons From Mom
My Family is Like Everyone Else's, Except When it's Not