The Moms of Fall

Football has been on my mind a lot lately because this weekend marks the return of a “normal” football season for my boys, after a very very long break.

So, Kenny Chesney's "Boys of Fall" is the soundtrack to my life these days.

When I was in high school, sitting in the football stadium stands playing "Carry On My Wayward Son" on my trombone with the rest of the high school marching band (I was SUPER cool), I remember thinking that football was violent and never ever pictured myself being a football parent. In fact, when my oldest son was 6 years old and started asking about playing football, my initial and frequent response was "absolutely not!!" I recall thinking that it was too rough, too unnecessary and far too much of a commitment from me and for him. I was a solid "no."

But, he was determined to play and one year later, after I had done lots of research and talked to some of the local youth football coaches, I decided to let him try it. After all, in that year since I had said no to football, I had witnessed some pretty serious injuries in his little league baseball division. I convinced myself that on some level football might be safer since my child would be fully padded and always in a helmet with a face shield. Plus, I am also firmly against children specializing in just one sport at this young age and much of the research backs my stance.

I sat, in horror, through those first few weeks of football practice as children ran laps and worked out, sometimes until they puked because they had eaten too close to practice, often through tears and while coaches yelled at them. "What the hell did I sign my son up for?"

My son asked me if he could quit football after just two weeks. While a big part of me wanted to take his little hand and march him back to my car, leaving his stinky football equipment on the field, a voice inside me told me that I couldn't let him quit. He needed to stick it out and see what a game was like before he walked away. I didn't want him to have any regrets and I was convinced that he would be completely done with football after one game. So, he continued on and was one of the children selected to dress (but probably not play) for the first varsity game - a home game.

That first game day was almost magical. The sun was bright and hot, a perfect New England September day. The music pumped throughout the stadium and my son got to hear his name announced over the loud speaker at his high school's football stadium as he ran through streamers held by cheerleaders. Although I cannot recall for sure, I am fairly certain that I cried. After all, I cry a lot - especially when I am proud of my children. I was proud of him and his teammates. They had made a commitment to each other and to themselves. Even though he didn't play much that game, he was hooked and he never ever asked to quit football again.

That season, our family's inaugural football season, was perfect. My son, my quiet, insecure and timid son was changing before my eyes. He was becoming more confident, more assertive and more hopeful. I suddenly understood what sculptors like Michelangelo must have felt as they began to see their works of art being carved from blocks of marble. My son was being chiseled into an amazing version of himself, a version I had always known was inside and I had football to thank for the transformation.

Our second season of football was a bit different and after two games my son cried again - not because he didn't like the game but because he felt "invisible" "not good enough." We talked about it as a family and he decided that the best thing to do would be to talk to the coach and find out how he could get better, how he could get more playing time. I watched him have that brief but terrifying conversation and I teared up again (see? I cry. A lot). I knew many adults, including myself, who were too afraid to approach an authority figure and ask for such feedback. But, he did it and things began to change. He ended the season a starting varsity player and truly became him that season. I saw football's lasting impact on his school work, his friendships and in his other sports.

So, when our youngest son became old enough to sign up for football, I didn't hesitate. He knew what he was signing up for - he had just watched his brother play two full seasons. Of course, the transition into the practices and conditioning was difficult for him but he never asked to quit. Just three plays into his very first football game, he scored a touchdown on a quarterback sneak play. I suspect that moment will be one of the moments that sticks in the photo album of his childhood in his mind - one of those moments he'll tell his own children about someday. He beamed coming off the field and couldn't wait to talk to his big brother about it. It should come as no surprise that I cried then too 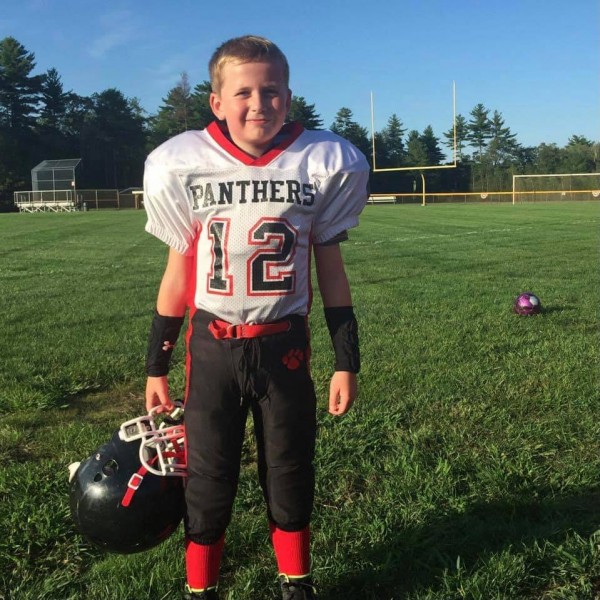 Cheering
Son, your game is just beginning!
I let my son quit baseball: Here's why
advertisement

Cheering
Son, your game is just beginning!
I let my son quit baseball: Here's why