The Day a Bag of Candy Saved Me

Published by My Dishwashers Possessed-Kathy Radigan on March 15, 2019 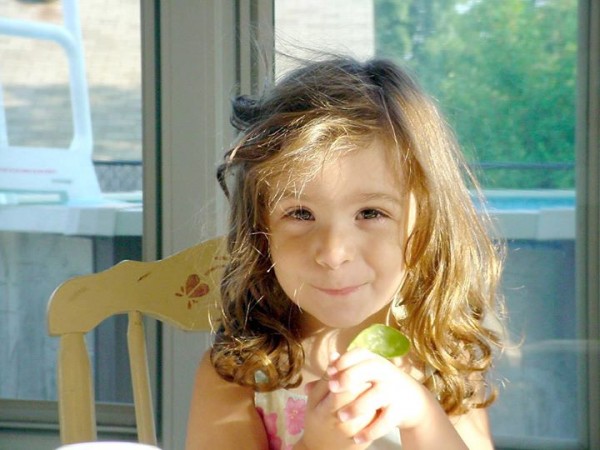 When the phone rang I didn’t think twice to run and pick it up, even though it meant leaving my five-year-old son and two-year-old daughter alone in the sun room with a preschool goody bag filled to the brim with Easter candy. I figured it was my mom asking me a quick question about the upcoming holiday. Not for a second did I think I was picking up a call that would change our lives forever and fill me with a terror I had never known before.

When the pediatric neurologist recommended that Lizzy have an MRI, he told me he was not one to routinely schedule this test for a child so young. But he was a little concerned with the size of her head and the shape of her eyes. I was already worried about the significant speech delay that led me to schedule an appointment in the first place. There was a part of me that was relieved my husband and I were not the only ones who suspected something was really wrong with our daughter, but I desperately wanted to believe everyone in our life who said all would be well.

That was not the case.

The doctor told me that our daughter’s MRI had shown significant damage affecting the white matter in her brain. Serious and life threatening conditions were mentioned. “Some of these are the worst of the worst” are words that I’ll never forget hearing him say. Tests and procedures that Lizzy would have to have were being planned. Through it all I sat at my table quickly writing down everything so I could report it to my husband and family.

In a matter of minutes, our life had changed.

The idea of taking our family, moving to a deserted island, and cocooning ourselves away from the rest of the world crossed my mind. As did the thought that there was no way I was strong enough to handle this. Nor smart enough. I was a theater major and former executive assistant, do I even have the skill set for this monumental task?

The doctor finished our conversation with the warning to look out for any signs of regression from Lizzy. This is when the reality of the situation really hit me. My daughter was barely talking, often seemed lost in her own mind, and was getting speech, occupational, and special education services. He wasn’t just talking about her future development and whether or not she would go to a typical preschool or even college one day. He was talking about her life.

I quickly tried to call my husband, Joe, and when I couldn’t get him, I called my mother. Tears, that don’t always come easy for me would not stop flowing.

Keep in mind Tom and Lizzy were still playing in the sun room with a bag of Easter candy right there for the taking. It finally occurred to me that I better check on them. There they were, covered in chocolate, smiling and playing, none the worse for wear. I couldn’t help but laugh. It was in that moment that I knew the answer to the question, how was I going to deal with this? I was just going to have to do it. The kids needed to be bathed, dinner had to be made. The day-to-day tasks of living were not going to stop just because my daughter had a brain disorder.

Thankfully some of the worst disorders the doctor mentioned that day have been ruled out. But all these years have gone by, and we are left with questions that seem to have no answer. The future is still unclear. Lizzy has made gains that some professionals thought she never would, but she remains very delayed, having a lot more in common with a child of about three or four than a teenager of 17.

I would be lying if I said it has been easy. It hasn’t been. But through it all there is Lizzy. Her spirit and smile can light up a room. She adores her family, fashion, music, jewelry, and animals. It is her drive and spirit that spur me on when I literally have nothing left in my “mom tank.” Being her mom has taught me that I’m so much stronger than I ever thought I was. I have also learned to take comfort and joy in the here and now. Most importantly, I learned to never, ever leave my kids alone with a bag full of candy.

My Daughter, the Fashion Model
The Harder Days of Being a Special Needs Parent
The Unbreakable Bond My Boys Have With Their Sister With Special Needs
advertisement

My Daughter, the Fashion Model
The Harder Days of Being a Special Needs Parent
The Unbreakable Bond My Boys Have With Their Sister With Special Needs