THE DAD MY HUSBAND COULD HAVE BEEN.

I started dating my husband when he was only 22 years old. When we first met he worked out daily,he was buff and as handsome as he was a free spirit. He never made plans, he always flew by the seat of his pants. He was chronically late to things, yet all he had to do was smile and everyone forgave him. He lost his wallet more times than I can count and he drove cars that he spent more time fixing than he did driving. But you know how young love works.. these things did not bother me when we were dating. In fact I can’t tell you how many hours I sat in his garage and watched him fix his car, or the amount of times he was late picking me up for a date.

Then we got married. And all of a sudden his constant tardiness and hours of clinking around in the garage didn’t strike me as so enduring anymore. To be honest it quickly became down right frustrating. It was enough to drive me crazy some days.

Then we had our first son. These now annoyances became even more predominant now that we had this little human in our lives depending on us for his every move. I couldn’t help but to wonder what kind of dad my husband would be. Would he be the daddy who goes out with friends more than he would be home? Would he always be too late to eat dinner with us? Would he forget the kids at the park like he would forget his wallet at the gym? Would he care more about watching sports than he would about watching his babies smiles?

The dad he could have been did not end up being the daddy he became. 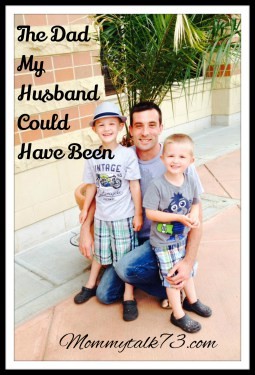 The daddy he became after our first was born was the dad I had always wanted for my children. Did he stop being late? Did he stop spending hours in the garage or watching football each Sunday? No. But what I found was that each of these things taught my children something I couldn’t. As a Type A mom, I have always planned, rushed to be on time, and organized things along the way… but my husband has taught my kids to slow down. He has taught them that while it is considerate and respectful to be on time, it’s not the end of the world to sometimes be late. He has taught them that once in a while its worth stopping and checking out how neat the moon is that night, or how pretty a bird is in the cherry tree. He has taught them how to start fixing their own things instead of always looking for something new by showing them how he can fix our cars or our lawn mowers and everything in between. The boys intently watch him restore motorcycles, and are his biggest cheerleaders when he gets the engine to rev for the very first time. He has also got them interested in not just watching sports but in playing sports themselves, and has never missed a game. And although he may still lose things at times, I can confidently say he has never lost our kids (that he has told me at least! haha) and that the daddy he has become by far exceeds the dad I had hoped for my children, and I am forever grateful for that.

Nicole is the author and creator of Mommy Talk. She is a bargain shopping, God Loving, chocoholic, stay at home mommy of three beautiful little miracles.

My Son's Dad, Our Team Captain
​He taught them to drive. And so.much.more.
My Dad
advertisement

My Son's Dad, Our Team Captain
​He taught them to drive. And so.much.more.
My Dad